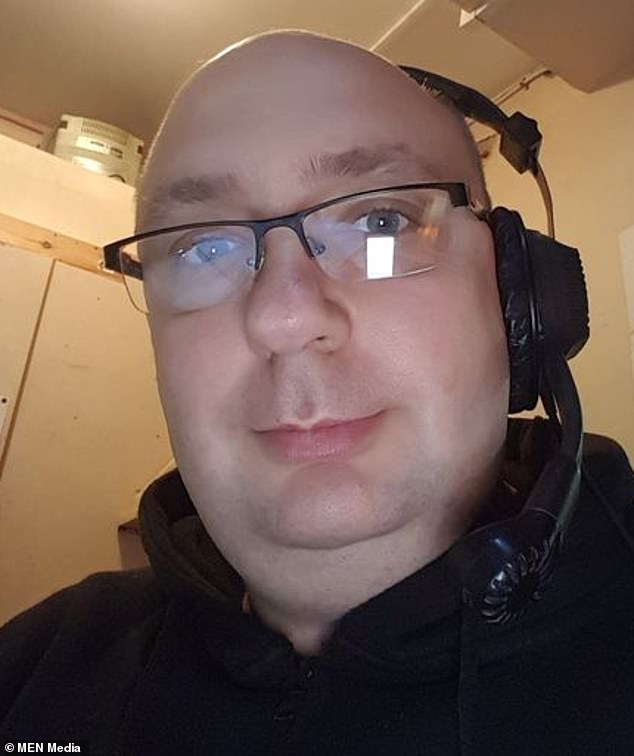 A perverted undertaker who referred to dead bodies as ‘fit’ and invited another man to the mortuary to have sex with a corpse, has been jailed for 17 years.

Nigel Robinson-Wright, 42, posed for photos next to open coffins and naked corpses and offered to supply a man with crystal meth to facilitate sexual activity in the chapel of rest, Preston Crown Court heard.

Kim Whittlestone, prosecuting, told the court that Robinson-Wright chatted to paedophiles, animal abusers and those with an interest in dead bodies using encrypted, military-grade chatrooms.

He egged on a man who was sexually abusing a puppy and arranged to meet a paedophile who was offering up a toddler to be raped.

But police exposed Robinson-Wright’s sinister sexual world following the arrest of a paedophile in London in September 2021.

Online chats between the two men led them to the funeral director, and on November 1, 2021, officers visited Robinson-Wright at his home in Blackpool, Lancashire.

Ms Whittlestone told the court a number of digital devices were seized and some were examined at the scene.

‘He was in possession of indecent images and there was evidence of him distributing images. Extreme pornography was discovered, involving torture and sexual abuse of children and animals.

‘The defendant had been in contact with others via social media and had been organising the commission of sexual offences against children, dogs and dead bodies’, she added.

One man, who seemed to be familiar to Robinson-Wright, shared sexual fantasies about the clients at the Preston funeral home where Robinson-Wright worked.

‘There was a strong theme of necrophilia where it was openly discussed between the parties’, Ms Whittlestone said.

Robinson-Wright talked about being high on poppers and crystal meth, and offered to supply drugs to the man.

In a separate chat, the defendant was in contact with a paedophile, arranging to meet him to sexually abuse a child.

However, the police intercepted the chat before the plan came to fruition, the court heard.

You gloried in it. Your targets were all powerless – babies, infants, children, the dead and animals.
Judge Graham Knowles QC, sentencing Robinson-Wright

In other conversations, he discussed his fascination with serial killer Fred West, and murdered toddler James Bulger.

Robinson-Wright gave no comment when he was interviewed by police but later pleaded guilty to: arranging the commission of a child sexual offence, three counts of making indecent images, eight counts of distributing indecent images, possession of a prohibited image of a child, possession of extreme pornography, two counts of intentionally encouraging or assisting the commission of an offence by inviting an unknown man to the mortuary and encouraging a man to sexually abuse a dog, and attempting to supply a class A drug.

Tom Lord, defending, asked for 16 other offences to be taken into consideration and said his client’s guilty plea was his best mitigation.

He said: ‘The defendant’s plea is a concession of what can only be described as licentious deviancy and a grotesque breach of trust.’

Judge Graham Knowles QC, sentencing, said: ‘These taken together are abhorrent offences. Nigel William Robinson-Wright, you cast off your own humanity and you made a choice to relentlessly pursue cruelty, degradation and depravity.

‘You gloried in it. Your targets were all powerless – babies, infants, children, the dead and animals.

When Robinson-Wright spoke to a probation officer, he described himself as an animal lover who looked after rescue cats and ferrets and said those who mistreated animals were ‘vile’.

He claimed much of what was discussed was ‘fantasy’ – but the judge rejected his claims.

He sentenced Robinson-Wright to 17 years’ custody with an eight-year extended licence period.