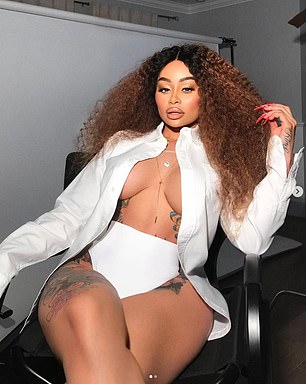 Blac Chyna was spotted leaving her house and heading to Los Angeles court for her trial against the Kardashians Tuesday.

Chyna, 33, wore a black tuxedo dress and she stepped out of a black SUV.

She’s heading to her trial to face off against Kim, Khloe Kylie and Kris, who she claims plotted against her to have her reality show axed.

The highly-publicized trial stems from a 2017 lawsuit brought by reality star Chyna, who accused the billionaire clan of deliberately plotting to have her hit E! TV show Rob and Chyna axed.

A potential juror in Chyna’s lawsuit against the Kardashians asked to be excused because he ‘can’t be neutral’ as he has watched Kim’s sex tape and ‘would be replaying it in his head’ during the proceedings.

Jury selection began Monday in Blac Chyna’s $108million lawsuit against the Kardashian. The trial is scheduled to last 10 days

During the afternoon session, Judge Alarcon empaneled jurors and asked their names, marital status, and occupation before attorneys for both sides grilled jurors on whether they felt they could render a fair and impartial decision in the case.

After a break, the same prospective juror volunteered: ‘I’m going to be playing that sex tape in my head and possibly not listening too closely…’

‘I think we got the point,’ Judge Alarcon said, cutting off the juror’s detailed account.

Judge Alarcon rounded up today’s court session by swearing in a third panel of 27 prospective jurors, bringing the pool of potential jurors to a total of 103. Twelve, plus some alternates, will be picked, most likely by the end of the day Tuesday.

On Monday, Kris Jenner and Kylie, Khloe and Kim Kardashian sat in the front row as prospective jurors aired their feelings about the famous family.

Family matriarch Kris Jenner, with short black hair and dressed in a cream pant suit, led her famous daughters into the downtown Los Angeles courtroom like a mother duck leading her ducklings.

Behind her was younger daughter Kylie, in black jacket and pants, then came her sister Kim, in a baggy gray pantsuit, with blonde-haired Khloe, in a gray jacket and dark pants bringing up the rear. Kim and Kylie both had their naturally black hair long and not tied back.