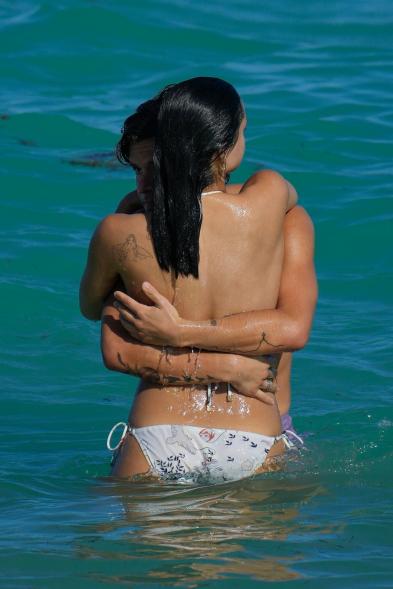 Camila Mendes rang in the new year by lavishing Rudy Mancuso with affection.

The “Riverdale” star, 28, and the YouTuber, 30, were spotted celebrating New Year’s Day in Miami Beach, when cameras captured them engaging in PDA for the first time in public as a relationship.

The Brazilian co-stars of “Msica” could not keep their hands off one another in the sea or on the beach.

The co-stars of “Msica” could not keep their hands off one another in the sea or on the beach.

Mendes put her arms around Mancuso at one point as the two laughed, grinned, and enjoyed the waves.

The creator of “Awkward Puppets” then hugged and kissed the actress from behind, on the neck and cheek.Mendes was festive during the occasion, donning a New Year’s hat and a headband at various times.

She was afterwards observed having a beverage while sitting on a lounge chair.

The “Do Revenge” star introduced her relationship with Mancuso via a cheeky Instagram carousel at the beginning of November 2022.

She captioned a sequence of seven images, two of which included her now-confirmed boyfriend, “Life update.”

The first shot depicted the unkempt-haired former Vine star sitting on the floor beside a front door while playing with Truffle, Mendes’ Maltipoo.

The second photo was a selfie of the couple taken in the reflection of a sliding glass door, in which Mancuso gave his leading woman a head kiss.

Later, the “Riverdale” star was spotted sipping a beverage while relaxing in a lounge chair.

In addition to being co-stars, Mendes and Mancuso are also executive producers on “Msica,” a modern romantic comedy co-written and directed by the comedian.

It appears that they may have fallen in love on set.

After spending the previous summer filming in New Jersey, Mancuso was pictured arriving in Italy with Mendes prior to the 2022 Venice Film Festival.

According to Just Jared Jr., the pair was afterwards spotted leaving a Halloween party together.

Mendes dated her “Riverdale” co-star Charles Melton in the past, while Mancuso was previously linked to actress Maia Mitchell.