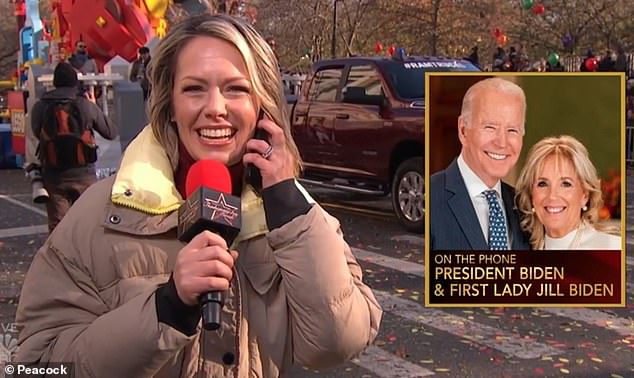 Joe and Jill Biden stopped by the Macy’s Thanksgiving Day Parade on Thursday to express their gratitude for the military and firemen while on vacation in Nantucket.

“I’d want to express my gratitude to the firefighters and police officers, who are first responders. They never take a break,’ stated the president.

“And certainly, God bless our military,” the first lady concluded.

And by the way, we will be speaking with some of our military later in the day, both here and internationally. I hope everyone recalls. We remember them each and every day. God truly bless our military,’ declared the president.

It was the second consecutive year that the Bidens participated in the annual parade. This year’s performance lineup includes Mariah Carey and Paula Abdul. There will be 27 enormous balloons and 31 floats.

Dylan Dreyer of NBC stated she was concerned that the call might not go through.

She said, “I don’t believe I can hear you; can you hear me, Mr. President?”

The Bidens could be heard speaking inaudible words.

‘Hello, Happy Thanksgiving Mr. President, “Are you there?” she questioned.

“I was so concerned that this call wouldn’t get through,” she said after the president responded.

She had to wait around 17 seconds to receive a response from the Bidens due to apparent connectivity issues. They stated that they would have supper with their family and then maybe go for a walk on the beach.

Jill Biden stated, “Well, we’re simply going to have supper with the family and possibly go for a stroll on the beach.”

Tuesday evening, the first couple, along with their son Hunter, his wife Melissa Cohen, their son Beau, and their daughter Ashley, arrived in Nantucket.

The family has returned to the opulent Nantucket estate of billionaire businessman-turned-philanthropist David Rubenstein, where they spent the holiday season last year.

The 13,000-square-foot, $20 million residence is situated on 13 acres of seaside land. It offers private beach access.

Since Biden was a senator, the Bidens have been visiting Nantucket for 46 years. On Sunday, the first couple is set to return to the White House.

Biden stated in his 2017 memoir ‘Promise me Dad’ that the first holiday he and his future wife Jill spent together was Thanksgiving in 1975, when they traveled to Nantucket with his young boys Beau and Hunter for some bonding time.

Since then, they have seldom missed a vacation in Nantucket.

The Bidens will once again spend the holidays at the opulent Nantucket estate of billionaire businessman-turned-philanthropist David Rubenstein, where they stayed last year.

The island became the site of many family memories.

Beau proposed to his future wife Hallie during the town’s 2001 Christmas tree lighting, and they were married in a downtown church.

One of the rare Thanksgivings the Bidens missed in Nantucket occurred in 2015, around six months after Beau Biden passed away. The family instead traveled to Rome. They also did not travel in 2020 due to the COVID pandemic.

When they called into the parade on Thursday, President Biden stated, “We have been coming to Nantucket with our entire family since we were first married.” It has become a custom.’

On its social media accounts, the White House also shared a Thanksgiving message from the Bidens: ‘Today and every day, we have so much to be thankful for. Happy Thanksgiving to our military personnel and their families whose loved ones are on duty and unable to be with their family. We wish you a day filled with happiness and appreciation.

»Bidens make an appearance at the Macy’s Thanksgiving Day parade«