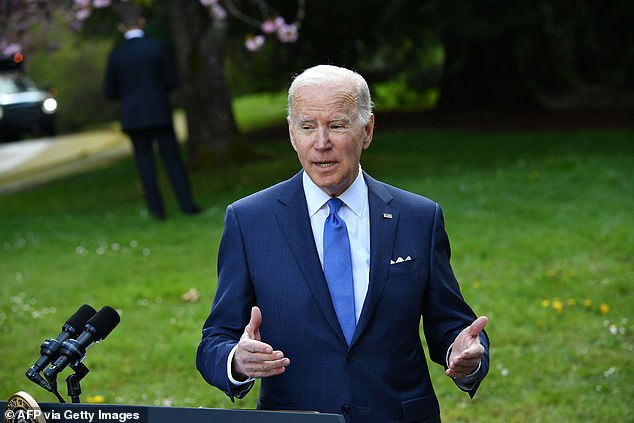 President Biden said he is ready to fork over the cash to fight climate change this Earth Day.

The president promised to spend ‘billions’ to begin a campaign to make every military vehicle climate friendly.

‘Every vehicle, no I mean it. We’re spending billions of dollars to do it,’ Biden said during Earth Day remarks in Seattle, Washington.

‘I think we’re in one of those moments in world history, American history, where we’ve reached the point the crisis on the environment, it has  become so obvious with the notable exception of the former president,’ Biden said.

The president then said his administration was working to take ‘tens of thousands’ of diesel-powered buses off the road and replace them with electric ones, as he talked about his administration’s push to get electric vehicles on the road.

‘I’m an automobile buff. I have a ’68 Corvette that does nothing but pollute the air , but I don’t drive very much.’

On #EarthDay, Biden emitted over 200,000 pounds of CO2 flying across the country on Air Force 1 to lecture Americans about the environment,’ Rep. Vicky Hartzler, R-Mo., wrote on Twitter.

Biden noted that the nation was producing windmills with blades 102 yards long that could be placed ‘way out’ in the ocean.

‘By the way I made it clear to my friends in Nantucket,’ the president said, before lower his voice to a whisper for dramatic effect: ‘I don’t want to hear any more about how you don’t like looking at them.’

Biden and his family spent Thanksgiving in Nantucket at the $30 million home of billionaire David Rubenstein.

‘By the way, windmills don’t cause cancer,’ Biden gibed, making a reference to a claim from former President Trump.

‘If you have a windmill anywhere near your house, congratulations, your house just went down 75 percent in value. And they say the noise causes cancer,’ Trump said in 2019, adding that windmill farms are a ‘graveyard for the birds.’

Biden reiterated his goal of having the U.S. reach net-zero emissions by 2050, as he touted the bipartisan infrastructure plan’s provision of planting 1.2 billion trees across the country.

The president said he had spent time in the Amazon rainforest in Colombia and Brazil, which for centuries served as a carbon sink to suck CO2 out of the air.

‘More carbon is taken out of the air in the Amazon – that carbon sink – than every bit of carbon that is generated on a daily basis in the entire United States from every source,’ Biden said.

The source of the president’s claim is unclear – a widely publicized study from Brazil’s National Institute for Space Research found that much of the Amazon is now emitting more CO2 than it takes in.

Biden then suggested paying Brazil not to cut down its rainforests.

Biden also touted his crackdown on cement, a substance alone which is responsible for 8 percent of the world’s carbon emissions.

‘I set new standards for cleaner cement. Cement is an incredible pollutant.’

And after the speech, he signed an executive order to protect and promote forests in the U.S.

‘There used to be a hell of a lot more forest like this, but we’re doing everything we can, everybody behind me and all of you, to protect what we have and increase what we have,’ he said.

The order directs the federal government to set new reforestation targets for 2030 and directs the Departments of Interior and Agriculture to log old-growth forests and implement new measures to protect them.

And while Biden has faced a barrage of criticism from climate groups who say he has not done enough for the environment, the president said it was time to ‘overtake’ Republicans in Congress who oppose new climate spending.

‘I just think this is the beginning of a new day and we’re gonna just have to overtake the opposition on this. I really mean it,’ Biden said.

‘This ain’t your father’s Republican Party. Not a joke … Anyway, but all kidding aside, this is a MAGA party now…These guys are a different breed of cat.’

The president has recently pivoted from reining in the oil and gas industry to demanding they pump more fuel amid Vladimir Putin’s invasion of Ukraine.