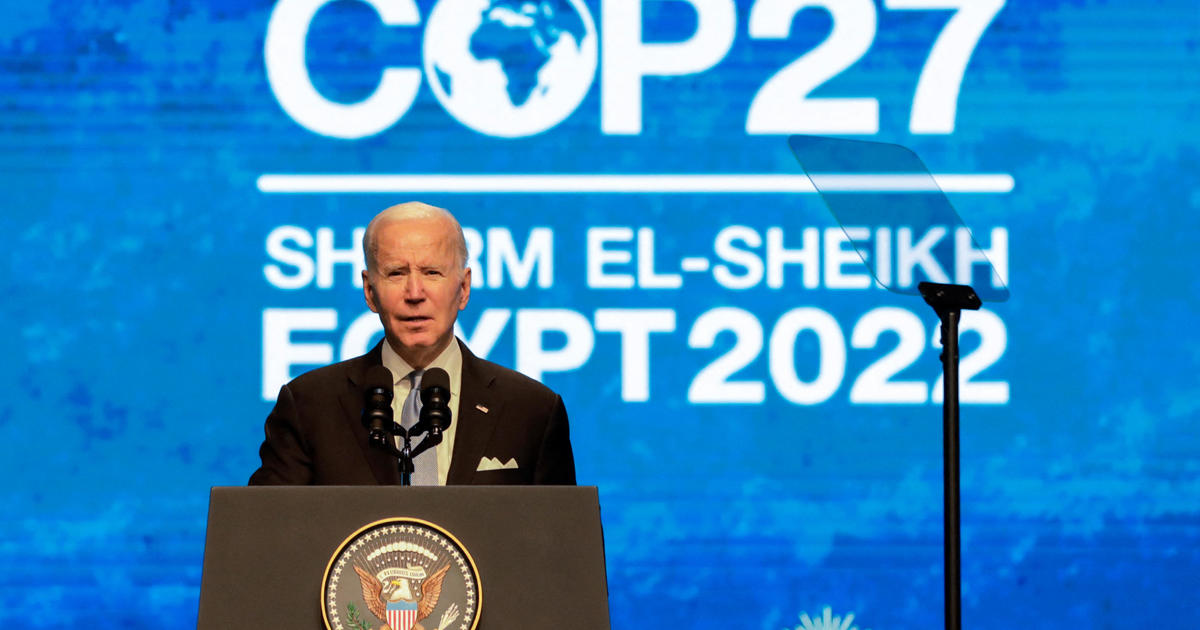 Friday at a climate conference in Egypt, President Joe Biden said that the United States will do its share to prevent a “climate hell,” alluding to U.N. Secretary General António Guterres’ ominous warning that “we are on a motorway to climate hell with our foot on the accelerator.” Guterres informed global leaders on Monday that the planet is quickly nearing “tipping points that would render climate calamity irreversible.”

Mr. Biden praised U.S. climate efforts at home and abroad and expressed “confidence” that the country will meet its carbon goals by 2030.

Mr. Biden stated at COP27 that “we are demonstrating that smart climate policy is also good economic policy.” “It is a solid basis for persistent, resilient, and inclusive economic growth that is driving advances in the private sector and throughout the globe.”

Mr. Biden will also attend a conference of Southeast Asian leaders in Cambodia and a Group of 20 summit meeting for the leaders of the world’s major economies in Bali, Indonesia, during his around-the-world journey.

Mr. Biden cited Russia’s invasion of Ukraine as justification for diversifying away from fossil resources and encouragement for international cooperation.

Mr. Biden stated, “Given this context, it is more important than ever that we double down on our climate commitments.” “Russia’s conflict simply heightens the imperative to wean the globe off fossil fuels.” True energy security necessitates that all nations reap the benefits of a clean, diversified energy future. Without a nation’s knowledge that it can wield energy as a weapon and hold the global economy hostage, no action can be taken. It must cease. Consequently, this conference must be the occasion to renew our commitment to the future and our collective ability to write a better tale for the world.”

Mr. Biden immediately met with Egyptian President Abdel Fattah el-Sisi upon his arrival in Egypt. Mr. Biden was greeted by el-Sisi, who, via a translator, stated that, given the presence of U.S. reporters, he wished to discuss broader concerns in the Middle East. Human rights are at the “heart of discourse,” according to el-Sisi, who claims Egyptians have adopted a “complete approach” to human rights by establishing a national academy for human rights.

Mr. Biden praised the Egyptian president for his assistance in addressing climate change and for hosting the meeting. Mr. Biden congratulated el-Sisi for Egypt’s “strong” stance with the United Nations with regards to the Russian invasion of Ukraine. According to Mr. Biden, the two presidents will address human rights.

The U.S. president came in Egypt emboldened by the Democratic Party’s stronger-than-expected performance in Tuesday’s midterm elections, the ratification of the greatest climate investment in U.S. history by Congress this year, and Russian military failures on the Ukrainian battlefield.

Mr. Biden is speaking at the climate conference on a new supplementary rule that will go into effect on Friday to restrict methane emissions, a step that expands on a similar regulation his administration issued last year.

Unlike earlier Environmental Protection Agency restrictions, the 2021 rule targeted emissions of methane, a strong greenhouse gas that contributes significantly to global warming, from existing oil and gas wells across the country. However, this year’s legislation goes a step further and targets all drilling sites, even tiny wells that release less than 3 tons of methane annually.

In addition, he highlighted one of his major domestic achievements: the Inflation Reduction Act, the Democrats’ enormous health care and climate change plan.

The U.S. contribution of around $375 billion over a decade to combat climate change provides Vice President Biden with additional power to encourage other governments to fulfill their commitments to decrease greenhouse gas emissions and shift the global economy to cleaner energy sources.

The president will be in a far different position than he was at last year’s meeting, which occurred amid a very difficult period on the bill’s long journey to passage.

This conference resulted in new global pledges to fulfill the temperature objectives outlined in the Paris Climate Accord, which Mr. Biden rejoined after his predecessor, Donald Trump, withdrew the United States from the agreement.

According to the White House, Mr. Biden also urged all major polluting nations to “align their ambition” with the international objective of attempting to limit future global warming to 1.5 degrees Celsius (2.7 degrees Fahrenheit) in his speech.

However, despite these reinvigorated efforts, the United States and the rest of the globe still have a long way to go in order to fulfill emission levels that scientists think would limit global warming. Moreover, as the global economy faces fresh headwinds, the political desire to invest more is diminishing.

Wednesday at the COP27 summit, climate activist and former Vice President Al Gore referred to Mr. Biden as a “climate hero in my book” and stated that “the passage of the Inflation Reduction Act represents the most significant pro-climate legislation ever passed by any nation in the history of the planet.”

Mr. Biden stated that the United States supports Global Shield, an international initiative designed to safeguard poorer nations from “climate-related losses” and “climate-related harms.” Loss and damage are at the forefront of climate negotiations. This is international negotiating jargon for requesting wealthy nations, such as the United States, the most polluting nation in history, to pay for damages caused to poorer, more susceptible nations that release less heat-trapping carbon dioxide.

In the past, the United States was opposed to even discussing the matter, but it has now changed its attitude and consented to its discussion. John Kerry has even acknowledged it in public remarks. However, the United States does not want responsibility to be a part of any agreement, and Congress and the public have been reluctant to embrace various sorts of climate help, with this being the most problematic.

Michael Oppenheimer, a professor of climate and global politics at Princeton University, said, “I hope the U.S. will say something positive about loss and damage” because it would move forward a critical problem.

After Russia’s invasion of Ukraine, the turmoil on the world’s energy markets muted the global enthusiasm for transitioning away from fossil fuels. Biden is pressuring oil and gas companies at home and abroad to increase output to satisfy demand and reduce prices that have fueled the Kremlin’s war campaign.

Mr. Biden leaves Washington while votes are still being counted in crucial elections that will determine control of both houses of Congress. Nonetheless, the president felt the wind at his back as Democrats outperformed expectations. While he was abroad, he was certain to learn the results of the races that will have a significant influence on his capacity to get things done in Washington.

Thursday, Egypt’s foreign minister Sameh Shoukry told The Associated Press that he interpreted Mr. Biden’s visit to Sharm el-Sheikh as “an indicator of the political resolve to carry the process forward” in terms of combating global warming.

“We hope… it will resonate within the collective will of the negotiating groups to which the United States is a party, as well as create momentum for the conference, so that the parties deliver what is expected,” he stated.

National security adviser Jake Sullivan stated that the president and other senior officials would advocate for the release of imprisoned Egyptian pro-democracy activist Alaa Abdel-Fattah, whose family was told by prison officials on Sunday that he was undergoing an unspecified medical intervention in the midst of an intensifying hunger strike.

After a brief stop in Egypt, the president will go to Cambodia for a meeting of the Association of Southeast Asian Nations to reaffirm the United States’ commitment to the region in the face of China’s growing aggression.

The president will then hold his first meeting as president with the newly empowered Chinese President Xi Jinping in Indonesia. Xi Jinping was awarded a norm-breaking third, five-year term as the Chinese Communist Party leader at the party’s national congress last month, amidst deteriorating U.S.-China relations.

The White House has been coordinating the meeting with Chinese officials for the past few weeks. Mr. Biden told reporters on Wednesday that he planned to address with Xi the rising tensions between Washington and Beijing over Taiwan, trade policy, Beijing’s connection with Russia, and other issues.

Mr. Biden stated, “When we speak, I want to lay out each of our red lines and understand what he considers to be in China’s vital national interests and what I know to be the vital interests of the United States.” “Determine if they are in conflict with one another.”

Mr. Biden will also meet with two essential new allies in the campaign to bolster Ukraine’s defense: the British Prime Minister Rishi Sunak and the Italian Prime Minister Giorgia Meloni. President Vladimir Putin said on Thursday that he would not attend the events, so avoiding an embarrassing confrontation. Sullivan stated that the president has no intentions to engage with Sergey Lavrov, who is attending in place of Vladimir Putin.

Mr. Biden will also address North Korea’s nuclear and ballistic missile programs with the presidents of South Korea and Japan during a trilateral summit in Cambodia.