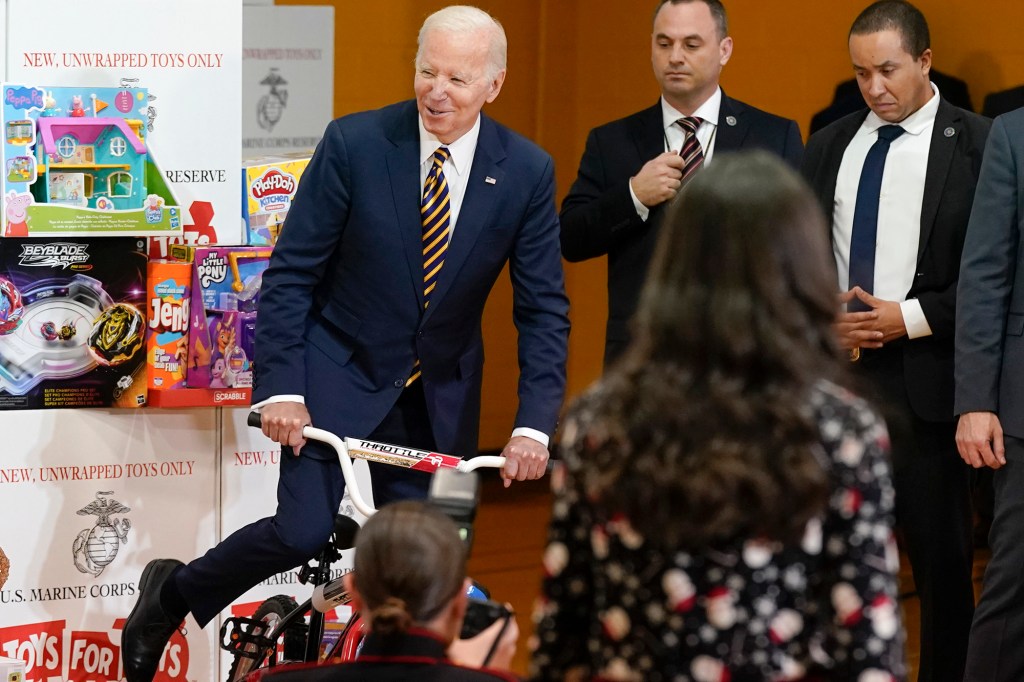 This time, at least, he did not fall off.

President Biden jokingly crouched behind the handles of a child-sized bike Monday during a Toys for Tots charity event in northern Virginia.

The oldest president in history, 80 years old, displayed his inner child by sorting donated gifts at Joint Base Myer-Henderson Hall in Arlington.

Biden squatted atop the Throttle TR bike before handing it over to a young-at-heart assistant who rolled it over to donation bins for less fortunate children prior to Christmas.

Monday’s bike encounter fared better for the president than when he took a tumble off his adult-sized two-wheeler while spending a June weekend at his summer home in Rehoboth Beach, Del.

Biden’s preferred bicycle is a Trek FX 1 Disc, which a source described as “old” after his June fall.

The source, a former Trek employee, told The Post at the time, “I see nothing wrong with him riding a bicycle at his age.” However, he needs a bike that is easy to mount and dismount.

Before assisting with the donations, the president delivered brief remarks to the families of Marine Corps personnel.

“Jill and I are aware of your sacrifices,” stated the commander in chief. “When our son Beau was sent to Iraq, it was painful to gaze at the empty chair at our table every night during the holidays. And it was difficult for our granddaughters on Christmas morning when their father was not present.”

President Biden laughed with children at a Monday event for sorting donations.

“You must be courageous, even though your parents are far away. Biden told youngsters seated before him, “They are extremely proud of you.”

Biden added, while holding the hand of the child who had introduced him and heading toward the objects to the tune of “We Wish You a Merry Christmas,” “Let’s begin sorting these gifts.”

First lady Jill Biden also spoke, telling the audience that she fondly remembered dressing up as the grinch from “How the Grinch Stole Christmas” while her spouse was vice president.

Just prior to jumping up and down on the little bicycle, the president fielded a question from the press corps observing

A journalist questioned if he authorized the deployment of US troops to Ukraine, presumably referring to an NBC News report on a “single digit” deployment of soldiers to strengthen a handful dozen already present in Ukraine to track US military donations.

“Are we deploying soldiers to Ukraine? No, we’re sending materiel like we’ve had, billions of dollars [worth],” Biden said before rushing over to the bike at his only scheduled public appearance of the day.

Politicians typically hesitate from being photographed astride unorthodox modes of transportation for fear of looking silly. In 1988, Democratic presidential candidate Michael Dukakis was ridiculed for test-driving a tank.

Biden has maintained a quiet profile throughout the lame-duck session, despite the fact that Democrats performed considerably better than predicted in the midterm elections last month, extending their Senate majority and narrowly losing the House.

On Friday, the president taped his first major sit-down TV interview since avoiding a feared “red wave” victory, but he gave it to actress Drew Barrymore for a CBS daytime special that will air on December 19.

Although Republicans will command a minimal majority in the House next year, they’re threatening robust probes of what they call Biden family criminality.

The new leaders of the House Judiciary and Oversight committees, Reps. Jim Jordan (R-Ohio) and James Comer (R-Ky.), respectively, say they will attempt to prove that Joe Biden was involved with and benefited from first son Hunter and first bother James Biden’s abroad consulting work.

Joe Biden disputes that he knew about or benefited from his family’s foreign accounts, but documents reveal he interacted with his family’s associates from China, Kazakhstan, Mexico, Russia and Ukraine, including while he was the current vice president and held sway in those nations.

In text conversations to his daughter, Naomi, Hunter Biden allegedly stated in 2019, “I hope you all can accomplish what I did and pay for everything for this entire family for 30 years… It’s incredibly hard. However, unlike Pop [Joe], I will not require you to give me half of your salary.”