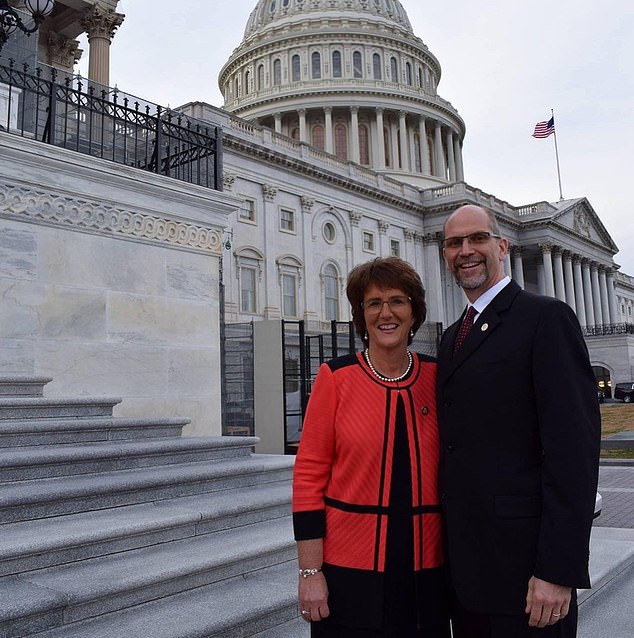 The move comes just two days after the president, 79, mistakenly referred to the late Representative Jackie Walorski at a Wednesday speech in Washington.

White House officials struggled to spin the latest of the president’s gaffes in the immediate aftermath, with Press Secretary Karine Jean-Pierre claiming that Biden had the Indiana lawmaker at the ‘top’ of his mind due to the bill signing.

She stated at the time that Biden “expects to discuss her incredible legacy of public service with her family when he sees them next Friday.”

During the event, the White House was also scheduled to screen a video tribute to Walorski.

Friday, however, Jean-Pierre appeared to take a different stance, stating that it was a private moment between the president, House Minority Leader Kevin McCarthy, and Walorski’s friends.

As you are all aware, we do not arrange every law signing, she told reporters, adding, ‘As you can guess, this was a personal moment for the president.’

As I indicated in the briefing a few days ago, the president has been looking forward to hosting the family of the deceased representative and other legislators to celebrate her legacy.

On Friday, President Joe Biden prohibited cameras from a bill signing to rename a Veterans Affairs clinic in honor of a deceased lawmaker, only days after he mistakenly shouted her name.

Walorski, who was 58 years old at the time of her death, was one of four individuals killed in a head-on collision on August 3, 2022, while returning from an event in Claypool, Indiana. Here, she is photographed with her husband.

Friday, White House Press Secretary Karine Jean-Pierre declared that the signing of the law was a “personal moment.”

Walorski, who was 58 years old at the time of her death, was one of four individuals killed in a head-on collision on August 3, 2022, while returning from an event in Claypool, Indiana.

The additional fatalities included the driver of the other vehicle and two members of the lawmaker’s staff: communications director Emma Thomson, 28, and district director Zachary Potts, 27.

At the time of her demise, Biden issued a statement and stated that the White House flags would fly at half-staff in her honor.

Wednesday, he addressed the throng gathered at the White House Conference on Hunger, Nutrition, and Health in Washington, D.C., and he seemed to have completely forgotten about this.

The president commended lawmakers for their work on a plan to abolish hunger in the United States by 2030 when he abruptly inquired about the location of Walorski.

“Jackie, are you available?” Biden interrupted his own remarks by saying.

Who is Jackie? She cannot be here, concluded Biden.

Biden, 79, cited the late congresswoman while expressing gratitude to members of both parties for their support of his plan to eradicate hunger in the United States.

Jean-Pierre consistently asserted that the president did not forget that Walorski was deceased, prompting the White House to provide a convoluted and absurd reason for the president’s search for the deceased representative.

She claimed that it is ‘not unusual’ for people to mention the names of departed people when they are ‘at the forefront of one’s consciousness,’ a term she repeated throughout her briefing on Wednesday in response to inquiries from CNN, CBS, and The Washington Post.

When asked if having her “at the forefront of his consciousness” also implies that he believes she is alive and in the room, she responded, “I don’t find that confusing.”

She stated, “I mean, I believe there are many individuals to whom you can communicate when you have a certain person in mind.”

The reporter then became sarcastic with Jean-Pierre, seeking an answer by adding, “I think of John Lennon nearly every day, but I’m not looking for him.”

“When you sign a bill appointing John Lennon as president, then we can have this conversation,” she added, causing bewilderment and uproar in the briefing room.

Jean-Pierre stated repeatedly that Joe Biden was only speaking out for the late Representative Jackie Walorski on Wednesday because she was “at the forefront of his mind” because of the imminent bill signing.

Doug Adres, press secretary for Senate Minority Leader Mitch McConnell, became frustrated with the manner in which Jean-Pierre handled the incident, tweeting, “Just admit he made a mistake!” good grief’.

A spokeswoman for Senator Ted Cruz of Texas stated that this day will go down in history as the first time the press acknowledged Biden’s mental unfitness.

Recall where you were on September 28, 2022, tweeted Steve Guest. It is now OK for the White House Press pool to acknowledge that Joe Biden has dementia.

Jean-Pierre stated, “I believe the American public, who, you know, occasionally watches the briefing, will realize when someone is in the forefront of their minds.”

She replied, “I don’t believe it’s all that odd to have someone in the forefront of your mind, especially with a major event occurring today and another on Friday.” Therefore, he will visit her family, who will pay tribute to her and celebrate her life.

After her passing last month, the president ordered the flag to be flown at half-staff. Here, the 56-year-old representative is pictured with her family.

Biden and Jill Biden issued a statement in August following the deaths of Walorski and two of her staff members.

Keith Walorski, Jackie’s brother, stated that he was not unhappy with the president for the blunder and that he had spoken with Vice President Joe Biden after the terrible incident last month.

Instead, Keith expressed pity for the president, stating that Biden is “doing the best he can with what he has at the moment.”

According to him, this is par for the course for the 79-year-old.

Keith did concede, though, that it is “a polite way of saying” that Biden is forgetful owing to his advanced age.

Walorski told the New York Post, “I don’t believe anyone would look at what he’s done and said and conclude that his mind is as keen as it once was.”

The deceased Representative’s brother remarked that Biden was’very sincere’ when he called the family following his sister’s murder, noting that Biden had been through the same experience.

“All I can say about the president right now is bless his heart for trying. Indeed, today was a major disaster. Inexcusable? No. Unforgivable? No. I will not hold this against him. I just feel sad for him.’