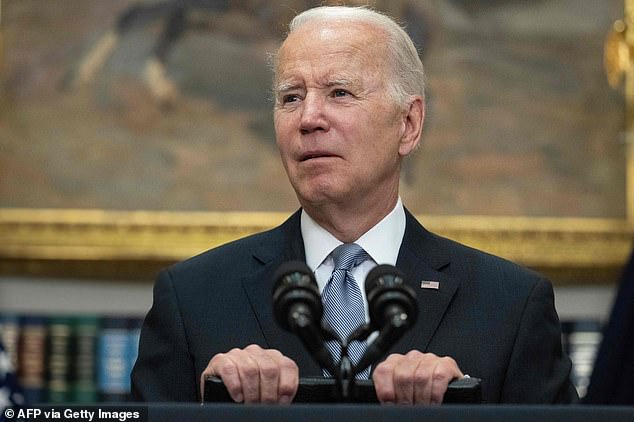 President Joe Biden on Thursday insisted he is not considering extending the use of Title 42 at the border but also appeared to confuse the issue with Justice Department’s decision to appeal a court ruling that drops federal mask requirements on public transportation.

The White House put out statement clarify the president’s remarks due the confusion.

Biden is under political pressure from vulnerable Democrats – particularly those running for re-election this year in border states – about the expected surge in migration expected to come after Title 42 is lifted on May 23. Republicans also have heavily criticized the president on the issue.

And when asked if he was considering a delay in lifting Title 42, Biden said. ‘No.’

But then he appeared to confuse Title 42 with the Justice Department’s decision to a appeal a ruling that struck down the federal mask mandate on planes, trains and transit systems.

‘No, what I’m considering is continuing to hear from my – first of all, there’s going to be an appeal by the Justice Department because as a matter of principle, we want to be able to be in a position where if in fact, it is strongly concluded by the scientists that we need Title 42 that we’d be able to do that. But there has been no decision on extending Title 42,’ he said.

After Biden’s remarks, the White House put out a statement from the president clarifying what he said.

‘I want to clarify that, in comments at the conclusion of my remarks this morning, I was referring to the CDC’s mask mandate and there is no Department of Justice action on Title 42,’ Biden said in the statement.

Biden and his administration has come under fire for mixed messaging on covid precautions, particularly as the case rate drops in parts of the country.

Meanwhile, the Centers for Disease Control and Prevention requested the DoJ appeal ruling that ended the federal mask mandate on public transportation. It was also the CDC that said the use of Title 42, which has been used to turn away more than 1.7 million people at the border, is set to end May 23.

Title 42 is a Trump-era order that allowed US border officials to turn migrants back to Mexico or their home countries immediately because of the covid pandemic.

‘Right now we are planning and preparing for the end of Title 42 enforcement on May 23rd,’ White House spokesperson Jen Psaki said on Wednesday.

She noted that President Biden wants to reform the immigration system and that some lawmakers favored a delay of Title 42 implementation while others oppose it.

‘This would all require congressional action. We’re happy to have that conversation with them,’ she said.

Democrats fret the May 23 end is not enough time for the administration to come up with a plan to handle the expected flood of migrants.

And Republicans have turned it into a campaign issue ahead of November’s midterm election, which will decide which party controls Congress.

The White House has been dealing with anxious lawmakers as Democrats fret about keeping control of Congress.

Democratic Senator Kyrsten Sinema has led a bipartisan group of senators in proposing legislation to prevent Title 42 from being lifted without a plan in place to stop an expected surge of migrants at the border.

Her home state of Arizona sits on the border.

She has called on the administration to extend the order.

‘The administration’s extension of public health emergency authorities proves the need to delay lifting Title 42 to protect the health and safety of Arizona communities and migrants. I’ll keep pushing for transparency and accountability from the administration to help secure the border, keep Arizona communities safe and ensure migrants are treated fairly and humanely,’ she said in a statement last week.

Her fellow Democratic Senator from Arizona, Mark Kelly, also voiced concern about lifting the order – particularly without a plan to combat the expectant increase in migrants.

Democratic Senator Maggie Hassan of New Hampshire, who is facing one of the toughest re-election campaigns, visited the border to see the situation for herself and promptly called on the administration to extend the order.

‘My trip to the southern border reinforced my concerns about the administration preemptively ending Title 42,’ Hassan said. ‘Border agents were very clear with me that the end of Title 42 will lead to a steep increase of attempted crossings that they will not be able to effectively handle because they don’t have enough resources.’

US Customs and Border Protection had 221,303 encounters at the US-Mexico border in March, which marked yet another jump in arrests along the southern border. CBP has already apprehended more than 1 million people this fiscal year, which began on October 1.

Meanwhile, the CDC this week asked the Biden administration to appeal a Florida judge’s ruling against the mask mandate for travelers – setting up a legal battle after days of confusing signals on government policy.

‘It is CDC’s continuing assessment that at this time an order requiring masking in the indoor transportation corridor remains necessary for the public health,’ the CDC said in a Wednesday statement.

‘CDC believes this is a lawful order, well within CDC’s legal authority to protect public health.’

It said it would continue to monitor public health conditions – which have seen a rise in coronavirus infections – and called it ‘well within CDC´s legal authority to protect public health,’ despite the judge’s ruling otherwise.

The DoJ is handling the appeal but has not asked the appeals court to block the judge’s order that lifted the federal mask mandate on transit systems, meaning passengers will be able to continue traveling maskless while the decision is litigated.

The flurry of activity came after Donald Trump-appointed U.S. District Judge Kathryn Kimball Mizelle of Florida ruled against the policy – triggering the administration to stop enforcing it and airlines to roll back their own enforcement.

The appeal will send the legal fight to the Atlanta-based 11th Circuit Court of Appeals, where there are seven Republican-appointed judges and four appointed by Democrats.

The feds filed a notice of appeal in federal court in Tampa.

The battle could end up in the Supreme Court, which earlier this year struck down a vaccine mandate for large private businesses in a 6-3 ruling.