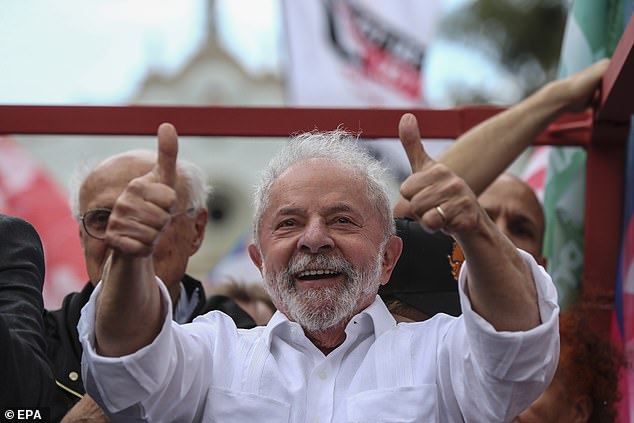 Bolsonaro, who is sometimes compared to Donald Trump, will break his silence on Monday afternoon, but there are concerns that the far-right populist may fight Lula’s victory.

Biden and other foreign leaders have been ready to confirm Lula’s legitimacy by calling him.

According to a White House summary of the conversation, Biden praised the robustness of Brazilian democratic institutions following free, fair, and legitimate elections.

The White House reported that the two leaders discussed the strong relationship between the United States and Brazil and agreed to continue working as partners to address common challenges such as combating climate change, ensuring food security, promoting inclusion and democracy, and managing regional migration.

Lula, 77, led Brazil between 2003 and 2010. His election victory follows a stint in prison for convictions of corruption that were later overturned.

The Supreme Electoral Court (TSE) announced that Lula received 50.9% of the vote versus Bolsonaro’s 49.1%, making Bolsonaro the first sitting Brazilian president to lose an election.

However, before to the election, Bolsonaro consistently made unfounded assertions that the electoral system was susceptible to fraud.

Lula’s inauguration is slated for January 1.

Lula declared at his campaign headquarters, “I will govern for all 215 million Brazilians, not only those who voted for me.” “We are one nation, one people, and one wonderful country,”

His victory was a response to the fiery far-right populism of Bolsonaro, who came from the back benches of Congress to form a conservative alliance but lost popularity as Brazil suffered one of the greatest coronavirus pandemic deaths.

Lula has pledged a return to state-driven economic growth and social measures that helped millions of Brazilians escape poverty during his two terms as president.

The administration of Lula, a former union leader born into poverty, was distinguished by a commodity-driven economic boom, and he departed office with record popularity.

However, his Workers Party was later tarnished by a severe recession and a record-breaking corruption scandal that landed him in jail for 19 months on bribery convictions that the Supreme Court overturned last year.

Throughout the first part of the count, Bolsonaro was in the lead, but as soon as Lula passed him, motorists in central Sao Paulo began blasting their horns.

People in the Ipanema neighborhood of Rio de Janeiro could be heard exclaiming, “It turned!”

Bolsonaro, 67, who has made unfounded assertions for years that Brazil’s voting system is susceptible to fraud, openly considered refusing to recognize the results of the election last year.

According to Reuters sources, electoral authorities are preparing for him to contest the results and have made security arrangements in case his followers launch protests.

Two hours after election officials pronounced Lula the victor, neither Bolsonaro nor his campaign had made any public statements regarding the outcome.

Lula promises to govern outside of his socialist Workers’ Party. He desires to recruit centrists and even those right-leaning voters who supported him for the first time, and to restore the nation’s prosperous past.

In a politically polarized culture where economic development is stagnating and inflation is surging, he faces headwinds.

His triumph extends a wave of previous leftist successes in the region, including Chile, Colombia, and Argentina. It is the first time since Brazil’s restoration to democracy in 1985 that the incumbent president has failed to win reelection.

Thomas Traumann, an independent political analyst, drew a parallel between the results and Biden’s victory in 2020, stating that Lula will inherit a deeply divided nation.

“Lula’s greatest challenge will be to bring peace to the country,” he said. Not only are people divided on political issues, but they also have different values, identities, and opinions. Moreover, they do not care about the opposing side’s values, identities, or opinions.’