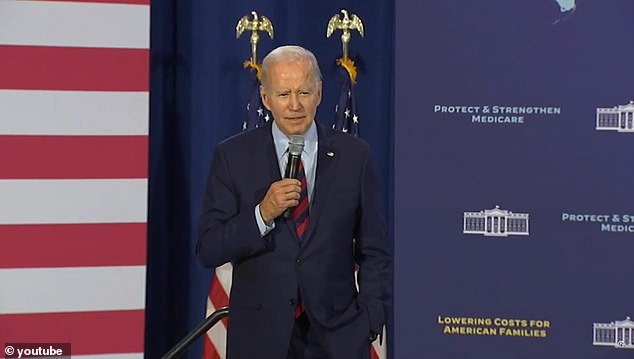 On Tuesday night in Florida, Joe Biden gave a speech that was unusually full of mistakes, including confusing the terms senator and representative, asserting that the United States had among of the lowest inflation rates worldwide, and misrepresenting that his son Beau died in Iraq.

The president planned to highlight his accomplishments while campaigning at three different cities throughout the state.

Instead, he confused his audience with an absurd array of assertions.

In the US Senate, he said, “I don’t have a better buddy.”

And neither as president nor vice president did I have a better buddy.

He said that the United States had low inflation in Hallandale Beach, a Miami suburb 20 miles north of the city center, and managed to repeat his son Beau’s death in Iraq.

Beau Biden, the former attorney general of Delaware and a member of the Delaware Army National Guard during the Iraq War, passed away from brain cancer in 2015 at the age of 46.

In Bethesda, Maryland, at the Walter Reed National Military Medical Center, he died away.

The president has long claimed that Beau’s brain cancer was caused by his military service and the usage of burn pits.

“In my opinion, while I can’t yet prove it, he returned with stage 4 glioblastoma.” In 2019, Biden said, “He knew he was going to die, yet he survived for eighteen months.

In an earlier speech at Camp Hale in Colorado last month, Biden said that Beau had passed away in Iraq.

According to Biden, “the conflict in Iraq and its effects on energy, what Russia is doing — excuse me, the war in Ukraine — and other factors are causing inflation to be an issue across the globe right now.”

And since my son died in Iraq, I’m thinking about that country right now. because he passed away.

But, you know, that’s why it’s up, the idea is that there.

Compared to practically all other large nations, we have the lowest inflation rate. We’ve made a lot of efforts to try to regulate it.

According to statistics from September, the Consumer Price Index is now showing 8.2% inflation in the United States.

According to the OECD’s most recent statistics from August, only Italy and the United Kingdom among the G7 had higher inflation rates.

Germany, France, Canada, and Japan are all outperforming the United States; for example, in Canada, inflation was 7.1 percent, compared to 5.91 percent in France and 3 percent in Japan.

In a particularly confusing section, he said, “And I’ll conclude this — speak about inflation.”

“Go ahead and give free reign to pharma firms if you want to increase the expense of life on seniors. See what these pharmaceutical businesses have done.

Republican members of Congress are supporting them.

Watch what happens to the cost of living for hardworking Floridians if Social Security and Medicare are cut. I refer to it as inflation.

If you don’t have any money at the end of the month, what’s left is inflation. What are you doing, and are the things you need increasing? They do. They do.

For his assertion on insulin and its pioneers, Biden was also made fun of online. The cost of insulin for diabetics has been decreased, one of his most notable accomplishments.

“Okay, you know how much it cost to create that diabetic medication called insulin?” Asked the audience, Biden.

It was created by a guy who chose not to patent it because he wanted everyone to have access to it.

“I talked to him, all right? And what’s this? It was made for ten dollars. To earn ten dollars.

And you could perhaps get it up to $15 if you include packaging and everything.

Guess what, though? They won’t be required to pay more than $35 each month. Instead of an average of $400 each month, they’ll still be in the black.

Banting passed away in 1941, the year before to Biden’s birth.

Best passed away in 1978, five years after Biden was chosen to serve in the Senate, so a meeting is not ruled out but is also not certain.

With just one week before the midterm elections, Biden was in Florida to battle the Republicans.

It’s a matter of importance in a state with a high population of seniors, and Biden attacked the GOP for seeking to slash social services in his address to a senior center.

He said, “I’m in Florida today to discuss two very, very, very significant initiatives.” “It’s going to impact more Americans than anything else,”

‘Under assault by our Republican pals,’ he said of Social Security and Medicare.

In his closing remarks, Biden expressed his wish for God to “send some of our Republican friends some wisdom.”

He claimed that when individuals retire, they should have “peace of mind.” And he said that Medicare may now bargain over the cost of prescription drugs.

Additionally, he noted that under his leadership, “you can witness again an increase in their Social Security and Medicare” – a statement that was warmly greeted by cheers.

Checks will thus be raised. The fact that Medicare rates would decrease is significant for seniors, he added.

“Let me make a statement. I want to make a distinction. They discuss the wealthy Democrats. Yes, I spent a lot of money on these activities, but consider the following, he replied.

He whispered, “We lowered the deficit in half,” to emphasize his point.

The president was obviously irritated by the Republican response to his criticism of his handling of the economy.

Voters’ main worries are the economy and inflation, and they give Biden poor grades for managing both of these topics.

I need a break. As he paced on stage, Biden uttered the words, “I’m so sick and I shouldn’t get. But the audience clapped and supported him.

The president urged the throng, “Google, I’m serious, as my granddaughters used to say.”

Republicans have come under fire from Biden for attempting to alter the two major social programs offered by the government.

Sen. Rick Scott, a Republican from Florida, has been singled out by the president in his criticism of the GOP on several occasions for his policy suggestions.

On Tuesday in Florida, he repeated the action.

Scott’s proposal to bring Medicare, Social Security, and other government programs up for a vote every five years was read out as he held up a brochure.

He asked, “A senator from Florida attacking Social Security and Medicaid?”

You may not even be able to believe it. once again, word for word. Every federal law has a sunset clause, which implies it expires after five years.

According to Biden, “These programs accomplish something so fundamental and so vital.”

Biden began his speech by outlining all the support his government has given the region as it works to recover from Hurricane Ian.

The crowd cheered, whooped, and applauded when he announced that the federal government had authorized $1.7 billion in federal funding.

Despite avoiding some of the more crucial races like Georgia, Nevada, and Arizona, Biden will campaign in Florida for Democratic gubernatorial candidate Charlie Crist and Senate candidate Val Demings.

With a copy of Jon Meacham’s most recent book, “And There Was Light: Abraham Lincoln and the American Struggle,” Biden traveled aboard Air Force One.

The biography examines how, both before the 1864 election and throughout the Civil War, Lincoln put his principles and the abolition of slavery ahead of his personal destiny.

According to surveys, Biden may have a similar outcome in the 2022 midterm elections, with Republicans likely to firmly seize control of the House and have a chance of obtaining a majority in the Senate.

This is the book’s whole thesis. At pivotal moments, he would have made quite different choices if he had just been a cynical political creature.

Republican governor Ron DeSantis, who is running for reelection, is ahead of Crist in the polls.

And in a race that will determine which party controls the Senate in the next year, Deming is up against Republican Senator Marco Rubio.

As Americans get ready to cast their ballots on November 8, the president, who is struggling with low support numbers, is spending his last week on the campaign trail attempting to contrast how his Democrats would rule vs Republicans.

Over the following seven days, he will make appearances in New Mexico, Pennsylvania, and Maryland where he will present his closing defense.

»Biden confuses senator for representative in his speech«