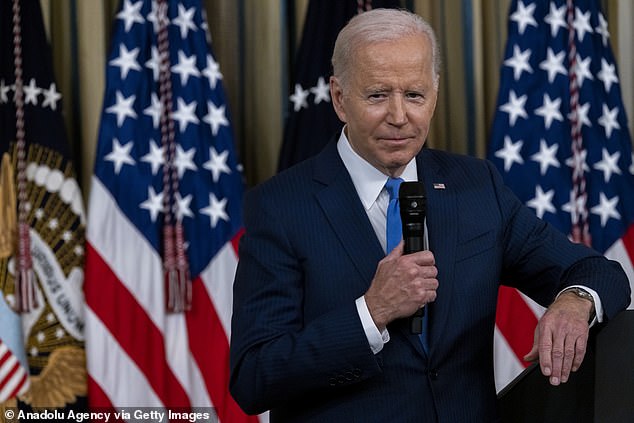 President Joe Biden lauded a new report indicating a decline in inflation as “progress” and evidence that his economic plan is succeeding on Thursday.

The annual rate of core inflation, which excludes volatile food and energy costs, fell to 6.3% from a four-decade high of 6.6% in September.

Biden stated that the dropping number indicates “we are making headway in reducing inflation.”

“My economic plan is producing results, and the American people can see that we are in a strong position to face global economic issues.” It will take time to return inflation to normal levels, and there may be setbacks along the road, but we will persevere and assist families with their living expenses,’ he said in a statement.

Biden also noted that the data indicated food costs were not growing as rapidly as they had in the past, a much-needed reprieve as we approach the holiday season.

While food prices climbed by 0.6%, the rate was significantly slower than in previous months. The price of food consumed at home increased by 0.4%, representing the smallest increase since December 2021. There were price hikes for meats, poultry, fish, eggs, grains, and baked goods. But fruits and veggies cost less.

And he cautioned Republicans, who are about to win control of the House of Representatives, that he would resist any move to reverse his goals or increase inflation.

Republicans are already considering taking back sections of the Inflation Reduction Act, including its new, higher corporate taxes and a number of its environment policies.

However, they would also require control of the Senate. Biden retains his presidential veto pen in order to halt any congressional action.

President Joe Biden Biden stated that the October statistic demonstrates that “we are making progress in reducing inflation.”

Last month, annual inflation in the United States remained stubbornly high at 7.7 percent, but declined for the fourth consecutive month.

According to VoteCast, a large survey of more than 94,000 voters nationally conducted for The Associated Press by NORC at the University of Chicago, nearly half of voters identified inflation as their top concern in the midterm elections that concluded Tuesday.

About eight in ten believed the economy was in poor shape, and a narrow majority blamed President Joe Biden’s policies for the escalation of inflation. A little less than half of respondents stated that external forces, such as Russia’s invasion of Ukraine, were to blame.

Wall Street reacted warmly, with the Dow Jones Industrial Average increasing by 750 points, or 2.31 percent, at the opening and reaching 33,264.

“Today’s CPI data for October is an encouraging indication for consumers who have had to manage the ongoing strain of inflation on household budgets over the past few months,” said Scott Brave, head of economic analytics at decision intelligence firm Morning Consult.

Brave said that the most recent report, coupled with other recent data, ‘indicates that households had a welcome respite from the sting of inflation last month.’

And rates for energy services decreased due to a 4.6% monthly dip in the cost of natural gas utilities, as natural gas prices subsided from their recent peaks.

However, many analysts warn that by continuing to severely limit lending, the Fed would certainly precipitate a recession within the next year.

The Federal Reserve has raised its benchmark interest rate six times this year in substantial increments, boosting the possibility that unreasonably high borrowing rates – for mortgages, auto purchases, and other high-cost necessities – would push the world’s largest economy into a recession.

During Tuesday’s midterm elections for the U.S. House of Representatives, many voters prioritized inflation.

Their economic concerns contributed to the loss of Democratic seats in the House of Representatives, but Republicans did not achieve the massive political gains that many had anticipated.

Even before Thursday’s data, some gauges of inflation had already begun to decline, and this trend could continue in the coming months.

The majority of wage indicators, for instance, indicate that the robust salary growth of the preceding 18 months have leveled out and began to decline.

Despite the fact that worker pay is not the primary cause of rising prices, it can exacerbate inflationary pressures if companies compensate for greater labor expenses by charging customers more.

Chairman of the Federal Reserve Jerome Powell is pictured above.

Numerous experts warn that by continuing to aggressively tighten lending, the Federal Reserve is likely to trigger a recession within the next year.

Except for automakers, who are still having trouble acquiring the necessary computer chips, supply chain interruptions have largely subsided.

Transport expenses have returned to pre-pandemic levels. The cargo ship backlog off the coasts of Los Angeles and Long Beach has been eliminated.

And as drops in new rentals that have arisen in real-time measures from sources like ApartmentList and Zillow are reflected in the government’s upcoming measures, this element should also cut inflation.

Even though many are concerned that the economy may enter a recession next year, the employment market has remained robust.

Employers have added an average of 407,000 jobs per month, and the unemployment rate is near a half-century low of 3.7%. The number of job opportunities remains at historically high levels.

However, the Fed’s rate hikes have severely harmed the American home market.

Since the days of the economic boom, the US housing market has cooled dramatically as mortgage rates have increased and property prices have decreased. The October home selling prices are not yet available, as mortgage rates soared to over 7% in recent weeks.

In the past year, the average rate on a 30-year fixed mortgage has more than doubled, surpassing 7 percent before decreasing somewhat last week. As a result, investment in housing plummeted by 26% annually during the quarter of July-September.

Increased mortgage interest rates have reduced sales. Compared to a year ago, home prices are decelerating dramatically and have begun to decline on a monthly basis. Additionally, the cost of a new apartment lease is decreasing.

However, due of how the government calculates housing expenses, changes in housing costs are reflected in the consumer price index many months later.

The government determines the price of all rents, including the majority of rents under existing leases. However, asking rents for new leases are gradually falling.