Skip to content
Go Home «» News «» Breaking News «» Biden and Harris’ photo-op with the Warriors takes an unpleasant turn: “I’m not doing that.” 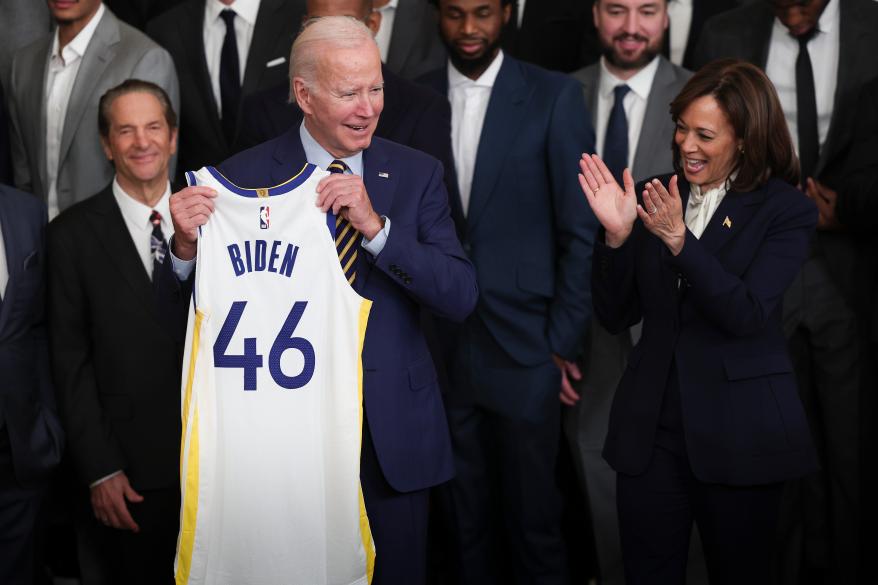 During the Golden State Warriors’ Tuesday visit to the White House, President Biden, Vice President Harris, and the team were embroiled in a cringe-worthy photo-taking incident.

Biden and Harris appeared to be conversing over the photograph’s composition. The president then knelt on one knee, and coach Steve Kerr is shown shouting “No” and waving him away with his right hand. The president grinned, as the vice president on one knee laughed.

Harris answered with a smirk, “I’m not doing that.”

As the photographs were shot, Harris went between Warriors superstar Steph Curry and veteran Andre Iguodala.

After rejecting President Trump in 2017 and 2018, the Warriors celebrated their latest NBA triumph.

Joe Biden receives a response from the Golden State Warriors after he kneels in front of Kamala Harris for a team photograph.

Harris indicates “I’m not doing that” while standing still in the photo.

Kamala Harris refused to kneel in front of a complete NBA team.

Kamala exclaims, “I will not do that!”

Joe Biden then kneels in front of the Golden State Warriors.

Warriors are willing to meet with the worst administration in our lifetime, but they will not visit while Trump is president…

“On behalf of the Warriors, I’d like to thank President Biden and Vice President Harris for inviting us to the White House today to celebrate last year’s championship,” Kerr said at a White House news briefing. “It is a wonderful reminder of how fortunate we are to be Americans and to live in a country where we can pursue our dreams and enjoy the fruits of our labor as well as the celebration of those around us.”

Kerr stated that he participated in a roundtable meeting at the White House regarding gun violence and gun safety, a subject on which he has previously been outspoken.

“Over the past hour or so, we’ve learned a great deal about what this administration is doing to make our country safer,” Kerr continued. Something extremely near and dear to my heart. And it’s amazing to learn much more than I previously did.

Curry, who was awarded NBA Finals Most Valuable Player for the first time, commended the administration for securing the return of WNBA star Brittney Griner to the United States following her arrest at a Moscow airport in February.

Curry stated on Tuesday that it was a terrific opportunity for the basketball community to appreciate President Biden and his staff for their efforts in bringing Brittney Griner home.

“It means a great deal to know that she is safe and sound at home with her family. And all the behind-the-scenes effort that went into making that a reality.”

»Biden and Harris’ photo-op with the Warriors takes an unpleasant turn: “I’m not doing that.”«