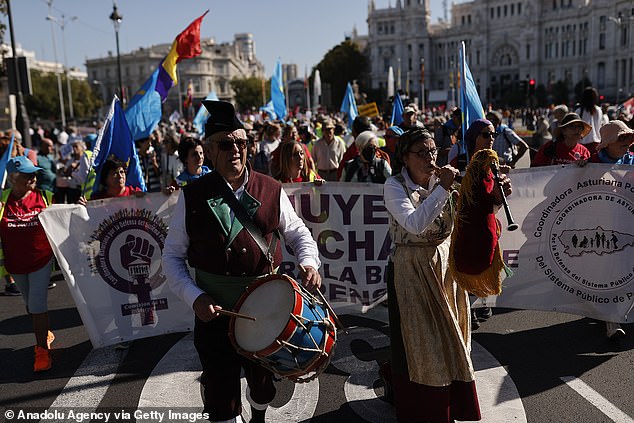 Following political instability, the Foreign Office has issued a travel advisory for Spain as demonstrations over the nation’s skyrocketing cost of living issues erupt.

In rallies held around Spain, thousands of citizens have been demanding that salaries and pensions be raised in step with inflation.

Last week, there was a sizable protest in Madrid, and there have been pro-independence marches in Barcelona where demonstrators have stopped the airport and other thoroughfares.

The Foreign Office has amended its travel advice, stating that demonstrations, political rallies, or marches may occur in Spain with little or no notice, especially in urban areas. Police and local authorities’ instructions should be heeded.

Even while protests are generally peaceful, there is a chance that there will be a few rare instances of disorder or violence.

“If you’re in or near places where protests are taking place, keep an eye out and leave right away if there are any indications of unrest.”

Many Spanish families have recently experienced financial difficulties due to high inflation and some of the lowest incomes in western Europe.

As families prepare for a harsh winter, protests against the nation’s rising prices have been echoed by comparable events in France, Belgium, and Germany.

Even while the government maintains that the economy is robust enough to escape a recession, Spain’s economy slowed down in the previous quarter amid concerns that it may enter one next year.

‘We’ve witnessed a big spike in inflation over the previous nine months and nothing has been done,’ said Antonio Pérez, general secretary of the Federation of Independent Workers union, on Spanish television.

The situation must be changed since people’s discretionary income is decreasing and it will becoming harder and harder for them to make ends meet and pay their rent.

Last Saturday, organized protests were held in the cities of Valencia, Malaga, and Madrid.

It follows the relaxation of all Covid regulations in Spain earlier this month, which allowed visitors from the UK to travel without being subject to any limitations.

You should heed the local authorities’ recommendations on how to effectively safeguard yourself and others, including any steps they take to contain the infection, the warning continues.