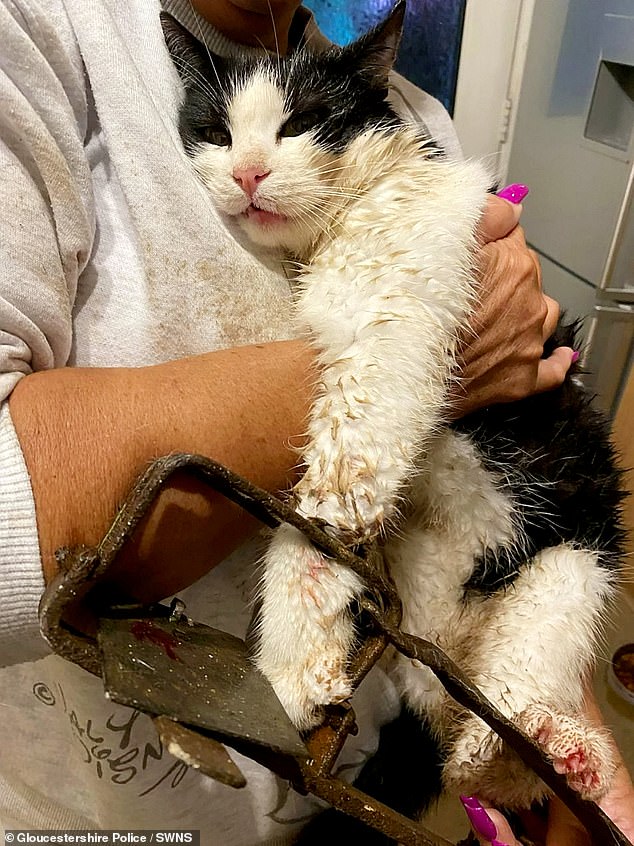 A pet cat sustained “horrific” injuries after her paw became caught in an illegal animal trap, as depicted in horrifying photographs.

Wednesday, October 26, Belle was strolling near her home in the Forest of Dean, Gloucestershire, when she was trapped in the jaws of a prohibited device, according to police.

Unbelievably, the injured cat crawled back to its astonished owner, but veterinarians who are currently treating her believe they may have to amputate her leg.

The vicious spring-operated apparatus known as a Gin Trap was used to capture stoats and foxes until 1958, when it was formally outlawed.

She stated, “To see a pet in this condition is horrifying; no one should have to go through this because of a negligent person who illegally placed a trap, for whatever reason.”

The usage of gin traps was forbidden in 1958, and the Pests Act of 1954 regulates the use of traps.

PC McDay stated, ‘This type of trap is used to capture an animal by its leg or head utilizing spring-operated jaws with fangs, and the resulting damage can be horrifying.

In addition to creating a Gin Trap, which is a major offense, Belle’s anguish has resulted in the commission of more crimes.

PC McDay continued, “I would like pet owners in the Lydney area to be watchful over this occurrence, and I encourage anyone with information to contact us.”

»Belle, a domestic cat, has her foot caught in an illegal “gin trap” in heartbreaking images«