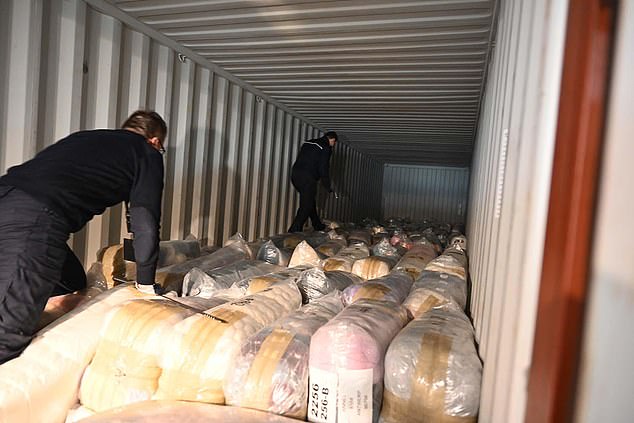 Belgium has confiscated so much cocaine from smugglers operating via the port of Antwerp that it needs more incinerator space to destroy it, according to officials on Monday.

More than 100 tonnes of cocaine are expected to be gathered by the end of the year, earning the nickname “cocaine-berg” for the vast police cache.

Authorities are afraid that drug storage depots could become targets for robberies by gangs attempting to reclaim their valuable cargoes.

Francis Adyns, a spokesperson for the Belgian customs office, told AFP that there is a problem with incineration capacity and that a structural solution is on the way, corroborating claims in the local press.

The regional administration of Flanders may announce a strategy as early as Tuesday, according to officials.

Antwerp, Europe’s principal port of entry for the illegal trade, is the source of Belgium’s newest problem: the huge amounts of cocaine from Latin America that are intercepted there.

Supposed gang members have reportedly been spotted using drones to scout customs depots containing millions of euros’ worth of seized cocaine, as reported by the local press.

Adyns stated that environmental criteria must be satisfied in order to incinerate cocaine. Authorities are working fast to destroy the seizures.

Antwerp, a city spanning 75 square kilometers, has become the epicenter of Europe’s cocaine trade, in part because it has long served as a port of entry for South American goods.

Due to its existing maritime connections, Colombian drug cartels increasingly decided to exploit the country as a worldwide center to import cocaine bound for lucrative markets in Europe, Russia, and the Middle East.

The increase in supply is also satisfying the increased demand for cocaine in Europe, where it is viewed as more socially acceptable.

The refined operations of gangsters able to bribe workers and officials to assist in the movement of cocaine out of Antwerp have made the city alluring to drug cartels.

Its proximity to the Netherlands, where much of the imported cocaine is chopped and packaged before being shipped on, is also a contributing factor.

Earlier this year, an Albanian criminal was gunned down in front of his home in Antwerp after a deadly battle for control of the lucrative cocaine trade in the city.

Beldar Muca was shot six times as he returned to his apartment just yards from a police station, with authorities stating that the incident bore all the signs of a contract killing.