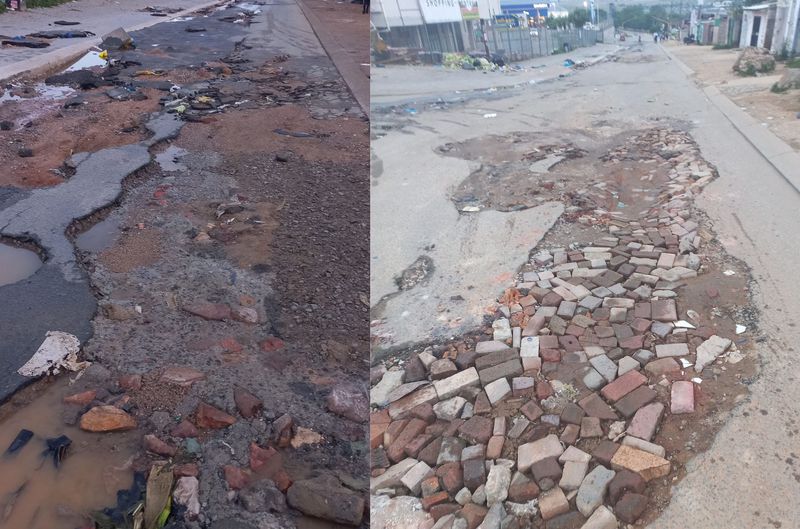 Instead of blocking roads with burning tires and garbage, the citizens of Cosmo City have decided to focus their energy on repairing potholes.

Recent rains and floods have exacerbated the deterioration of the roads in Cosmo City, north of Johannesburg, making it difficult for cars to navigate them.

Drivers have resorted to driving on sidewalks to avoid hitting potholes or falling into trenches on the dilapidated roadways, putting pedestrians in danger.

Instead than waiting for the City of Johannesburg to take action (which is long overdue), residents have begun filling potholes and trenches with rubbish to make driving safer.

This service is provided by unemployed kids who spend the majority of the day filling potholes in exchange for gratuities from motorists.

“Old bricks and sand are used to patch the potholes. These roads have been in this condition for months.”

KB told The South African that pothole repair is their primary source of income.

On a good day, we make approximately R200. We divide the funds and purchase anything we require, be it food or clothing,” he explained.

In addition, he noted that this type of job is thriving in Cosmo City, where multiple roadways are plagued by potholes.

“Rather than remaining at home, I’d rather urge the lads to find a location where they may patch potholes and earn cash from appreciative cars. “Drivers appreciate what we do,” he urged.

When we spoke with a few of the worried locals, a lot of them cited the following causes for the deterioration of the roads:

The residents of Cosmo City believe that the City of Johannesburg has forgotten about them. The roads situation is at the forefront of all community gatherings, yet no one seems to be listening.

High traffic levels have contributed to the deterioration of the roadways.

»Before & After: Residents of Cosmo City address potholes«