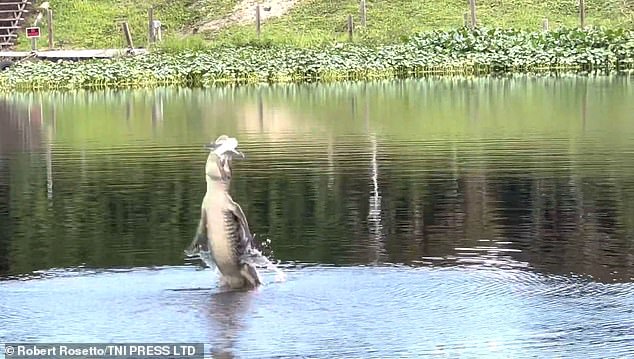 After grabbing a drone belonging to a nearby real estate agent out of the air, a beady-eyed alligator in Florida may have a taste for flying technology.

The alligator clearly showed interest in the drone after seeing it hovering just above the muddy water.

The scaly creature is seen on video jumping out of the water and devouring a new drone belonging to photographer Robert Rosetto.

He decided to use the camera to get a closer look after spotting the alligator in the water. But when the deadly reptile grabbed it out of the air, disaster struck.

He revealed last night: “I use a brand-new drone for my real estate listings.”

The alligator showed serious interest in it by approaching it directly and then following it as I tried to take pictures of my girlfriend’s family’s new boat.

He continued, “I then thought I’d get some good close-up video and pictures of the alligator.”

Never imagined it would actually launch itself out of the water that far and grab the drone.

“I’ve been a resident of Florida for almost 30 years and frequently encounter alligators, but I’ve never seen anything like that.”

Robert was left speechless, and his family started laughing right away.