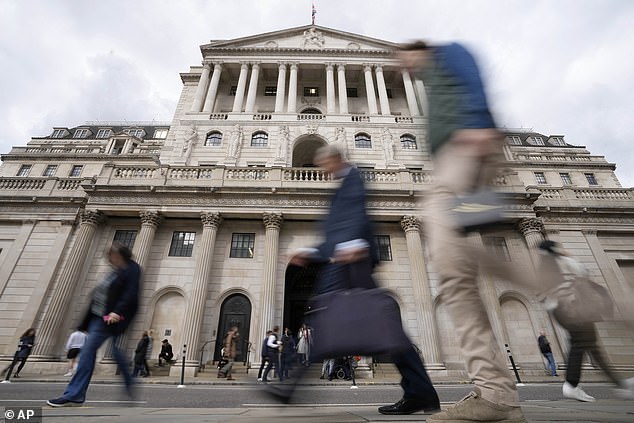 It is anticipated that interest rates will be raised to 3% today, a 0.75% increase and the largest single increase in thirty years.

On Thursday, the Bank of England is poised to announce the largest interest rate increase in decades in an effort to rein in the inflation that is ravaging British consumers.

Karen Ward, a member of Chancellor Jeremy Hunt’s economic advisory board, projected this morning that interest rates will hit 5% in the coming months, which is further bad news for hard-pressed Britons.

More than 1.5 million households with tracker or standard variable mortgages will immediately feel the impact of the base rate increase. If the Bank rises rates to 3%, borrowers with a £200,000 typical variable mortgage might see their annual payments increase by more than £1,000.

In a crucial meeting, the nine members of the Monetary Policy Committee, including Governor Andrew Bailey, will reach a decision that might increase the monthly payments of millions of mortgage holders.

The resulting decision is anticipated to raise the Bank’s basic interest rate from the current 2.25 percent to 3 percent, the highest level since 2008. Against this rate, mortgages are decided.

If the Bank rises interest rates by 0.75 percentage points, as predicted, it will be the largest single hike since Black Wednesday. On 16 September 1992, interest rates increased twice: from 10% to 12% in the morning, and then to 15% in the afternoon.

Today also marks the seventh consecutive day that the Bank has increased interest rates. Before one year, the rate was 0.1%.

Earlier this month, the markets had expected that the interest rate increase may be as high as one percentage point, but after the change in Chancellor and Prime Minister and the Bank of England’s bond purchases, mood has moderated.

Andrew Bailey, governor of the Bank of England, stated last month that it was possible that the increase in interest rates might be greater than the 0.5% increase to 2.25% witnessed at the previous meeting.

On October 15, he stated, “Given the current state of affairs, my best opinion is that inflationary pressures will necessitate a bigger response than we may have anticipated in August.”

Deutsche Bank analysts anticipate that the Bank of England will choose a 0.75 percentage point hike with a split vote.

The company’s experts anticipate that the Bank of England’s most recent estimates, which will also be released on Thursday, would indicate that “the economic outlook has worsened further.”

They stated, “Subject to market pricing, the British economy would likely enter a deeper and longer recession.”

The Bank will also confirm its inflation projections for the longer term, which are expected to indicate that next year’s cost of living will be significantly higher than the 2% objective set by the central bank.

‘The upcoming estimates, which are crucially dependent on market interest rate expectations, are likely to be gloomy, indicating both a deep recession and below-target inflation in the medium future,’ he said.

This should be interpreted as a not-so-subtle indication that market pricing is incompatible with the government’s inflation target.