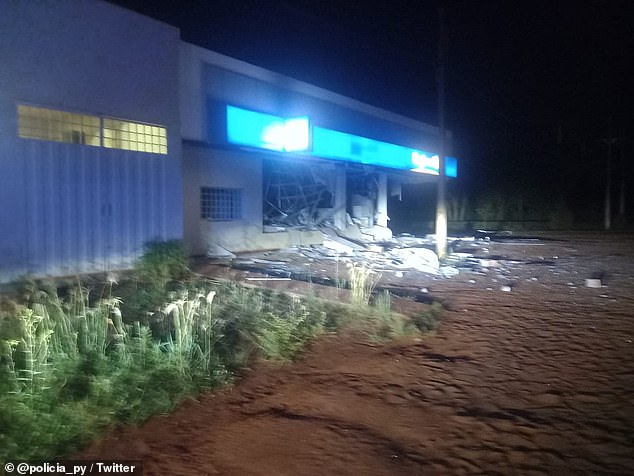 A group of bandits blew up a bank in the southern Paraguayan region of Itapa, as captured on shocking video.

The explosion shattered ATMs and dispersed currency on the ground.

Jorge Piánez, chief of the Paraguayan National Police in Itapa, informed ABC that eight persons arrived in two vehicles and surrounded a precinct in Kressburgo, a town in Carlos Antonio López’s region.

The highly armed group did not fire at the police, but their presence prevented officers from reacting to the bombing of a Banco Regional branch a mile away on Friday at approximately 1am local time.

Friday morning, a group attacked a bank in Itapa, Paraguay, and fled with an undetermined quantity of cash. At least ten suspects, according to the police, were involved in the bombing of the Banco Regional branch, while eight men armed with guns encircled a police station a mile away in order to prevent a reaction. As of Friday afternoon no arrests have been made.

A resident of the town of Kressburgo in southern Paraguay captured the sounds of gunfire unleashed by a gang before they blew up a bank on Friday. Police have not yet disclosed the amount of money stolen.

The accused strewn the road near the bank with nails that may have punctured the tires of police cars in the case of a chase.

At least ten criminals are suspected to have detonated the explosives at the bank before fleeing with an undisclosed sum of money, according to National Police deputy commander Baldomero Bentez, speaking to Radio Monumental 1090 AM.

“The entrance to the vault has been damaged,” Bentez said, adding that they were still attempting to acquire access to surveillance camera footage.

The boom shook the home of a woman, who at first believed that Christmas or a birthday was being celebrated with fireworks.

She stated, “We were terrified and did not know what was occurring.”

During business hours, the bank employs a security guard on-site, according to the woman.

Friday, according to police, the suspects blew up the bank vault door and fled with an undetermined sum of cash.

The Paraguayan National Police is investigating whether the culprits who attacked a bank in Kressburgo on Friday are the same as those who bombed a bank in Pirapó on September 14.

Residents informed the police that the gang had positioned armed members at many strategic locations in Kressburgo.

Additionally, the criminals set a car ablaze on a road 18 kilometers from the bank. And according to Piánez, the assailants placed huge nails along the road to prevent the police from pursuing them.

He told La Nación that forensic investigators were in the preliminary phases of assessing whether Friday morning’s explosion was related to the bombing of a bank in Pirapó, Itapa, on September 14.

As of Friday afternoon, no arrests had been reported.