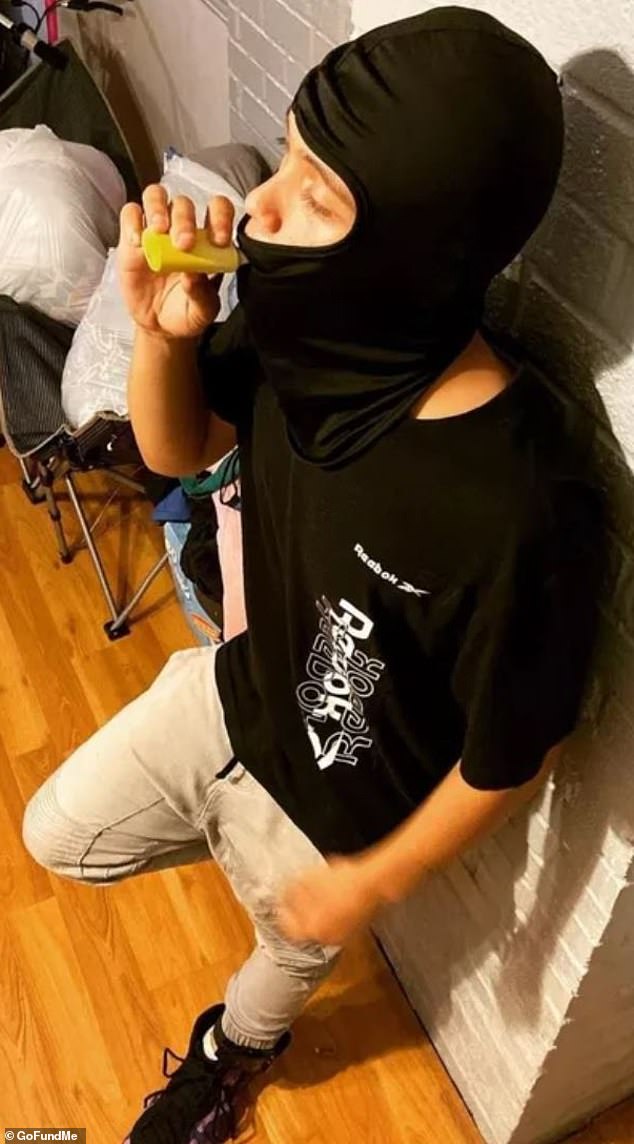 A father in Maryland criticizes prosecutors in Baltimore, whom he thinks are responsible for an increase in juvenile criminality.

Santiago Garcia-Diaz states that his 15-year-old son Bryce had been detained numerous times in Baltimore and Washington, D.C. for carjackings and thefts, and that he hoped the law would help him teach Bryce a lesson.

He claims that not only have they not assisted in bringing his son under control, but their inaction has made the matter worse.

“He began breaking into cars to steal smokes and chains, and now he’s stealing cars and fleeing the cops,” the concerned father told a Baltimore source.

This is my greatest fear: that he will not be alive. It is steadily deteriorating.’ Santiago Garcia-Diaz claims that his 15-year-old son Bryce routinely uses marijuana and steals automobiles.

Concerned about the inaction of law enforcement about his son’s out-of-control behavior, the anxious parent spoke with a Baltimore-based news station to express his displeasure.

The father claims that his son is out of control and that the local prosecutors are unable to help because his son has been frequently let off the hook.

Santiago provided Fox45 in Maryland with his son’s arrest record from earlier this year.

The paperwork he provided to the media site revealed that 15-year-old Bryce had been detained together with a friend for stealing two vehicles and engaging in a high-speed pursuit.

Bryce and his companion stole a Lexus and a Honda CR-V before leading police officers through crowded streets.

During the event, according to Santiago, his son nearly murdered two police officers who were attempting to stop him.

They attempted to barricade in my son. Someone tried to stop him, but he stepped on the throttle and drove straight past them, knocking them out of their shoes,’ he added.

Santiago alleges that not only is law enforcement not assisting him by disciplining his son, but they have also threatened to prosecute him with abandonment and negligence for failing to pick up his child.

After the high-speed police chase, Santiago claimed that police gave him three hours to reach the station or he would be detained.

The father states that his son has had 18 charges dropped, leaving only one misdemeanor conspiracy charge, which resulted in probation that he has regularly violated.

He stated, “I don’t know what to do anymore.” I’ve researched boot camps but cannot afford them.

Santiago claims he was threatened as he attempted to instruct his son.

He is a father who feels that his son must be punished in order to be saved.

“I want my youngster to receive assistance. I mean, if jail is the only option, then jail it is. What my son needs is mental assistance.

Santiago claims that reparation fines for his son’s misdeeds are taking a tremendous financial toll on his family. In reaction, he has created a GoFundMe campaign.

The Garcia-Diaz family resides in Baltimore, which alone recorded more than 600 carjackings in 2022.

The father claims he has petitions signed by local judges to have Bryce committed for a psychological assessment.

Santiago argues that the petitions were fruitless since hospitals refused to take him without a record.

Bryce was supposedly sentenced to six months of probation following a single incident.

His father claims that he violated every condition of his probation on the first day.

“Nothing ever occurred,” he stated.

Bryce, age 15, has had numerous run-ins with the cops in both Baltimore, depicted above, and Washington, D.C.

Bryce, one of three children, has been diagnosed with Post-Traumatic Stress Disorder, Attention Deficit Hyper Disorder, and Oppositional Defiant Disorder, according to a GoFundMe page created by Bryce’s father in Baltimore.

The father stated, “I have three wonderful children that I would lay down and die for, but I have one son for whom I have done everything in my ability to get him to help himself.”

Approximately two and a half years ago, he recalls, the incidences began to increase. Prior to it, Bryce had only minor concerns with’stealing’ and ‘escaping’

Now, he has been arrested more than five times, has carjacked others, and is always consuming marijuana and taking drugs. Santiago said it has become a problem for the entire family.

He argues that cases like Bryce’s are responsible for the rise in youth crime.

He stated, “This isn’t even about my son; it’s about the children of Baltimore City and all juvenile offenders.”

Santiago reports that 18 of the 19 accusations against Bryce have been dismissed, with the remaining charge being the one that resulted in probation.

In 2021, more than 330 homicides will be committed in Baltimore.

Santiago asserts that Bryce drove a stolen vehicle through a house and ran over a police officer.

Charges of assault and battery against the arresting officer were also dismissed. Bryce was charged with one count of conspiracy, a misdemeanor.

The father states that he has attempted to contact the mayor and the governor and that they assisted him by placing a GPS tracking device on him, but he has already removed it.

Santiago claims he has run out of ideas and has no idea what to do at this point.

In recent years, Baltimore has been a hotspot for crime.

As shootings, carjackings, and thefts appear to be on the rise, the streets of Baltimore no longer appear safe to many locals.

Despite a robust police presence across the city, the crime rate in the Maryland city remains high.

“I’m really concerned that my son will not reach the age of 18,” he added.

Additionally, he claims he has been summons to court for damage caused by Bryce during one of his “outings.”

Santiago has been urged to seek legal advice, as he feels the owner of the house Bryce crashed into during one episode and the owner of the stolen vehicle he was driving will want to file a lawsuit against him.

This GoFundMe will assist with covering legal bills and any restitution he may be required to pay.

Please offer a special prayer for my son, as well as a prayer for me, wrote Santiago. Our entire family would be devastated if he were to disappear from the world.

State’s Attorney Marilyn Mosby of Baltimore stated in 2021 that “the age of “tough on crime” is over.”

Marilyn Mosby, the state’s attorney for Baltimore, stated in 2021 that she would make permanent a policy implemented during the pandemic that no longer prosecutes drug possession, prostitution, and nonviolent offenses.

In an interview with the Washington Post, she claimed, “The era of “tough on crime” is past” and pledged to instead divert convicts into programs to fight addiction and mental health concerns.

According to the City of Baltimore, more than 25,000 offenses have been reported this year alone.

In addition, there have been 278 homicides in the city as of October 30.