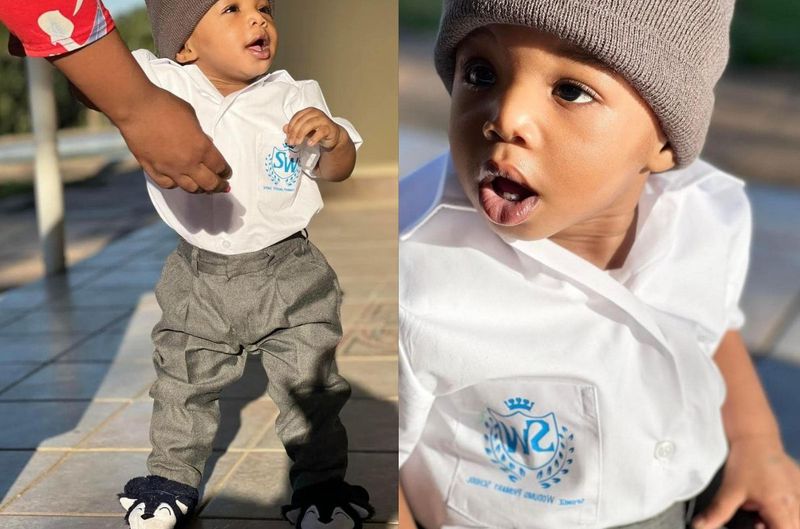 On January 18th, Babes Wodumo and Mampintsha’s son Sponge returned to school. The Wololo hitmaker posted photos of her adorable child online and zoomed in on the school’s emblem, which shocked netizens.

In the teaser for their three-part reality television series Uthando Lodumo, Babes Wodumo and Mampintsha revealed that the Umngan’Wam hitmaker was pregnant with the couple’s first child. The show launched on Showmax on June 30, 2021, according to News24.

The 28-year-old widow and her late husband announced Sponge’s birth on Instagram on June 16. The Gqom queen introduced the new member of her family with a photograph taken in the hospital where Sponge was born.

Babes Wodumo wrote the following as a caption:

“Our lovely blessing has finally arrived,” she added.

Since the birth of Sponge, the singers have shared footage of their adorable child on social media, demonstrating that they adore being parents.

Fans and social media followers of Babes Wodumo and Mampintsha have also fell in love with Sponge and remarked on the posts about how lovely he was.

The child was dressed in grey pants and a white blouse with a blue emblem. At first glance, one might question why Sponge was not wearing school-appropriate footwear, but upon closer inspection of the subsequent images, it becomes clear.

Another image uploaded on Mampintsha’s Facebook account displayed the school badge that Sponge will be attending, which read:

When Facebook users saw photographs of Sponge in his school uniform, they laughed and praised Babes Wodumo’s inventiveness for designing the child’s uniform from scratch.

VIEW WHAT NETIZENS HAVE TO SAY ABOUT SPONGE’S UNIFORM
Lungani Ndlive asked:

“The youngster now attends his own school. Nice! 👍”

The Sponge High School I anticipate its arrival.”