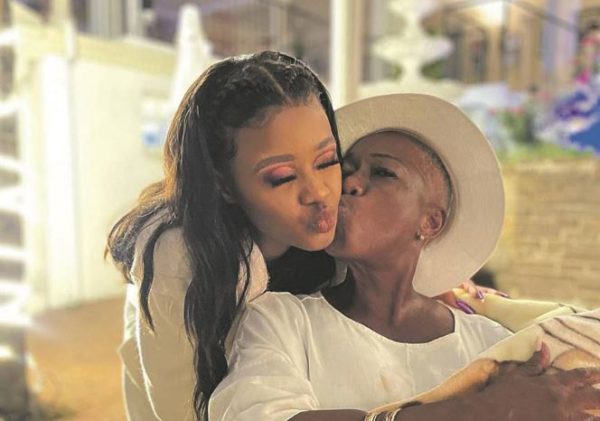 Zandile Maphumulo, the spokesperson for the Simelane and Maphumulo families, allegedly put Mampintsha’s mother in her place when she expected an invitation to her son’s burial.

According to Daily Sun, the family was perplexed as to why she was distancing herself and said that they would not be inviting her to the burial because it was not a celebration or wedding.

Zandile corroborated the reports that Mampintsha’s mother Zamanguni Gumede was excluded from her son’s funeral plans.

When Zamanguni eventually came to pay her respects, the spokesperson told her, “We expected you to come quickly following the announcement, or we were not going to invite you. If I may inquire, why did you not travel with journalists? Consider that you should have invited the media to see your presence here. However, I must warn you to refrain from speaking with the media, as we do not want any noise.

Zandile also confirmed to the publication that the burial is being organized by the two families: “A team has already been assembled, and we will not interfere.”

Zandile stated that they were unaware of Zamanguni’s desire to view her son’s body despite the rumors that she would not be permitted to do so.

She stated, “We do not know if she wishes to view Mpintsho’s body, and she has not made a formal request.”

NOT PERMITTED TO VIEW SON’S BODY

According to Ezivuthayo Emaputaland, Zamanguni traveled to Westville to view Mampintsha’s body so that she could accept that he had died away, but she was not permitted to do so.

According to the publication, Mampintsha’s sister and manager Nondumiso Simelane is in possession of the document stating who may and cannot see the ‘Ngeke Ngvume’ singer: “anyone wishes to see the body must ask her.”

“[Mampintsha’s sister Pinky apparently stated that the Maphumulo family discovered that they were not included in the burial plans,” the newspaper claimed.