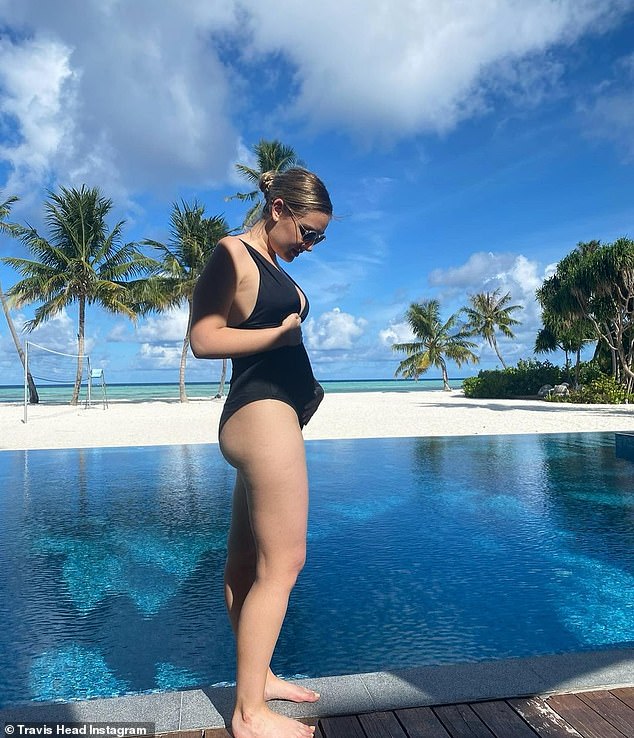 An Australian cricket star and his pregnant wife have revealed how they were caught in a ‘terrifying’ mid-air emergency while on a dream holiday overseas .

Travis Head and his pregnant partner Jess Davies were on their way home from the Maldives on a small plane when they suddenly were forced back to ground and almost crashed on landing.

Their Maldivian Airlines plane ‘slid off the tarmac into a field’ as it attempted to land on its second attempt on the night flight.

Confused passengers on board panicked ‘like in a movie’, Ms Davies said in social media posts.

The dramatic incident then led to a farcical aftermath that saw furious fellow passengers begin to get ‘aggressive’ with the Maldivian Airline staff.

The shocked couple said they were ‘locked’ in a room with other angry passengers without water or communications.

Ms Davies, who is six months pregnant, described the whole incident as ‘terrifying’.

She posted a photo on social media of their Maldivian plane stationery in a green field, surrounded by vehicles with spotlights blazing onto the aircraft.

On our way home from the Maldives our plane started descending 30 minutes into our one hour flight and we ended up landing on an island 45 minutes away from our destination,’ she posted.

Then some passengers got aggressive towards staff because they locked us in a room without water, phone signal or any communication for 45 minutes which only scared people more.’

‘We waited four hours for a rescue plane and provided with accommodation in Male but don’t worry we are totally fine.’

Previously Ms Davies had posted jaw-dropping photos of the couple’s luxurious surroundings in the idyllic Maldives in the Indian Ocean.

She had joked online that she planned to lose her passport so she couldn’t come home.