Skip to content
Home » News » News » Australia scrapping most of its virus rules but mutant variants BA.4, BA.5 and XE are circulating 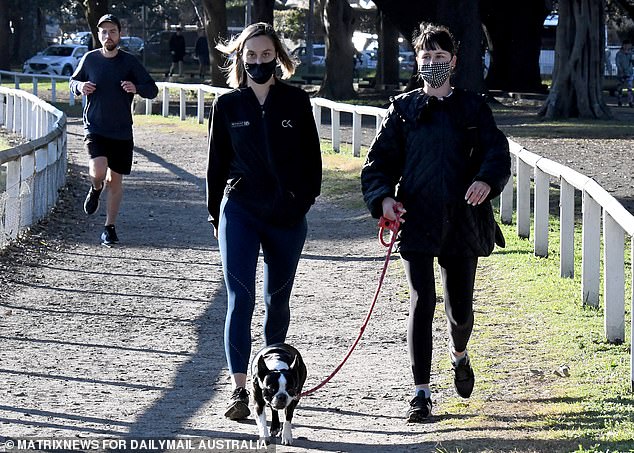 Covid restrictions are coming to an end for Australia’s two biggest states signalling that the pandemic crisis is now over, but virus experts warn life after coronavirus may never be the same again and that we can’t ‘drop our guard’.

The marker for New South Wales and Victoria to scrap isolation requirements for household contacts, starting Friday at 6pm, was the end of the Omicron BA.2 peak that caused major staff shortages across the country.

Victoria’s top doctor Dr Brett Sutton said although the worst is now behind us, new strains and subvariants will continue to plague Australia and the rest of the world.

There’s no question that as XEs and the BA.4 and 5s [subvariants] continue to emerge, they will drive cases up to a degree.

‘These strains are less likely to challenge our hospital system as we get more and more people vaccinated, but we shouldn’t drop our guard on all of those protections.’

But infectious diseases physician Professor Peter Collignon told Daily Mail Australia the days of lockdowns and harsh restrictions are over.

‘We don’t know what the effect of these new strains will be but if you look at the strains we have already had – Alpha, Delta and the like – all have been controlled by vaccines which have greatly decreased the level of deaths and serious disease,’ he said.

‘It’s possible that case numbers may shoot up as new strains come in, but I think we will be in a better position than we are now and certainly than we were one year ago.

‘I also think a return to any of the harsh lockdown restrictions is very unlikely. Unless of course we get a new strain that goes back to the mortality rate of the original strain. But I don’t think that will ever happen.’

He said vaccines and breakthroughs in anti-viral drugs along with a range of other new therapies indicate life can mostly return to a pre-pandemic normal.

But the virus expert dismisses Scott Morrison’s declaration on Tuesday: ‘The pandemic has passed.’

‘That’s not particularly accurate as the virus is still circulating,’ Prof Collignon said.

‘To put it in perspective, look at the Spanish flu of 1918. It continued to circulate every winter for 50 years until the 1970s, continuing to cause more deaths – but nothing like the first two years.

‘This virus will be similar. I think this virus is going to stay. It will circulate more in winter than in summer.

‘We will see different strains but the death rate and hospitalisation rate will be markedly lower than it was for the first two years.’

Since the widespread use of the Covid vaccines, case fatality rates have dropped from four per cent in 2020 to 0.09 per cent with more than 95 per cent of the population vaccinated and almost two thirds receiving a booster.

NSW and Victoria’s decision to ease isolation requirements for household contacts came amid calls from businesses leaders that workforces nationwide were under immense pressure.

The often unnecessary shortfall of workers was also creating a major drag on the broader economy.

‘It’s a real positive now that someone who is well and has tested negative can go to work.’

‘But we are still going to have to live with the virus for some time, it’s not going to go away and we can’t just let it rip or get complacent,’ he said.

But with the mandatory seven-day quarantine requirement now dropped, NSW Chief Health Officer Dr Kerry Chant said it may lead to an increase in cases.

‘It is important to acknowledge that we are expecting the levels of transmission in the community to still be maintained at high levels,’ she said.