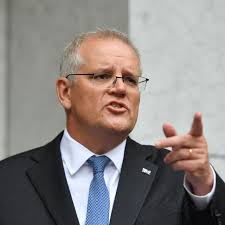 Australia’s prime minister accused China on Saturday of “form”, or a record, on interference in foreign politics, after his home minister said Beijing’s unveiling of a security deal with the nearby Solomon Islands was timed to influence an election.

With most polls showing Scott Morrison’s conservative coalition headed for a loss in the May 21 election, it has sought to highlight its national security credentials, such as a tough approach to China.

“We are very aware of the influence the Chinese government seeks to have in this country,” Morrison told reporters in Tasmania. “There is form on foreign interference in Australia.”

He was replying to a query about evidence for a radio statement by Home Affairs Minister Karen Andrews that the timing of China’s revelation of its recent Solomons deal was a form of foreign interference in Australia’s election.
China has said the pact was not targeted at any third party and urged Australia to “respect the sovereign and independent choices made by China and the Solomon.”

News of the security pact with the Pacific nation sparked concerns at the prospect of a Chinese military presence less than 2,000 km, 1,200 miles from Australian shores, casting the national security efforts of Morrison’s coalition in poor light.

After Australia’s opposition Labor party this week called the deal a national security failure by Canberra, Morrison’s government has toughened its remarks.

He cited a ban on foreign political donations and a register of foreign representatives, saying, “Any suggestion that the Chinese government doesn’t seek to interfere in Australia, well, we didn’t put that legislation in for no reason.”

In the Solomon Islands a day earlier, Prime Minister Manasseh Sogavare told parliament the country would not participate in any ‘militarisation in the Pacific,’ and had signed the China deal as a security pact with Australia was inadequate.