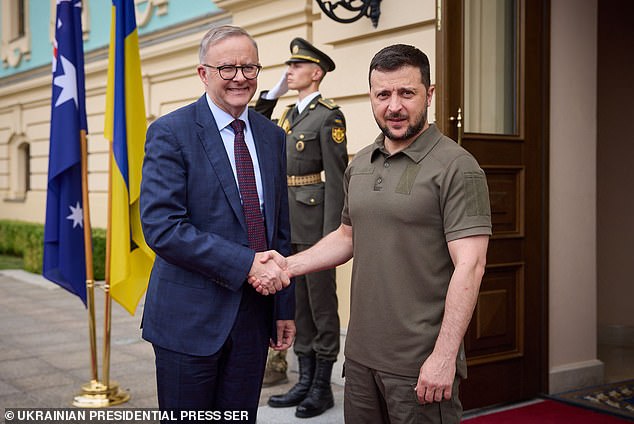 Australia might ‘adopt’ a part of Ukraine and promise to reconstruct its infrastructure after Russia destroys it.

Prior to a more comprehensive proposal being submitted last month, Vasyl Myroshnychenko, the ambassador of Ukraine to Australia, presented the resolution to Anthony Albanese’s administration.

The proposal calls for Australia and Denmark to collaborate in order to annex the southern Mykolaiv region.

Although it is still under Ukrainian control, Russian forces have been almost constantly pounding Mykolaiv.

Another choice would involve rebuilding Kherson, which is now held by Kremlin forces, with assistance from Australia and the Netherlands.

Both locations are next to the Black Sea.

At a meeting with Ukrainian President Volodymyr Zelenskyy in July in Kyiv, ambassadors from abroad and Ukraine first addressed the adoption proposal.

So far, ten countries have promised to collaborate with regions.

The Netherlands will assist in rebuilding Kherson, Turkey will take on Kharkiv, and Italy will focus on three regions: Odesa, Kyiv with the UK, and Zhytomyr with Estonia.

Chernihiv will be restored by Lativa, France, and Sweden.

‘The argument was that because it’s a maritime location and it’s on the Black Sea, a lot of support will be needed with rebuilding ports and shipbuilding, which is an area of competence for Australia,’ Myroshnychenko told Crikey.

‘There is severe fighting, but our goal is to expand reconstruction to Kherson after we retake it.’

The ambassador also expects that Ukrainian municipalities will be able to collaborate with international municipalities, local and state governments, private organizations, and individual contributors to generate funds to repair specific infrastructure.

Although no formal agreements have been made, he claimed that the Albanesian government has responded thus far in a “good” manner.

According to a representative for the Department of Foreign Affairs and Trade, the government will cooperate with allies to support Ukraine and will evaluate all formal requests for additional assistance: ‘The Australian government remains engaged with our Ukrainian counterparts and recognizes the tremendous obstacles connected with Ukraine’s reconstruction.’