Skip to content
Go Home «» News «» Breaking News «» At the border, a woman goes into labor as the armed National Guard confronts migrants 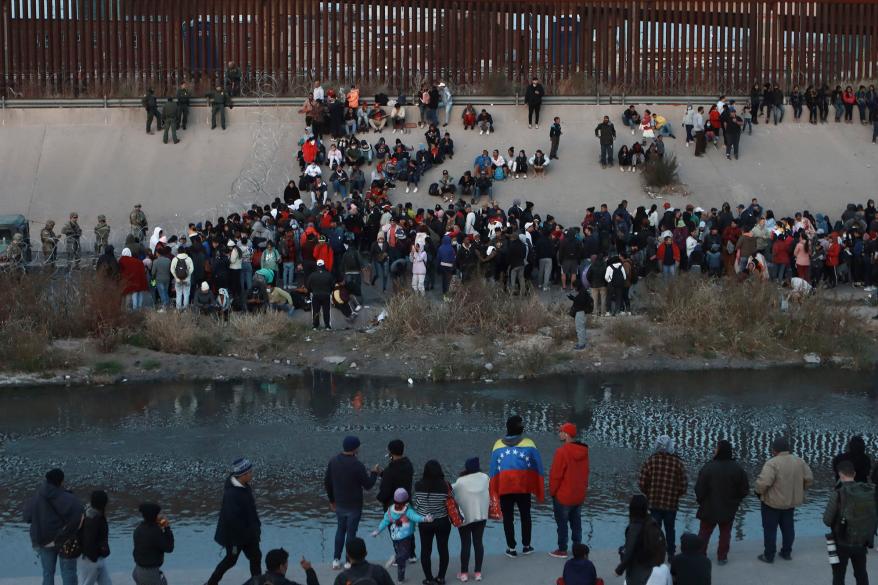 A pregnant lady went into labor at the Texas border as highly armed National Guard troops confronted tens of thousands of desperate migrants who were forced to wait longer than anticipated to enter the United States.

Huge masses, including young children, congregated on the banks of the Rio Grande in El Paso, Texas, where armored vehicles and interminable miles of barbed wire prevented them from crossing into the United States from Mexico.

They anticipated to be allowed in immediately upon the easing of Title 42 restrictions on Wednesday, until an unexpected, last-minute order was issued to keep it in place temporarily.

The unidentified pregnant migrant went into labor on the riverside, where Border Patrol agents raced to assist her, according to First Sergeant Suzanne Ringle, a spokesperson for the patrolling National Guardsmen. What happened to the woman and her infant was not immediately apparent.

El Paso issued a state of emergency over the weekend, warning that an estimated 20,000 migrants were intending to enter the United States via Ciudad Juárez, where shelters are overcrowded and food banks are close to running out of supplies.

Towards the end of Tuesday night, some migrants were permitted to enter via a gate, sending hundreds of people rushing along the Rio Grande’s concrete banks and leaving behind smoking campfires.

With military vehicles along the river and a loudspeaker announcing in Spanish that it is forbidden to cross, soldiers in camouflage uniforms and helmets and equipped with guns stood and observed the massive gatherings.

Similar images occurred in California, when 30-foot-tall, tiered, razor-topped barricades along the border in San Diego prevented an estimated 5,000 migrants from crossing from Tijuana.

Title 42 was a public health decree intended to limit the spread of COVID-19; it was used to expel asylum-seekers from the country 2.5 million times, or close to half of the record 4 million encounters at the Mexican border.

The White House stated that there was no longer a reason to “extend indefinitely a public-health precaution,” while recognizing that the termination of the limitations will likely result in “disruption and a temporary spike in illegal border crossings.”

It was scheduled to expire on Wednesday, but in a last-minute decision on Monday, the Supreme Court permitted it to remain in effect temporarily pending the outcome of a court challenge filed by Republican state attorneys general trying to extend the restrictions.

The administration of President Joe Biden requested that the asylum limits be lifted, but not until until December 27, after the Christmas.

Some of the tens of thousands of immigrants who went to border towns alleged that they had been deceived.

As he and his brother waited to bridge the Rio Grande, Venezuelan Vladimir Castellanos remarked, “I consider it as a joke, to give us hope and then, like a child, mislead us and tell us that they are going to delay it.”

Alexis Farfan, a 26-year-old Venezuelan, claimed he was awaiting his return after being ejected from the United States earlier this month.

“I cannot surrender so simply… He stated, “I have faith in God that I shall reach the other side

»At the border, a woman goes into labor as the armed National Guard confronts migrants«