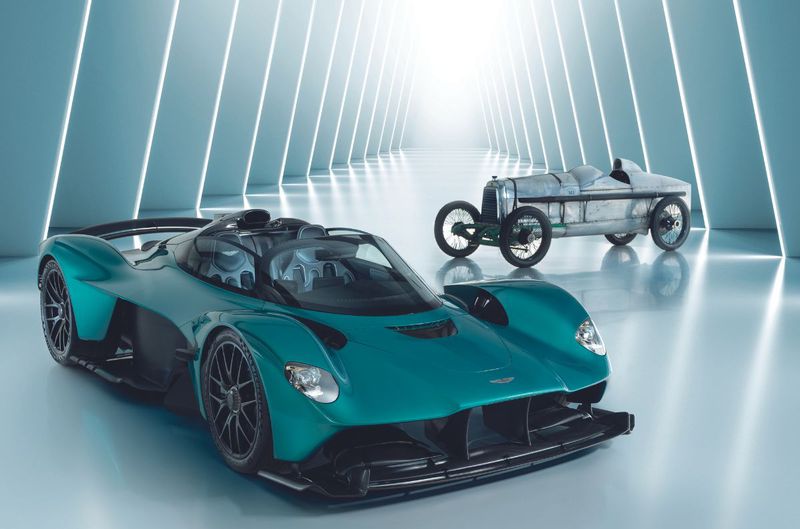 January 12, 2023, Gaydon: A year-long celebration of Aston Martin’s 110th anniversary will pay tribute to the past, present, and future of the legendary British company.

Born on the track and inspired by its founders’ passion for racing, Aston Martin has risen from a small workshop in London’s Henniker Mews to become one of the world’s most renowned automotive brands, synonymous with innovative design, luxurious craftsmanship, thrilling performance, and rare exclusivity.

In images released to commemorate the occasion, Aston Martin has brought together two of its most iconic and innovative models from its 110-year history, showing the brand’s dedication to pushing the limits of performance and bringing Grand Prix racing technology to road vehicles.

The Razor Blade set multiple class records at Brooklands in 1923, a year after Aston Martin made its Grand Prix debut with TT1 – the “Green Pea”-nicknamed vehicle. Aston Martin continues to create its exhilarating high-performance cars a century later, bringing Formula OneTM technology to the road with its era-defining Aston Martin Valkyrie.

The historic 110th anniversary of the brand will be commemorated with the release of a new, highly restricted, special Aston Martin vehicle later this year. As part of a global marketing campaign themed ‘Intensity: 110 Years in the Making,’ the milestone will also take center stage at this year’s British Grand Prix at Silverstone, Goodwood Festival of Speed, Pebble Beach Concours d’Elegance, and other major events across Aston Martin’s main territories.

Aston Martin is preparing to release the first of its highly anticipated new generation of sports cars in 2023, which will further strengthen Aston Martin’s commitment to ultra-luxury, high-performance, and driving intensity.

“In 1913, Lionel Martin and Robert Bamford joined together with a shared aim of racing automobiles and pushing the boundaries of automotive innovation utilizing racetrack insights.

“110 years and somewhat more than 110 thousand automobiles later, this spirit endures. Our 110th year promises to be just as exciting as our first, as we turn a new page in Aston Martin’s history with the introduction of our next generation of sports vehicles and the unveiling of an amazing special model later this year to commemorate this historic occasion.”

In 2023, Aston Martin will celebrate a number of significant anniversaries, including the 110th anniversary, 75 years of the DB bloodline, 60 years of the legendary DB5 model, and 20 years of its Gaydon headquarters, a centre of excellence for the design and engineering of world-class sports cars.

»Aston Martin’s 110th anniversary is celebrated throughout the year«