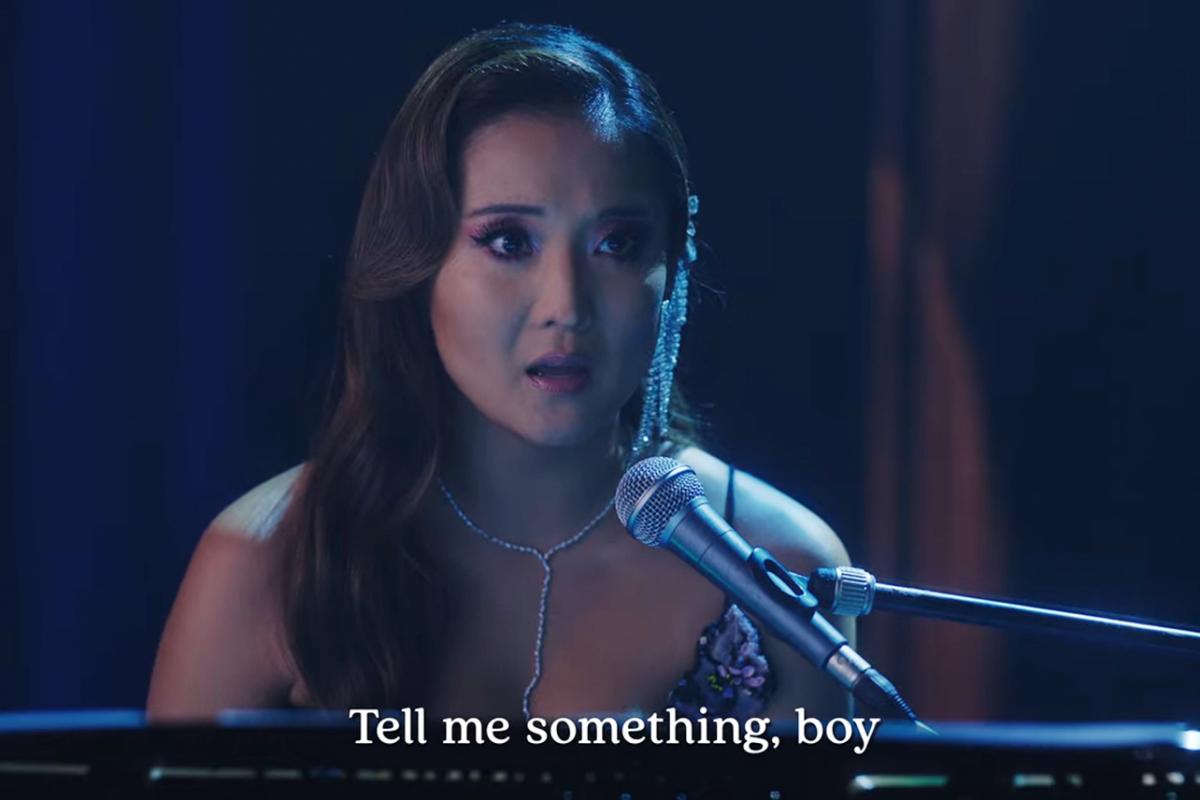 So many sequences in Emily in Paris Season 3 are absurd, but Ashley Park’s rendition of “Shallow” from A Star Is Born in French is absolute beauty.

In Episode 5, “Ooo La La Liste,” Mindy (Rosalind Park) and her boyfriend Benoit (Kevin Dias) perform a passionate duet. However, prior to their performance, they have a heated dispute in their dressing room that creates a gloomy atmosphere. Benoit feels intimidated when Mindy’s new boyfriend, Nicolas de Leon (Paul Forman), brings her flowers before the show, so Mindy warns him that they may not have a future together.

The subsequent performance is an emotionally packed masterpiece that would have Bradley Cooper and Lady Gaga trembling. With Park on piano and Dias on guitar, the two exchange smoldering glances throughout the song. Towards the end, Mindy makes the audacious decision to steal the spotlight by overpowering Benoit’s vocals; Benoit then leaves Mindy on stage to a standing ovation.

When asked what it was like to sing such a popular song in French for the show, Ashley Park told Decider that she was initially “very scared” by the song. “Just because we can’t get the singer’s voice out of our heads doesn’t mean you should do an impression,” she added through Zoom. “I was ecstatic that the sequence arrived in such a story-driven location, and I felt that it advanced precisely what the characters were experiencing. I believe the preceding scene is an excellent springboard for it.”

In addition to the stress associated with the song selection, Park faced another significant obstacle before to filming the sequence. She added, “Until a few days ago, I believed we were singing it in English.” Press materials for Emily in Paris indicate that Park had only around 12 hours to memorize the translated lyrics before recording the song, and she told Decider thought the original version was hilarious.

“Therefore, I had to learn it in French, and I believe they initially liked a Google Translate version of it. Later, I’ll play you the song’s original lyrics, which I believe had the phrase “my daughter” instead of “my girl.” It was so hilarious,” she told Lily Collins and Camille Razat, who were also on the call.

“Me and Kevin Dias, along with our music producer Will Wells and music supervisor Brienne Rose, put in a lot of effort to make it sound as passionately gutteral as possible. “I’m quite delighted with how it turned out,” Park remarked.

The third season of Emily in Paris is replete with outstanding musical performances by Park, who sings everything from “Smile” by Nat King Cole to “Don’t Start Now” by Dua Lipa. Even Lily Collins gets an unexpected musical moment in Episode 2, but “Shallow” is without a doubt the season’s best song.

The third season of Emily in Paris is now available on Netflix.