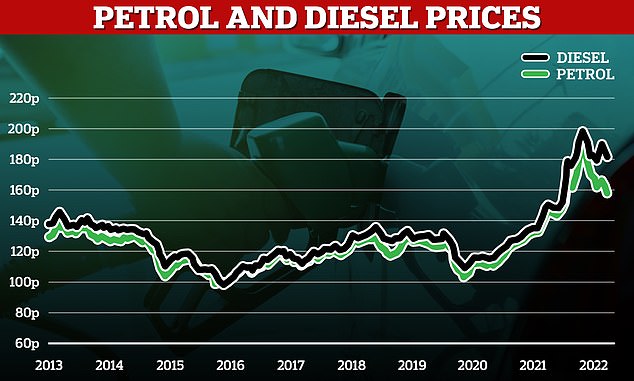 After months of rising fuel costs, Asda has reduced the price of petrol by an average of 4.4p per litre and diesel by 5.5p per litre.

The supermarket behemoth made the modifications during the previous two days at its 320 UK gas stations.

Asda did not publicly announce price reductions, with the RAC stating that the change should have occurred “far sooner.”

The remaining three fuel-selling supermarkets, Tesco, Morrison’s, and Sainsbury’s, have yet to reduce their pricing.

Fuel spokesman for the RAC, Simon Williams, stated, ‘While we are pleased that a major supermarket retailer has finally begun to heed our requests to pass on the massive drop in wholesale prices of both fuels, the fact that these price cuts have been made so quietly is surely an admission that they should have been implemented much sooner.

Asda currently charges an average of 153.5 pence for petrol and 176.7 pence for diesel, approximately 2 pence less than its competitors.

“We urge the remaining three supermarkets to soon catch up – or go even further – and provide drivers with much-needed respite from high gas costs the next time they fill up.

If they do so, the average price of petrol in the United Kingdom will drop from the present 157.8 pence to a lower level, which will benefit all motorists.

‘Despite these reductions, our study of wholesale data indicates that this is only the beginning, as there is ample room for a further 10p per litre drop in the average price of both petrol and diesel.

‘Perhaps it will be Asda that once again demonstrates leadership by further slashing its pricing to help motorists save money in the run-up to Christmas,’ the author writes.

It comes months after the RAC issued a warning about rising fuel prices due to a significant reduction in oil exports.

In an effort to stabilize plummeting crude oil prices, some of the world’s leading oil-producing nations decided in October to reduce their exports to Western nations.

Members of Opec+, a group of oil-producing nations includes Saudi Arabia and Russia, announced their intention to reduce output by two million barrels per day.

The United States argues the Saudi-led OPEC+ plan to restrict oil production by two million barrels per day — a big boost for Putin ahead of the European oil ban – demonstrates its alliance with Russia.

The United States stated that the Saudi-led OPEC+ decision to reduce oil production by two million barrels per day, a massive boost for Putin ahead of the European oil ban, demonstrates that it is aligning with Russia.

The spokesperson for the White House, Karine Jean-Pierre, termed the decision a’mistake’ and’misguided.’

The decision was made following a face-to-face conference in Vienna amongst energy ministers.

The alliance also stated that it was resuming collaboration between OPEC members and non-members, Russia being the most crucial. The agreement expired at the end of the year.

In addition to a nominal reduction in oil production, the big cut is a sudden reversal from the months spent restoring deep cuts taken during the height of the pandemic.

When the European prohibition on the majority of Russian imports goes into effect in December, the oil supply could be reduced further.

Motoring groups in the United Kingdom, notably the RAC, have warned that OPEC+’s export cut will ‘inevitably’ result in increasing gasoline and diesel prices.

And it was a big setback for drivers and businesses seeking to tighten their belts in the face of rising inflation and energy costs in the United Kingdom.

Simon Williams, RAC fuel spokesman, issued a warning about prospective increases in the price of gasoline and diesel, stating, “Such a severe reduction in oil production will unavoidably cause oil prices to rise, hence increasing the wholesale cost of fuel.”

When and to what extent do retailers choose to pass on these additional costs at their forecourts?

Following an OPEC+ meeting in Vienna, OPEC+ announced a decision that was criticized by the United States and stunned Europe.

The decision, according to OPEC+, was made to stabilize global crude oil prices.

In the early months of this year, prices skyrocketed due to a worldwide surge in demand as countries and businesses sought to revive their economies in the wake of Covid restrictions.

But they began to decline due to a decline in demand, which was mostly caused by inflation and global economic instability.

However, the action by OPEC+, whose members include Russia and Saudi Arabia, was expected to bolster Kremlin finances and help Putin weather an impending European ban on oil imports, thereby driving up global fuel costs.

The spokesperson for the White House, Karine Jean-Pierre, termed the decision a’mistake’ and’misguided.’

In September, the average price of a litre of fuel in the United Kingdom decreased by over 7 pence to 162.9 pence, according to the RAC.

This was the sixth largest monthly decline in average gasoline costs since 2000, although the reduction could have been greater, according to the mobility services firm.

In the past several months, the average price of petrol was 162.3p per litre, while diesel was 180.28p per litre, according to the RAC.

Simon Williams, a spokesman for the RAC’s fuel division, stated, “Drivers should have witnessed a far larger decrease, considering the wholesale price of supplied gasoline was approximately £1.20 for the entire month.

‘Given that the long-term margin on unleaded is 7p per liter, gas stations across the nation should have displayed prices in the vicinity of 152p.

In sharp contrast to this, RAC Fuel Watch data indicates that margins are approximately 17 pence per litre, which is 10 pence more than usual.

Mr. Williams observed that Morrisons offers reduced gasoline to consumers who spend a minimum amount at the store.

This is a form of promotion that “tends to occur mainly when supermarkets have lower wholesale pricing,” he noted.

Instead of “just presuming” that supermarkets are the cheapest fuel dealers because they have been in the past, he urged drivers to “search around for the best bargains.”

In September, the average price of a litre of diesel decreased by 3.5 pence to 180.2 pence.