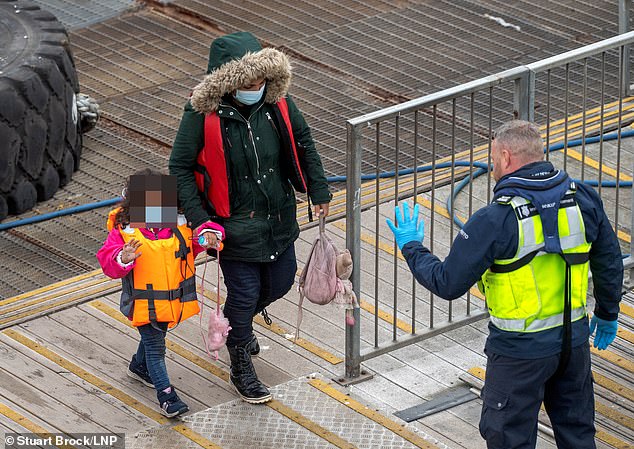 More than 200 migrants are estimated to have arrived in Britain by small boat today, bringing the total for April to more than 2,000.

While the Ministry of Defence (MoD) has yet to disclose official data for April 19, it is thought that at least 200 persons braved the Channel in stormy circumstances to attempt the risky trek across the 21-mile Dover Strait.

The first migrants arrived in the early hours of the morning – with around 30 people reaching the Dover Harbour, Kent, in a dinghy, around 4.30am.

A second dinghy carrying approximately 50 migrants – including several small children and babies – was intercepted by UK officials shortly before 9am.

Among them were at least three babies and a young child, who could be seen wrapped in warm coats and cradled by adults as they were brought to shore on board Border Force cutter Valiant.

He said the Home Secretary deserved ‘great personal credit’ for seeking to tackle the migration crisis in the Channel.

But Mr Mitchell added: ‘Will she accept that many of us have grave concerns that the policy she has announced simply will not work?’

The Home Secretary had earlier told MPs that ‘innnovative’ action was needed due to the profiteering of ‘evil’ people traffickers operating in the Channel.

‘Access to the UK’s asylum system should be based on need, not on the ability to pay people smugglers,’ Ms Patel told the House of Commons in a statement.

‘Change is needed because people are dying attempting to come to the UK on illegal and dangerous routes.’

Ms Patel dismissed claims that Home Office officials had failed to back her plans or ruled the scheme did not represent value for money.

She declared that ministers were required to take ‘tough decisions in the interests of our country’ and that the ‘global migration crisis’ required ‘innovative and international solutions’.

The £120million, five-year programme to send thousands of illegal economic migrants who arrive in the UK to the east African nation was announced last week.

It has faced strong pushback from civil and religious leaders, and today Boris Johnson was castigated by a hardline Brexiteer today for using the EU split to justify it.

Unveiling the agreement with Kigali last week, Mr Johnson invoked the referendum pledge of ‘taking back control’ of the UK’s borders, saying it was an ‘innovative approach made possible by Brexit freedoms’.

But writing in the Times today, former Brexit minister David Davis said ‘we are better than this’, adding: ‘The plan is fraught with practical problems, beset by moral dilemmas and hamstrung by extortionate costs.

‘And outsourcing our international obligations are certainly not the freedoms that Brexit was about winning.’

He said that while it was ‘laudable’ to try to cut down on cross-Channel migrants, ‘there is little evidence that outsourcing our obligations under the 1951 UN Convention on Refugees is going to break the people smugglers’ business model’.

It came as the Church of England opposition to the plan grew with Priti Patel’s local bishop joining the chorus of disapproval.

After church leaders including the Archbishops of Canterbury and York became embroiled in a row with ministers at the weekend, The Bishop of Chelmsford, the Rt Rev Dr Guli Francis-Dehqani said it was ‘cruel and inhumane’.

Dr Francis-Dehqani, who arrived in the UK as a refugee from Iran in the 1970s, said: ‘Those who find their way to this country, often through treacherous means, deserve to have their cases considered and processed here.’

Former Brexit minister David Davis attaked the £120m scheme to send those arriving illegally in Britain to the African nation, saying ‘we are better than this’.

Writing in the Times today, Mr David, who has become a backbench critic of Mr Johnson, said: ‘The plan is fraught with practical problems, beset by moral dilemmas and hamstrung by extortionate costs.