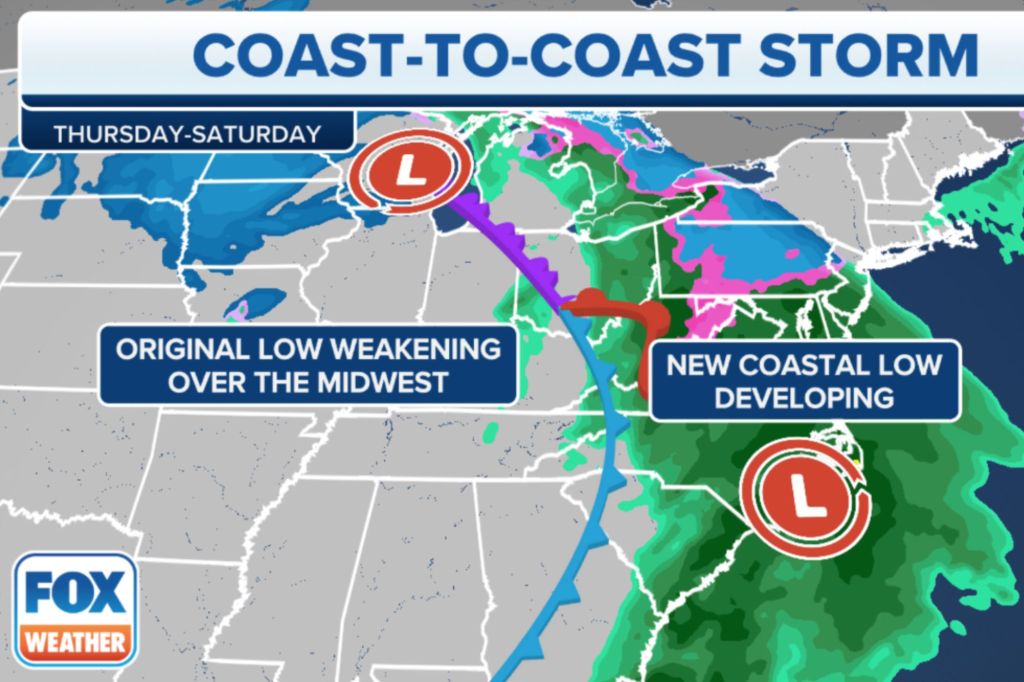 A winter storm traveling from coast to coast across the United States will strike the Eastern Seaboard on Thursday, capping up an eventful week of weather.

The storm system will generate a fresh region of low pressure just south of New England, which will deliver ice and eventually snow to the interior of the Northeast.

According to the FOX Forecast Center, the winter storm will begin in the early hours of Thursday morning. An icy mixture of freezing rain and sleet will initially develop in the Blue Ridge and Allegheny Mountains of Virginia and West Virginia, before moving into central Pennsylvania.

The icing will persist until at least midday on Thursday, with heavy accumulation in some regions.

Up to three-quarters of an inch of ice is likely in the mountains of Virginia and West Virginia, where conditions are predicted to be the worst. This amount of ice will undoubtedly bring down countless trees and cause numerous power outages.

A fresh low-pressure area will form along the East Coast.

Further north in Pennsylvania, freezing rain will transition to snow by mid-afternoon on Thursday, limiting ice accumulation to a point where it won’t cause too many power disruptions. However, ice and snow will continue to create extremely hazardous traffic conditions.

Ice Storm Warnings are in force from the Blue Ridge and Allegheny Mountains of Virginia and West Virginia to the western portions of central Pennsylvania, where the most destructive ice is forecast.

Winter Storm Warnings have been issued for the remainder of central and northeastern Pennsylvania, central and upstate New York, and sections of northern New England, where snow is predicted to predominate.

The coastal low-pressure system may deliver disruptive ice to the central Appalachians and interior Northeast.

Winter Weather Advisories have been issued for portions of the Interstate 95 corridor, including Philadelphia, Baltimore, and Washington, where a brief wintry mix of snow, sleet, and freezing rain could cause slippery conditions Thursday morning before the precipitation changes to rain in the afternoon.

According to the FOX Forecast Center, snow will blanket parts of central and northeastern Pennsylvania and upstate New York on Thursday afternoon, then spread into Vermont, New Hampshire, and western Massachusetts on Thursday evening.

Friday will be snowy throughout the day, and it will expand into Maine before ending on Saturday.

There are winter weather alerts in force over the Northeast and central Atlantic.

From upstate New York to western Maine, the snowfall amounts will vary with height, with the highest altitudes receiving over a foot of snow. Due to the presence of sleet and freezing rain, snowfall will be reduced at lower elevations.

As previously noted, the major cities along the I-95 corridor from Philadelphia to Washington will experience a brief snowy mix Thursday morning before the storm transitions into a rain event.

»As a coast-to-coast winter storm dissipates, the Northeast will experience heavy ice and snow«