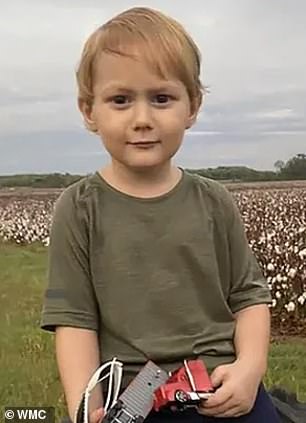 A new petition says that Blu Rolland died three months ago after being drowned in a toilet bowl by his mother’s live-in lover. Rolland’s body was discovered buried beneath the floorboards of his Arkansas residence last week.

A new affidavit reveals that the young boy whose body was discovered buried beneath the floorboards of his Arkansas house last week died three months ago after being drowned in a toilet bowl by his mother’s live-in boyfriend.

The horrifying finding was made by authorities probing the death of Blu Rolland, whose body was discovered by police last Friday, on what is believed to be the child’s sixth birthday.

According to an arrest complaint released Tuesday in Lee County Circuit Court, the now incarcerated mother of the child, 28-year-old Ashley Rolland, told police that her boyfriend Nathan Bridges was responsible for Blu’s death.

The mother, who is depicted with a black eye in her Saturday booking photo, claimed officers that Bridges was held in a toilet bowl as ‘punishment’ for biting the man’s finger.

The boy’s age was initially unclear; Arkansas State Police stated he was 6 years old, but court filings indicate he was born on December 16, 2017; hence, he was discovered on his fifth birthday. Karen Rolland, the boy’s grandmother, stated that he would have turned six last week.

According to the complaint, Ashley Rolland told police that Nathan Bridges murdered her son Blu. The mother, who has a black eye in her Saturday booking photo, told officers that Bridges punished her son for biting the man’s finger by holding his head in a toilet bowl.

Bridges is presently being held on allegations of murder, mistreatment of a corpse, tampering with evidence, and endangering the welfare of a child. He is not cooperating with investigators.

Ashley Rolland informed police following her arrest on Saturday, a day after the horrific finding, that Blu drowned on September 9 and died as a result. She is charged with capital murder, abuse of a corpse, tampering with physical evidence, endangering the welfare of a child, and two counts of allowing child abuse.

Why she has a black eye in her booking shot was not immediately evident.

A spokesperson of the St. Francis County Detention Center was unavailable for immediate comment.

The document indicates that Bridges, who faces the same accusations as his lover save those alleging child abuse, declined to be interviewed.

The injuries, classified by medical staff as severe burns, allegedly occurred when Bridges held the child’s head under water ‘as punishment for her behavior difficulties,’ according to the lawsuit.

In this instance, however, cops noted that the water was scalding hot, and Bridges eventually freed the child before she could perish like her brother.

The boy’s body was discovered beneath the floor of his mother’s home in Moro, a small village approximately 70 miles west of Memphis, Tennessee.

Evidence indicating children resided at the residence was scattered across the backyard.

He has been ordered to have no contact with Rolland’s surviving child, according to a document filed by investigators on Monday.

The body was discovered under the floorboards of Bridges’ home in Moro, which is 85 miles east of Little Rock. According to officials, Blu died as long as three months prior to the finding of his remains.

The children’s paternal grandmother, Karen Rolland, tipped police off to the couple’s alleged wrongdoing, according to the explosive affidavit.

Rolland allegedly told authorities that Bridges also damaged her surviving 6-year-old daughter during his alleged rant in September of last year. Observed on the left is a six-year-old girl with burns on her head, which police say they are investigating.

Karen, whose son is the father of the children, called police after her son arrived to pick up the children for a court-ordered visit. At that time, Ashley Rolland brought out her daughter, who ‘had obvious bruises that had scabbed over on top of her head,’ according to the police report.

According to the affidavit, the mother first claimed that the wounds were not burns and were caused by an allergic response, with Karen Rolland telling authorities that the girl “could barely walk” and that her clothes were contaminated with urine.

Her initial plea, the grandmother said, was for water and food.

Karen, inconsolable, told the authorities that she reassured the child that she was secure, recalling the terrified expression on the child’s face.

Karen Rolland, the children’s paternal grandmother, alerted authorities to the couple’s alleged wrongdoing when her son arrived to pick up the children for a court-ordered visit and found Blu gone and his sister badly burned and malnourished.

According to the affidavit, the mother first claimed that the wounds were not burns and were caused by an allergic response, with Karen Rolland telling authorities that the girl “could barely walk” and that her clothes were contaminated with urine. Her initial plea, the grandmother said, was for water and food. She is currently in a stable condition in the hospital.

The girl’s hair was also apparently hacked off, and she was suffering from starvation, shattered ribs, and a number of burn marks, some of which were not recent.

On a recently created GoFundMe page, a family member noted, “These injuries are assumed to be the result of her mother and her mother’s boyfriend.”

In an effort to explain this, police reported that her ex-daughter-in-law indicated that the youngster “was not at the residence.”

The affidavit adds that after taking her granddaughter to the hospital, Karen contacted police “to report she had knowledge that Blu was possibly deceased.”

Timmy Childers, 62, the father of Ashley Rolland, informed county deputies that his daughter had revealed to him that the boy was dead inside the residence.

Ashley Roland, 28, and Nathan Bridges, 33, are charged with murder, mistreatment of a corpse, tampering with evidence, and endangering the welfare of a juvenile.

The complaint adds that when officers entered the property, they discovered ‘newly nailed-down planks’ and ‘disturbed earth underneath’ on the floor. Under the first layer of dirt, they discovered a child’s flip-flop, a red and blue blanket, and ‘the distinct odor of rotting.’

They promptly acquired a search warrant and removed additional flooring and debris before discovering “an unidentifiable bulk suspected to be a little human body wrapped in several layers of plastic bags.”

The corpse was subsequently taken to the Arkansas State Crime Lab, where it is still being examined.

Kermit Channell, the director of the crime lab, stated last week that the state medical examiner would announce the cause and manner of death within 30 to 60 days.

Ashley Rolland, meanwhile, provided detectives with a questionable narrative of who buried the body, with police noting that she initially claimed she was in another room during the purported drowning.

Timmy Childers, 62, the father of Ashley Rolland, informed county deputies that his daughter had confessed to him that the boy was dead inside the residence.

The body was discovered under the floorboards of Bridges’ home in Moro, 85 miles east of Little Rock. Detectives believe the fatal injuries suffered by Blu, which led to his death, were inflicted well before the discovery, with officials speculating that the child had died as long as three months ago.

She stated that when she entered the restroom after Bridges had left, she observed her son “struggling to breathe and with a limp body.”

The affidavit states that she subsequently told investigators that Bridges “cut a hole in their wooden floor, dug a hole in the earth, and buried [Blu] under the house.”

Rebecca Fiting, whose relationship to Ashley Rolland was initially unknown, informed detectives that Ashley had previously told her that Blu had exited the restroom swollen and foaming at the mouth before collapsing and dying.

According to the document, the alleged witness said that Ashley Rolland at the time insisted that’she did not know what to do and had hidden Blu under the floorboards’

Karen stated that she had known the children were living in an unsafe situation for over a year, and that she had also been attempting to get custody.

Karen stated that she had been attempting to acquire custody of the children for more than a year and that she was aware that the children were living in an unstable environment.

Anita Widby, a family friend, created a GoFundMe page for funeral and other bills after learning that the mother had paid a ‘ridiculous amount of money’ to obtain a court order granting her weekend access to the children.

According to court papers, she has now successfully petitioned for the girl’s guardianship, and a judge granted the emergency order on Wednesday.

Authorities stated that they are probing the burns on the child’s head; her name was withheld owing to her age. She is currently in stable condition at a Memphis hospital. Both Ashley Rolland and Bridges continue to be detained.