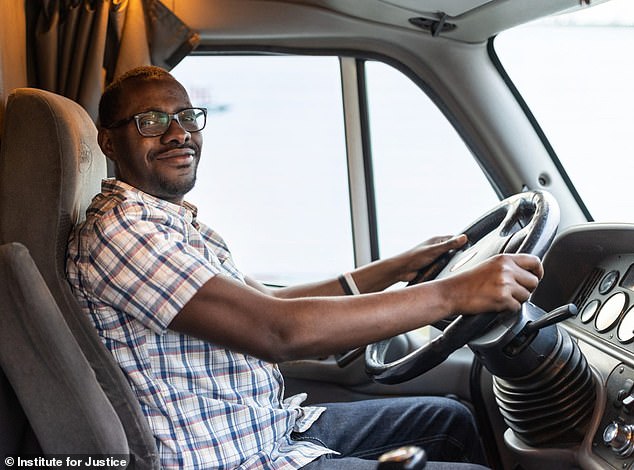 A trucker from North Carolina has declared legal war on the entire police force of Phoenix, Arizona, after cops took $39,500 in cash from him at the local airport on the suspicion that it was drug money.

The lawsuit, filed in April by the owner of Triple J Trucking, Jerry Johnson, requests the sum be returned in full for what he deemed to be ‘false charges’ by the force, which confiscated the cash during a stop at Phoenix Sky Harbor International Airport in August 2020.

Johnson, the owner and operator of a Charlotte-based firm, claims that the seizure was unreasonable since he had saved the funds to buy a new semi-truck.

Johnson was certain he could get a bargain at an auction in Phoenix, according to the lawsuit, so he flew domestically from Charlotte to Phoenix with the cash, only to be questioned by police about the perfectly legal haul.

During this ostensibly routine encounter, detectives grew convinced that Johnson, a middle-aged black man, was laundering money as part of an illicit narcotics transaction, according to the lawsuit.

Eventually, under the fear of imprisonment and more interrogation, Johnson handed over the $39,500 to the cops. Police have subsequently refused to refund the money, maintaining their earlier conclusion that the North Carolina resident was using his firm as a cover.

After a local court dismissed Johnson’s lawsuit last year, a libertarian-leaning public interest law firm filed an appeal in Arizona on Johnson’s behalf on Monday, a significant move in the lengthy legal drama. The updated lawsuit discloses that Johnson is still without his money and has not been charged with a crime after more than two years.

Jerry Johnson, the owner of Triple J Trucking, has conducted a court struggle against the entire Phoenix, Arizona police department, after cops confiscated $39,500 from him in 2020.

Since then, the Phoenix Police Department, directed by Brian Sullivan, has refused to refund the money, maintaining that the certified North Carolinian was up to no good. Outside of the state’s arguments, the force has not yet commented on the matter.

Johnson stated in a news statement published by The Institute for Justice, “I traveled to Phoenix believing I could obtain a fantastic bargain on a vehicle that would help me to grow my business.”

The company owner said, “Instead, the cops stole my money without ever charging me with a crime.” Losing my funds was a challenge, and now my business is barely surviving.

“I’m fighting for my money, but I’m also trying to prevent this from happening to anyone else.”

Local forfeiture rules allow investigators to confiscate property suspected of being associated with criminal conduct even if the owner has not been charged with a crime.

The next day, following hours of detention, Johnson came home without the money and the truck. He was never formally accused of a crime.

In August of 2020, Johnson went domestically with the cash from his home in Charlotte to Phoenix Sky Harbor International Airport, but was promptly questioned by investigators about the completely legal haul.

In light of this, an Arizona judge presiding over the case ruled last year that the officers’ actions were justified, citing alleged flaws in Johnson’s account and circumstantial evidence offered by prosecutors that, according to the judge, bolstered the department’s claims he had bad intentions with the money.

Included in this proof was Johnson’s previous criminal record, as well as the fact that he purchased the ticket very “last-minute” with a short turnaround.

The jurist also observed that authorities reportedly noted Johnson’s “nervous look” and manner during the 2020 encounter, as well as the discovery of three cell phones.

In his lawsuit, Johnson, the owner and operator of a trucking company located in Charlotte, asserts that the seizure was unfair. He stated that he had saved enough money to buy a new semi-truck at an Arizona city’s auction.

In court, prosecutors also said that officers noticed the stench of marijuana originating from the cash, an allegation that was not supported by evidence other than at least one report from an unidentified officer.

With Johnson’s and the institute’s appeal filed on Monday, however, the judge’s verdict may soon be called into doubt, as the public interest firm’s attorneys point out that Johnson produced statements and tax returns to prove ownership and validity of the funds.

According to the lawsuit, Johnson is entitled to the immediate restoration of his money because, more than two years later, he has not been charged with a crime and is thus entitled to it.

In a press release issued Monday in conjunction with his client’s lawsuit, senior attorney at the Institute for Justice Dan Alban cited state law in support of these demands. His client is seeking the return of the cash as well as unspecified damages for the incident’s detrimental impact on his business.

The state adopted revisions in 2017 to increase the evidentiary requirements for airport forfeitures from “a preponderance of evidence” to “clear and convincing evidence.”

This precedent has thus far failed to assist Johnson.

After a court dismissed Johnson’s lawsuit last year, a libertarian-leaning public interest law firm filed an appeal on his behalf in Arizona on Monday, a significant move in the lengthy legal process. The lawsuit discloses that Johnson is still without his money more than two years after the event and, more significantly, has not been charged with a crime.

Before money may be forfeited in Arizona, prosecutors must provide clear and compelling proof that it is tied to illegal behavior, according to Alban’s statement.

The judge said, “But instead of holding the state to its duty of establishing guilt, the court forced Jerry to show his own innocence.”

If the forfeiture is allowed to remain, according to Alban, ‘it would create a dangerous loophole undercutting Arizona’s efforts to safeguard property owners, including the state advice adopted only a few years ago.’

The institute, which is already entangled in a number of similar challenges originating from other legally dubious airport forfeitures, claims that the outcome of Johnson’s case might have far-reaching consequences for Arizona’s asset forfeiture standards.

The Phoenix Police Department, led by Chief Brian Sullivan, has not publicly commented on the matter and did not immediately respond to a request for comment from DailyMail.com on Sunday evening.

In the meanwhile, forfeitures at airports related to alleged crimes remain largely unclear, with a recent USA Today investigation revealing that the DEA collected more than $209 million from at least 5,200 people in 15 airports over the previous decade.

The Arizona Court of Appeals is anticipated to provide a response to Johnson’s legal team’s appeal within the next several weeks.