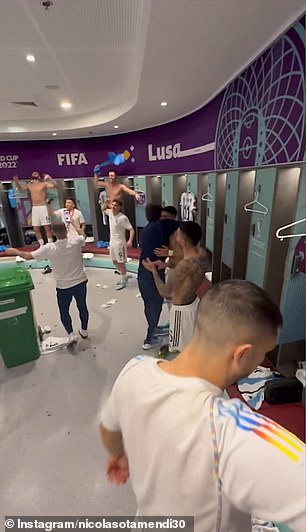 Following their World Cup victory over Croatia last night, jubilant Argentina players sang a chant in their locker room that was derogatory to the English and made reference to the Falklands War.

As they taunted Brazil and England in the new song that has grown famous among Argentina fans during the competition, Lionel Messi’s teammates peeled off their shirts in exuberant scenes.

A passage in the song’s lyrics that approximately translates to “f***ing English in the Falklands, I don’t forget” is “Ingleses putos de Malvinas no me olvido.”

The Falklands are referred to by their Spanish name, “Las Malvinas,” and the phrase “putos” used to characterize the English frequently has homophobic overtones and can also indicate cowards.

After the team’s 3-0 triumph, defender Nicolas Otamendi posted video of the celebrations to his Instagram Stories.

Teammates Lisandro Martnez of Manchester United and Julian Alvarez, a two-time goal scorer for Manchester City, were observed participating in the chorus.

Brazilian, what happened, the five-time winners messed up, goes the complete song. Messi traveled to Rio and returned with the trophy. We are the Argentine band, and we will support them no matter what because we want to win the world championship. I am like that; I am an Argentinian who doesn’t forget that the Falkland Islands are f***ing English. I’m like that; I support you and travel wherever with Argentina.

The initial lines make reference to Argentina’s victory in the Copa America of 2021, which was hosted by Brazil, their main adversary and the South American equivalent of the European Championships.

Although the Falklands have been a British foreign territory since 1833 and the islanders have overwhelmingly chosen to remain a member of the UK, Argentina continues to assert its sovereignty over the area.

Argentina, meanwhile, asserts that it bought the Falkland Islands from Spain in 1816 before Britain proclaimed her dominance.

The archipelago was attacked by Argentine forces in 1982, but they were repulsed in a ten-week conflict Margaret Thatcher ordered, restoring British control of the islands.

Fans of Argentina have started repeating a different song in Qatar that makes references to both the English and the Falkland Islands.

The song’s lyrics read, “Oh Brazilian, you don’t know what awaits you when you come to play La Bombonera. We chased the English everywhere, the Germans are terrified to cross us.”

As the men in the Falklands did, “I give my life for the colors of my nation. When I die, I want a cloth with these colors, not any flowers.”

Messi performed like a talisman in the semi-final victory over Croatia last night.

He scored Argentina’s opening goal from the penalty spot and then made a stunning run past defender Josko Gvardiol to set up Alvarez for Argentina’s second and third goals.

Messi is the greatest player in history, Argentina manager Lionel Scaloni declared following the game. I am certain… It is fortunate and an honor to witness him wearing the light blue and white.

With his appearance, Messi equaled German legend Lothar Matthaus for the most male appearances in World Cup finals.

When he scored his 11th goal from 12 yards out on December 13, he broke Gabriel Batistuta’s record for the most goals scored by an Argentinean player at a World Cup, setting a new national record.

Argentina under Scaloni were just the sixth team in World Cup history to lose their first game but still advance to the championship game.

The first three all lost the championship trophy in the end, but Spain won in South Africa in 2010 after losing to Switzerland in the first game.

One of the tournament’s opening surprises was Argentina’s 2-1 loss to Saudi Arabia in Qatar, which made people wonder if Messi and his countrymen had what it took to advance.

On their way to the final on Sunday, they have since defeated Australia, Holland, and Croatia in the elimination round as well as Mexico and Poland in Group C.

The match between surprise package Morocco and the defending champions France on Wednesday evening will determine their opponents, giving them a benefit of an extra day to prepare.