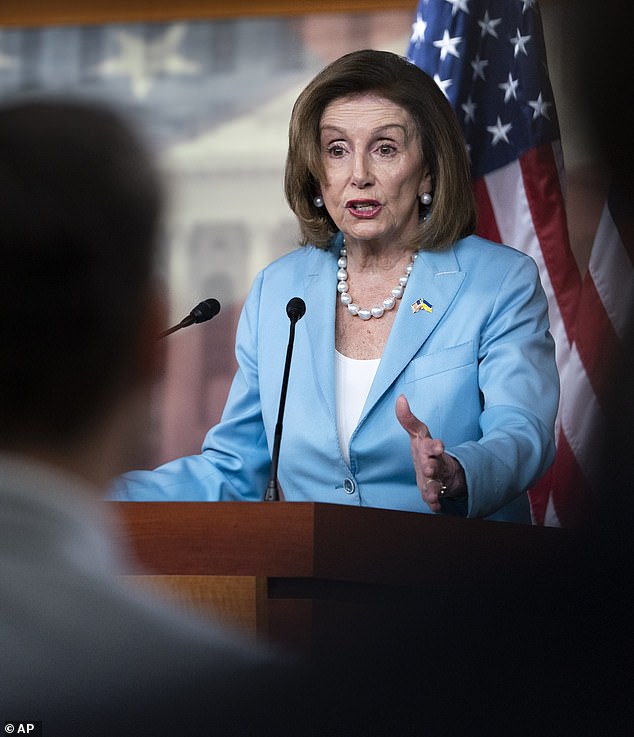 Cordileone said in a statement on Friday that she will not be admitted to Holy Communion in the Archdiocese of San Francisco, and cannot present herself to receive the Eucharist, until she backs away from her support for abortion.

It is the latest development following the leak of the Roe v. Wade draft abortion decision and the latest bid by the church to hit back at liberal politicians who say they are Catholic but back terminations.

President Joe Biden, who describes himself as a devout Catholic, has also been threatened with being barred from communion because of his pro-choice stance.

‘A Catholic legislator who supports procured abortion, after knowing the teaching of the Church, commits a manifestly grave sin which is a cause of most serious scandal to others,’ Cordileone says in the letter.

‘After numerous attempts to speak with her (Pelosi) to help her understand the grave evil she is perpetrating, the scandal she is causing, and the danger to her own soul she is risking, I have determined that the point has come in which I must make a public declaration that she is not to be admitted to Holy Communion unless and until she publicly repudiate her support for abortion ‘rights’ and confess and receive absolution for her cooperation in this evil in the sacrament of Penance,’ he adds.

‘Therefore, universal Church law provides that such persons ‘are not to be admitted to Holy Communion.

Cordileone insisted that the decision was ‘pastoral’ and not ‘political’.

The Catechism of the Catholic Church calls abortion ‘evil’ and the teaching has not changed and remains unchangeable’.

Direct abortion, that is to say, abortion willed either as an end or a means, is gravely contrary to the moral law,’ it says, before calling abortion and infanticide ‘abominable crimes.’

In a 2008 interview with C-SPAN, Pelosi said being denied Communion would be ‘a severe blow, the Catholic News Agency reported.

Pelosi has only been barred from communion in San Francisco, and it is up to Catholic bishops in other parts of the country whether she be allowed.