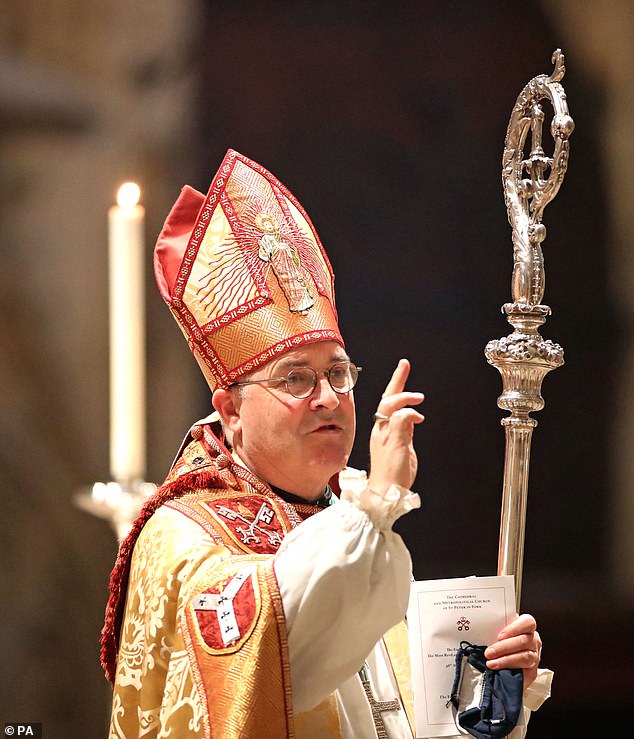 Tory MPs have called the Archbishop of Canterbury’s stinging intervention over the government’s plan to send thousands of migrants with a one-way ticket to Rwanda ‘clumsy’.

Boris Johnson‘s government said it would help to break people-smuggling networks and stem the flow of migrants across the Channel, which has faced immediate and heavy criticism from politicians and charities.

He has been joined in his sentiments by Archbishop of York Stephen Cottrell who called it ‘depressing and distressing’.

While cabinet minister Jacob Rees-Mogg, a committed Catholic, said the government is not ‘abandoning’ migrants but taking on a ‘very difficult responsibility’ with the ‘intention’ of doing good’ which he said is important within Christianity.

Mr Welby also called for a ceasefire in the Russian war on Ukraine and spoke of his concern for families struggling during the cost-of-living crisis and for those bereaved by Covid-19.

In his Easter sermon at Canterbury Cathedral, Justin Welby said the UK has a ‘national responsibility’ as a ‘Christian country’ to not ‘sub-contract our responsibilities’

Rwanda plan is against God’s judgement, says Archbishop of Canterbur

In his 8.10am sermon, the Archbishop said: ‘The resurrection of Jesus is not a magic wand that makes the world perfect.

‘But the resurrection of Christ is the tectonic shift in the way the cosmos works. It is the conquest of death and the opening of eternal life – through Jesus, a gift offered to every human being who reaches out to him.

‘Not just for individuals but setting a benchmark for all of society because God is lord of every society and nation.’

He will continue: ‘Let this be a time for Russian ceasefire, withdrawal and a commitment to talks.

‘This is a time for resetting the ways of peace, not for what Bismarck called blood and iron. Let Christ prevail. Let the darkness of war be banished.

‘And this season is also why there are such serious ethical questions about sending asylum seekers overseas.

‘The details are for politics and politicians. The principle must stand the judgment of God, and it cannot. It cannot carry the weight of resurrection justice, of life conquering death.

‘It cannot carry the weight of the resurrection that was announced first to the least valued, for it privileges the rich and strong.

‘And it cannot carry the weight of our national responsibility as a country formed by Christian values, because sub-contracting out our responsibilities, even to a country that seeks to do well like Rwanda, is the opposite of the nature of God who himself took responsibility for our failures on the cross.’

He also said the love of god and hope triumphs over ‘nightmares’ and ‘global power’.

Migrants wait to disembark at the Port of Dover after being rescued while crossing the English Channel, in Dover, Britain, April 17, 2022

Jacob Rees-Mogg, speaking on Radio 4’s The World This Weekend programme, said he disagrees with the Archbishop of Canterbury’s interpretation of the Government’s new immigration policy to send asylum seekers to Rwanda

Echoing Mr Welby over his thoughts on the migrant scheme, the Archbishop of York Stephen Cottrell said at York Minster ‘we can do better than’ the Rwanda scheme.

Mr Cottrell said: ‘It is so depressing and distressing this week to find that asylum seekers fleeing war, famine and oppression from deeply, deeply troubled parts of the world will not be treated with the dignity and compassion that is the right of every human being, and instead of being dealt with quickly and efficiently here on our soil will be shipped to Rwanda.

‘After all, there is in law no such thing as an illegal asylum seeker. It is the people who exploit them that we need to crack down on, not our sisters and brothers in their need. We don’t need to build more barriers and cower in the darkness of the shadows they create.’