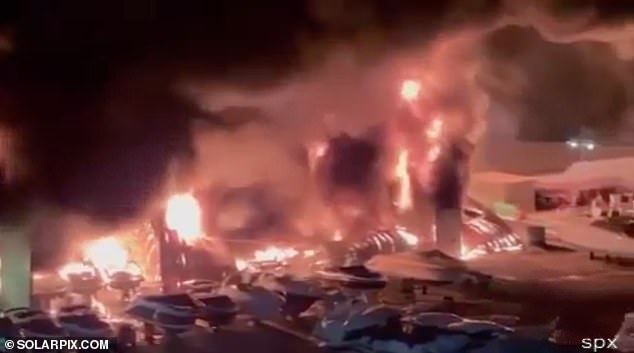 Reportedly, a large fire at a storage facility in Marbella, Spain, has destroyed more than eighty boats.

According to local accounts, many of the vessels in the container at the La Bajadilla fishing port were worth millions of pounds.

At approximately 7 p.m. local time, the emergency alarm sounded, and police, firefighters, and ambulances were dispatched.

The port’s entrance was sealed off, but massive crowds gathered as the building caught fire.

The facility, which belongs to Marina Marbella, is said to be utilized for boat storage and maintenance.

A massive fire at a Marbella, Spain, storage facility may have damaged up to 100 yachts.

About 9 p.m., local authorities remained on the scene and brought the fire under control.

According to a local account, which has yet to be confirmed by officials, there were approximately 80 boats between 20 and 40 feet long in the warehouse when it caught fire.

Smoke and flames are shown on film billowing from the wrecked structure atop the marina.

According to local sources, British boat owners were likely caught up in the turmoil.

A spokesperson for the Marbella Town Hall said that approximately thirty firefighters are battling a fire at a marine facility in the La Bajadilla port.

A local report, which has yet to be confirmed by officials, stated that over 100 boats between 20 and 40 feet in length were at the warehouse when it caught fire.

Images depict smoke and flames emanating from the ruined structure over the marina.

The town’s mayoress, Angeles Munoz, added in a tweet, ‘I’m monitoring the situation after a fire broke out at the warehouse in the fishing port of Marina Marbella.

No other structures in the vicinity have been harmed.

The proprietors could not be reached for comment on Wednesday night.

Marina Marbella, which was created by two Swedish sailors who began their boat business in Marbella but now operate in the United Kingdom and Portugal, provides a variety of maintenance services, including dry docking and winterising.

The cause of the fire, which was contained at approximately 9 p.m. local time, is not yet known.

Their further services include boat rentals and assistance with the purchase and delivery of vessels.

In the warehouse were around 100 vessels between 20 and 40 feet in length. The most of them were worth millions of pounds, according to an article on ElDebate.com.

The structure serves as a winter port where boats are stored after being hauled out of the water and where some were being repaired.

The cause of the fire, which was contained at approximately 9 p.m. local time, is currently unknown.

About 9 p.m., local authorities remained on the scene and brought the fire under control.