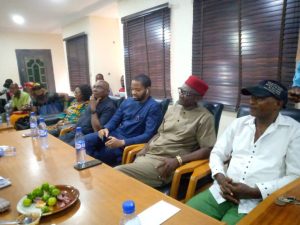 The Campaign Council of All Progressives Grand Alliance, APGA, Dunukofia Local Government Area has inaugurated a team to embark on reconciliatory talks with aggrieved members of the party in the area.

The reconciliatory move, which is first on the work template of a newly set-up harmonization committee, is intended to dissect grievances, make amends and build unanimous understanding ahead of the November sixth governorship election in Anambra State.

Correspondent Daniel Ezeigwe reports that members of the committee were selected two per town across the six towns under Dunukofia Local Government Area and is chaired by the Executive Chairman of Anambra State Physical Planning Board who is the Special Adviser to Governor Willie Obiano on Digital Economy, Barrister Chike Maduekwe.

Barrister Maduekwe who said that the committee would immediately get to work, said the most important thing was for all APGA members to stay focused and work for the ultimate price.

The Anambra State Commissioner for Budget and Economic Planning, Mr Mark Okoye, noted that while unification was important for the election, it was also imperative not to take rash steps to accommodate elements who will disorganized the APGA family, and maintained that the November sixth governorship election could either make or mar APGA as a party.

In his remarks, the Chairman, APGA Campaign Council for Dunukofia Local Government Area, who is also the Director General, Youth Mobilization, Technology and Innovation, Anambra State, Engineer Emeka Okonkwo, said that the idea for reconciliation had become necessary giving that there were people in the party from the area who had become disenchanted because of certain party internal issues which must be addressed urgently.

On his part, the APGA Chairman, Dunukofia Local Government Area, Mr Vincent Ezennia, pointed out that the first step to unity was peace, a cardinal agenda of the committee and noted that members of the reconciliatory team were people with track records.

Earlier, the Transition Committee Chairman of Dunukofia Local Government Area, Mr Emeka Chinweze, opined that it was imperative for all members of the party in the area to stand together in common understanding to enable the party to achieve success during the election.