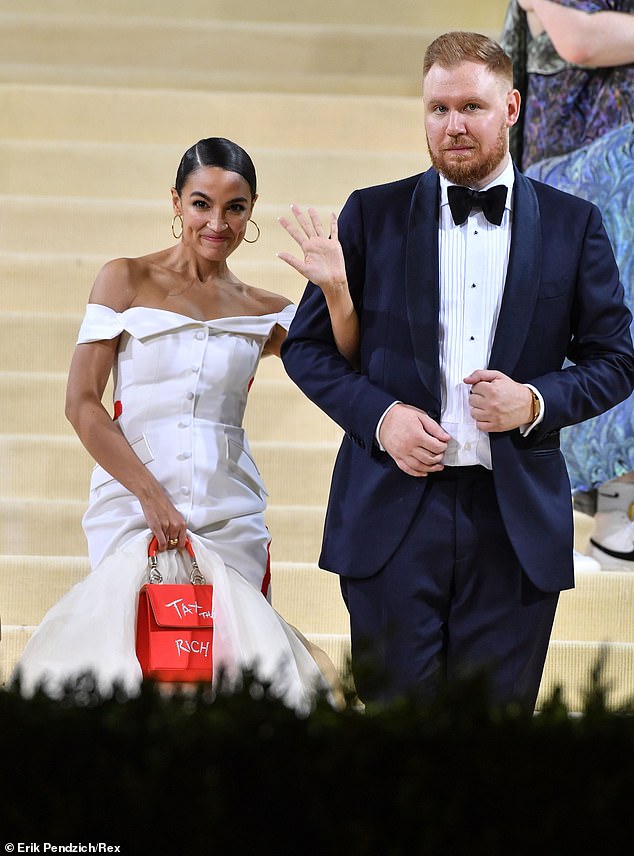 Democratic Rep. Alexandria Ocasio-Cortez took to Instagram Live on Thursday night where her first order of business was to blast the Supreme Court over its leaked draft opinion of Roe Vs Wade which could see abortion laws overturned across the country.

During her more than hour long broadcast to around 4,500 followers, the 32-year-old Squad member didn’t mince words.

‘It is so awful that we are in this moment’, she began. ‘I really think that one of the most effective things we can do is to help people whose rights are being attacked right now.

‘The Supreme Court has long been radicalized and you have basically several people who have lied, and it certainly feels like they absolutely misled people in their statements in order to get on the Supreme Court’, Ocasio-Cortez said laughing nervously.

Several Justices were appointed by a man who facilitated in an insurrection against the United States Government and that is cleerly being reflected in the decisions coming out from the court.

‘I figured one of the best ways to help people is to directly assist people who need abortions in places where they can’t get them. If you are in any place that is outlawing abortion, trying to prevent you from accessing it, Texas, Oklahoma, you are welcome in New York and we will do what we can.

‘It never stops shocking me the amount of ignorance that goes into this,’ AOC stated.

During a meandering stream-of-consciousness ramble, the prominent progressive Democrat then went on to discuss a parable in an attempt to compare a story from the Bible to that of modern times and the issues facing women.

As someone who grew up in in a Christian household I’ve been thinking a lot about a parable of Christ and if you are would indulge me for those who may not be Christian and familiar with the story… it’s a story that is relevant in general.

‘The parable is of a woman… a lot of people may have heard the phrase “Let he who is without sin throw the first stone,” in that story there is a woman who was not allowed to be granted a divorce from her husband and so for all intents in purposes they were not really together. There were also the pharisees, strong religious and political leaders. Many of them were in a physical relationship with this woman…’ AOC started, before heading off at a tangent.

‘At one point one of the pharisees is caught with the woman and she is immediately marched out into the town square before she is able to get dressed. Everyone surrounds her and try to figure out if they should punish her.

‘Lets be really clear about the power dynamic here when you have several powerful people doing this. It frankly really blurs the lines of consent because what choice would she have when they hold so much power?,’ AOC continued.

Christ takes an interest and call him over for advice. He draws something in the sand and people come out to see ‘Let he who is without sin throw the first stone.’

‘I think there is deeper meaning to that story,’ Ocasio-Cortez said as she entered an analytical phrase.

‘Christ does not condemn her. The people who did something wrong there were those who were abusing her power. There are a lot of those kinds of types around today, trying to abuse women and take their autonomy away. All in the name of a book that they haven’t really studied that closely.

‘I believe in the separation of Church and State. My faith has nothing to do with my public service because we have a secular Democracy. If it’s not secular it’s a theocracy and it allows for all sort of horrifying human rights abuses, which is what this is. I do not impose by faith onto others and that’s why our Democracy is so important. The vast majority of Americans believe in a person’s right to choose.’

Throughout the broadcast, he engagement ring was on full display as she continued to gesture with her right hand which gave viewers an up-close view of her new rock.

She confirmed her engagement to her followers referring to it as ‘happy news’.

Earlier on Thursday, she tweeted: ‘It’s true! Thank you all for the well wishes’.

AOC met Roberts when they were both undergraduates at Boston University.

He attended the Met Gala in 2021 when AOC wore the infamous ‘Tax the Rich’ dress and has appeared in her Instagram videos.