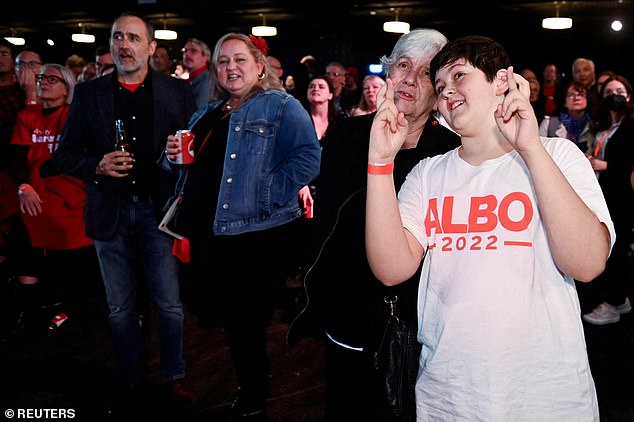 Anthony Albanese’s son Nathan has stolen the spotlight from his father after he won the election.

But it was his 21-year-old son, who he had with his ex-wife and former NSW Labor MP Carmel Tebbutt, who had many talking.

‘Nathan Albanese is a very good looking young man. And Mum Carmel is in the crowd and acknowledged! How lovely,’ a woman tweeted.

Mr Albanese described Nathan as his ‘good luck charm’ earlier in the campaign, and paid tribute to his son and his mother in his victory speech.

‘To my proudest achievement, my son, Nathan. Thank you, mate, for your love and support,’ the new PM said.

‘Your mother, who’s here tonight, Carmel, we are both so proud of the caring, wonderful, smart young man you have become.’

The pair shared a tender moment on stage, which captured the hearts of adoring Aussies watching at home.

Good old Nathan Albanese totally has the look of ‘holy f**k my dad is the Prime Minister’,’ a man tweeted.

‘More than a tear. Albo also thanked Carmel Tebbut (Nathan’s mother), his son Nathan and his partner Jodie Haydon. Says a lot about the man Albanese is,’ another woman said.

‘Anthony Albanese is a good man, a decent person. Here he is with his ‘proudest achievement’, his son Nathan, and his new partner,’ a man posted to Twitter.

‘We will protect Nathan Albanese at all costs,’ another said.

Mr Albanese said his son, who is still completing university in Sydney, doesn’t know whether he will live in Kirribilli House or remain in their family home in Marrickvi

Tonight the Australian people have voted for change. I am humbled by this victory and I’m honoured to be given the opportunity to serve as the 31st Prime Minister of Australia.’

‘My Labor team will work every day to bring Australians together, and I will lead a government, worthy of the people of Australia’.

The joyous atmosphere took a strange turn when Mr Albanese reacted angrily to some rowdy supporters, pausing his speech to yell: ‘Down. Down. Down. Down. No. No.

‘Can we have order, please? Can we have a bit of order? I intend to run an orderly government and it starts here, so behave.’

Mr Albanese – who was raised in housing commission by a single mother – also paid tribute to the outgoing Prime Minister, saying: ‘Scott very graciously wished me well, and I think him for that, and I wish him well.

‘And I thank him for the service he has given to our country as Prime Minister. I would like to thank Jenny Morrison and their two daughters for their contribution and sacrifice as well.’

Outlining his priorities for the next three years, Mr Albanese said: ‘Together we can end the climate wars.

‘Together we can take advantage of the opportunity for Australia to be a renewable energy superpower.

‘Together we can work in common interests with business and unions to drive productivity, lift wages and profits.

‘I want an economy that works for people, not the other way around.

‘Together we can strengthen universal healthcare through Medicare. We can protect universal superannuation.

‘And we can write universal childcare into that proud tradition.’

The Labor leader also vowed to implement a national anti-corruption commission after his party won from Opposition for only the fourth time since World War II.

His first task will be a Quad security meeting with Japan, the US and India on Tuesday in Tokyo.

At about 11pm Scott Morrison delivered a concession speech to devastated Liberal supporters after calling Mr Albanese to congratulate him on Labor winning power for the first time since 2013.

Speaking alongside his wife Jenny and two daughters to the Liberal faithful in Sydney, Mr Morrison said: ‘Tonight, I have spoken to the Leader of the Opposition and the incoming Prime Minister, Anthony Albanese.

‘And I’ve congratulated him on his election victory this evening.

‘I have always believed in Australians and their judgement and I’ve always been prepared to accept their verdicts.

‘And tonight they have delivered their verdict and I congratulate Anthony Albanese and the Labor Party and I wish him and his government all the very best.’

Mr Morrison, a Christian who prays every day, paid tribute to his family, saying: ‘I still believe in miracles as I always have.

‘And the biggest miracles as I said three years ago were standing beside me and here they are again tonight with Jenny and my daughters. They are the greatest miracle in my life.’