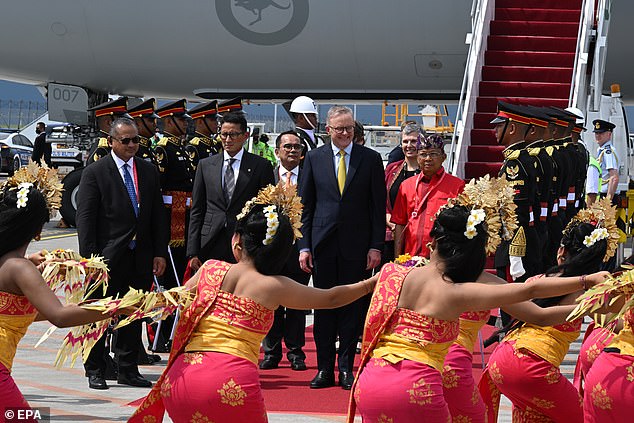 Premier Anthony Albanese has stated that he will hold formal discussions with Chinese President Xi Jinping during the G20 summit.

Since 2016, the bilateral meeting will be the first meeting between the leaders of the two countries.

On Tuesday afternoon, Mr. Albanese will meet with Mr. Xi, preceding a variety of other bilateral discussions at the international conference.

Mr. Albanese expressed his eagerness for the conversations, calling them as fruitful.

Australia will advance its own stance.

Mr. Xi (seen on October 22 at Beijing’s Great Hall of the People) had not initially booked a meeting with Mr. Albanese, despite both officials attending a series of summits throughout Asia.

Mr. Albanese met briefly with Premier Li Keqiang of China in the margins of the East Asia Summit.

Mr. Li was quoted in a Chinese media article following the meeting as saying that China was willing to “meet Australia halfway” and try to foster “sustained, sound, and steady” progress in relations.

Trade Minister Don Farrell stated in a keynote address prior to the G20 conference that Australia needs to diversify its trade connections, as the geostrategic case for a free trade agreement with the European Union had increased.

Premier Li Keqiang, who had a brief casual conversation with Mr Albanese at a dinner in Cambodia on Sunday, stated that China and Australia should meet ‘halfway’ in order to restore relations.

If it was ever feasible, our trade policy cannot be separated from geopolitics.

Senator Farrell said that Mr. Albanese will inform the Chinese president that the lifting of $20 billion in trade barriers is essential for normalizing relations between Canberra and Beijing.

While China’s taxes on barley and wine are being legally challenged through the World Trade Organization, Australia is ready to negotiating “potential off-ramps” to reach a mutually agreeable resolution, according to the minister.

On Sunday, the final day of the Cambodian summit, the Prime Minister met with Vice President Joe Biden for forty minutes.

The two discussed security agreements, the climate, and Pacific participation.

Mr. Albanese has been invited by Indonesian President Joko Widodo to deliver the keynote address at the B20 gathering, which brings together business and political leaders from the world’s largest nations.

His address will center on the global recovery from the COVID-19 pandemic and the taming of inflation’s impact on countries.

Mr. Albanese will urge international leaders to collaborate in the interests of all nations by removing tariff barriers and expanding trade agreements.

Together, we can accomplish far more than we ever could on our own, he will remark.

“Recovering together is essential to recovering more effectively.”

Climate change mitigation will also feature prominently during the meeting.

The Prime Minister will urge governments and corporations to invest in renewable energy sources and promote Australia’s role in the global transition to renewables.

He will say, “We recognize Australia’s potential to become a renewable energy superpower, and we are working to expand our clean energy export industry.”

We are committed to cooperating with other nations to help them reduce their emissions, expand their economies, and improve their living conditions.

As a result of Russia’s invasion of Ukraine, world leaders will also discuss global food insecurity and the global response to pandemics.

Adam Bandt, leader of the Greens, stated that a comprehensive review of the effectiveness of Australia’s trade agreements was required, and he advocated for a regional de-escalation of tensions with China.

He stated, “I wish the government success in re-establishing better relations with China.”