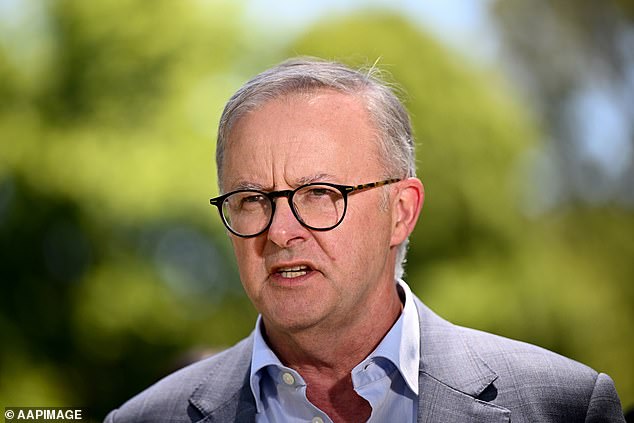 In addition, a new entity will be established to coordinate cooperation between the Territory and Federal Governments.

Mr. Albanese stated, “We have agreed to establish a regional controller for central Australia, and that person will be Dorrelle Anderson.”

Dorrelle is the ideal candidate for the position, as she is very experienced and familiar with the local community.

She will be responsible for ensuring that federal and state initiatives are coordinated as effectively as feasible.

Earlier, the Prime Minister met with the leaders of Alice Springs to discuss the escalating adolescent crime rates in the isolated city, which one of his senior ministers has described as a disaster.

Mr. Albanese stated that the situation is tough, with many residents fed up with the violence and clamoring for “boots on the ground.”

Tuesday he tweeted, “All Australians deserve to live in safe and healthy communities.”

I am in Alice Springs to meet with community groups, the council, the government of the Northern Territory, and frontline services.

Alcohol and dysfunctional remote communities, according to NT Chief Minister Natasha Fyles, are to blame, but another Howard-era intervention with alcohol restrictions and welfare controls is not the solution.

“We need to speak with the Commonwealth about needs-based funding for certain services,” she told Sky News upon arrival in Alice Springs on Tuesday.

I do not feel federal police or military participation is necessary.

Ms. Fyles stated that the challenges in Alice Springs were multidimensional and required immediate resolution.

She stated, “I’ve met with police in Alice Springs today, and they’re just as frustrated as I am, but we won’t give up; we will continue to work on solutions, and I believe those solutions will come from the NT, not the military.”

Lhere Artepe Aboriginal Corporation, a collection of traditional owners from Alice Springs, stated that decades of “chronic and systemic neglect” in isolated areas had fueled the situation, which was “out of control” and “reprehensible.”

Chief executive Graeme Smith stated that the men, women, and children on the streets of Alice Springs are infrequently (local) Arrernte people.

People are nearly all from jungle communities where they live in third-world conditions with little hope for the future.

He stated that for many, the streets of Alice Springs were preferable to their own “crowded, broken, and impoverished” neighborhoods.

Mr. Smith stated that recently repealed alcohol laws from the intervention era added to the problem.

Earlier, Bill Shorten, a Labor front-bencher, stated that the crisis deserved quick action, but that the matter could not be resolved just by the police.

‘It will involve addressing the underlying reasons of the pain and misery,’ he said.

It is an emergency. There are without a doubt significant concerns there.’

He stated that the residents of Alice Springs did not desire another harsh response from Canberra.

Jamie Chalker, the police commissioner for the Northern Territory, stated that he would welcome any federal assistance, including extra police, but vehemently opposes the deployment of the military to enforce martial law.

He stated, “We cannot arrest our way out of this.”

Mr. Chalker stated that poor social policies and alcohol contributed to the situation, although he refrained from asking for the return of dry zones.

“My people continue to flood the line, but where is everyone else?” he asked on ABC Radio.

In these rural places, there are numerous services that are just unavailable on the ground.

Add alcohol consumption and family issues to the mix, and we’re also dealing with the consequences.

In addition to towns in the Kimberley region, he stated that Townsville was also experiencing serious social order concerns.

He stated, “There is something profoundly underlying this.”

Sussan Ley, the federal deputy leader of the Liberal Party, did not advocate for the return of strict alcohol bans, but she did say the government needed to do better.

She stated, “These are complex issues that are not easily resolved, and there must be some tough love.”

Peter Dutton, leader of the opposition, called it “the most important issue facing our country today.”

He stated, “There have been reports of children running around with machetes and children not wanting to return home because they feel it is unsafe there, so they are out committing crimes.”

It is a problem with law and order and criminality.