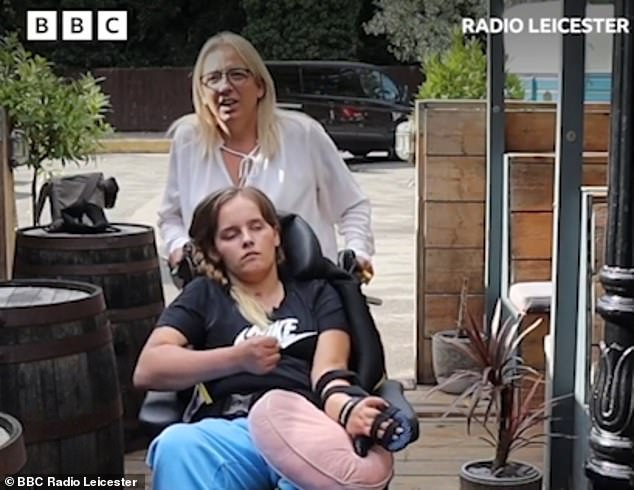 A mother whose daughter suffered terrible brain injuries after falling out of a moving truck at 60mph after being abducted by her wicked boyfriend reported that she was told her daughter would not survive the night.

Angel Lynn, age 21, was rendered paralyzed and unable to eat, move, or speak independently as a result of Chay Bowskill’s actions in 2020 on the A6 in Leicestershire.

Her mother, Nikki, was informed that Angel’s injuries were fatal, but she is regaining mobility on her left side and learning to swallow again.

Angel Lynn, age 21, was left paralyzed and unable to eat, move, or speak independently by Chay Bowskill’s actions in 2020 on the A6 in Leicestershire.

Mrs. Lynn stated on BBC Radio Leicester, “She was severely damaged.” They predicted that she would not survive the night and would not wake up at all. Currently, she is receiving extensive physiotherapy. She is participating in speech and language therapy.

‘She is relearning how to swallow, and when she is able to do so, she will no longer require PEG [percutaneous endoscopic gastrostomy] feeding, as she does not eat.

‘Her left side is beginning to move very slightly, and she has a communication device.

She communicates in bits and pieces, but she’s still really exhausted. It is wonderful that she comprehends everything you say.

Mrs. Lynn was “very appreciative” for the local community’s assistance in raising more than $170,000 for Angel’s care and home modifications.

She continued, “I did not anticipate the [community’s] response.” Everyone adores her immensely. We are extremely appreciative.

Angel’s mother, Nikki Lynn, is “very appreciative” to the community members who have helped collect more than £170,000 for Angel’s care and house modifications.

The family announced last month that they had been granted permission to extend their Loughborough home in order to accommodate Angel.

Plans include a wrap-around addition, a downstairs wet room, a pharmacy and laundry room, and a hoist that could move Angel to the living room, kitchen, and bedroom.

Angel will require specialized medical equipment and long-term rehabilitation, for which they have created a crowdfunding website in the hopes of raising enough funds to cover these expenses.

CCTV captured the moment Amanda was forced into a van by Bowskill and his accomplice Rocco Sansome in September 2020 in Rothley, Leicestershire.

Mrs. Lynn stated, “Every day, I bring her home from school.” She is doing so much better than she was, and we are very appreciative of the assistance we’ve received thus far.

“We took her to Twin Lakes and Twycross Zoo; she fed the animals and helped me hang out the laundry.”

‘Angel can now write a few things down, but not completely. We have a whiteboard, and you have to keep an eye on her because she occasionally writes letters on top of one other. On other occasions, her writing is crystal clear; I am so proud of her.

Yesterday, she even utilized her right leg to propel her wheelchair by pushing on the floor. She is scheduled to have surgery to straighten her left foot and possibly her right, as they have not been moved in a long time. Then, she will receive two braces to maintain the proper alignment of her foot so that she can finally stand.

CCTV captured the moment Amanda was forced into a van by Bowskill and his accomplice Rocco Sansome in September 2020 in Rothley, Leicestershire.

She subsequently fell out of the vehicle, which was being driven by Sansome, while it was traveling at 60 miles per hour, before being discovered by shocked members of the public.

Mrs. Lynn stated, “Every day, I bring her home from school.” She is doing so much better than she was, and we are very appreciative of the assistance we’ve received thus far.

Angel is currently receiving care at the Queen’s Medical Centre in Nottingham, and communication technology is scheduled to be installed on her wheelchair at the end of August. This will enable her to communicate with her loved ones by tapping letters with her right hand in order to form phrases.

While still being fed through a tube in her stomach, she is permitted to lick one ice pop per week in an effort to improve her swallowing.

Mrs. Lynn remarked, “We’ve seen an improvement after only three weeks of trying it.” She chooses the flavors she like, but the last time she wanted Vimto, one of the children already had it, so she had to settle for blackcurrant!’