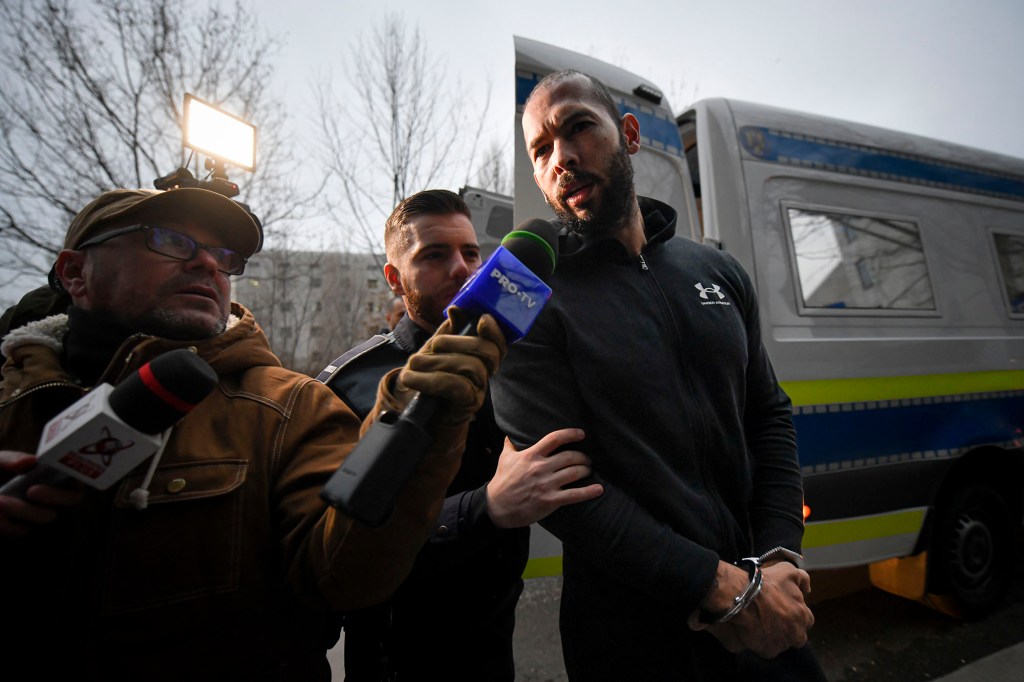 Andrew Tate, who is imprisoned in Romania on charges of sex trafficking and rape, criticized the criminal case that prosecutors are creating against him on Wednesday, stating that their case file was “empty.”

Tate told reporters as he was brought by law officials from a police van to the offices of DIICOT, Romania’s Directorate for Investigating Organized Crime and Terrorism, “They know we have done nothing wrong.”

“This file contains no data. Obviously, that is unjust; unfortunately, there is no justice in Romania,” he concluded.

The self-described sexist said, “Of course not,” when asked if he had harmed women.

Wednesday, prosecutors conducted forensic investigations of digital devices in an effort to collect additional evidence in the case.

Andrew Tate, who is incarcerated in Romania on charges of sex trafficking and rape, claimed on Wednesday that the criminal case file against him was “empty.”

Tate, 36, and Tristan, 34, together with two Romanian women, were detained in Bucharest on December 29 on charges of rape and organizing a criminal ring that exploited women to make pornographic content.

The judge determined last week that the brothers will remain in detention until February 27 for an additional month.

Prosecutors in Romania assert that the Tate brothers recruited victims through seduction, frequently feigning an interest in a romantic relationship or marriage with their victims before transporting them to residences on the outskirts of Bucharest

There, victims would be subjected to intimidation and physical violence while being compelled to produce pornographic content for major social networking platforms.

Since no formal charges have been filed, neither sibling has entered a plea. Earlier this month, they unsuccessfully appealed their incarceration.

In 2017, while being investigated for a 2015 rape in the UK, the former kickboxer relocated his now-defunct sex cam enterprise to Romania. Previously, he stated that he relocated to Romania because he preferred living in countries where corruption was widespread.

The rape case in the United Kingdom, which he adamantly rejected, was withdrawn without charges in 2019.

Upon their arrest in December, police raids of the Tate brothers’ houses uncovered heaps of cash, luxury watches, and even weaponry, including firearms, a hatchet, and swords. Several weeks later, the Romanian government seized their fleet of luxury vehicles.

Tristian Tate told reporters on Wednesday, “No evidence exists against me.” “The authorities intend to steal my vehicles and my money.” This is why I am incarcerated.”

Authorities have stated that the confiscation was meant to prevent the assets from being sold or hidden.