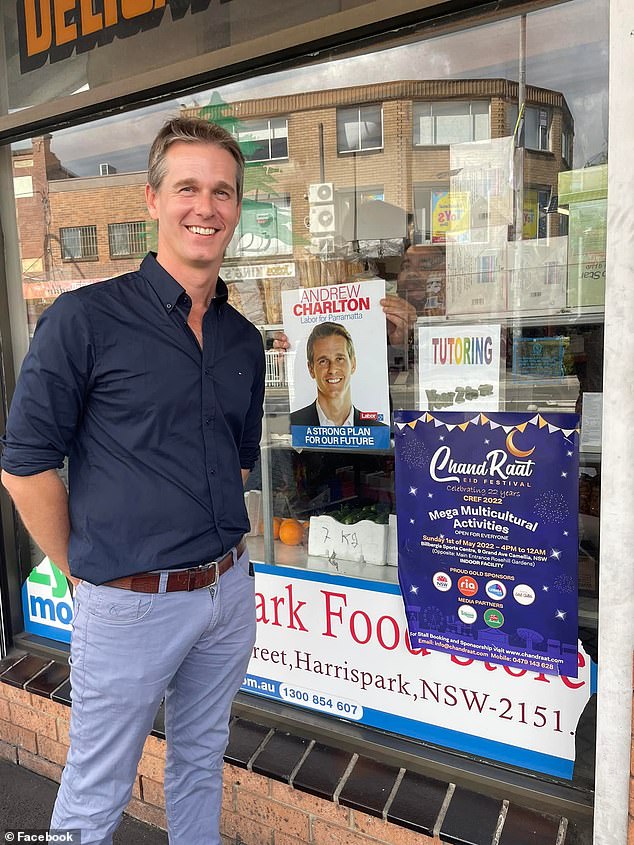 A wealthy Labor candidate who listed his residence outside of the western Sydney electorate he is running in has blamed the electoral breach on ‘oversight’.

Andrew Charlton registered his residence at a rental property owned by his barrister wife Phoebe Arcus in Woollahra, in Sydney’s eastern suburbs.

It comes despite Mr Charlton running for a seat in Parramatta.

The star Labor candidate currently lives in the western Sydney electorate after buying a four-bedroom house for $2million in North Parramatta in April.

Under the Commonwealth Electoral Act residents eligible to vote must update their enrolment a month after moving houses.

Mr Charlton blamed the error on oversight and said the records had been promptly updated.

‘Today my wife and I have updated our enrolment ­details,’ he told Daily Telegraph.

‘We both lead very busy lives and this was an oversight, for which I take responsibility and apologise.’

Mr Lobo is running in the ultra-marginal Queensland seat of Lilley, but living in a home outside of the electorate.

The Liberal National candidate claims they are enrolled in the electorate after they signed a lease for a house in Everton Park.

Labor has accused Mr Lobo of taking part in enrolment fraud with the house in the Lilley electorate appearing to be uninhabited.

The Coalition has called out Labor for the double standards and demanded Mr Charlton be investigated.

Mr Charlton’s admission means Labor must meet the standard they have set and refer their candidate to the AFP for investigation,’ a campaign spokesman said.

‘Given Labor have said other candidates accused of this very offence should be disendorsed, it is on Mr Albanese to justify how Mr Charlton can still be Labor’s candidate for Parramatta.’

Opposition leader Anthony Albanese was pressed by reporters on Saturday whether he would refer the matter to the AFP.

‘I’m not aware of the issue in which you raise, so I can’t comment,’ he said.

Mr Albanese said the matter of the Liberal National candidate had been handled by the Electoral Commission and he expected the electoral laws to be upheld.

‘The Electoral Commission took action on that and referred the candidate for Lilley to the AFP,’ he said. ‘I expect the rules to always be upheld.’

Mr Rudd told the ABC: ‘He is a highly talented individual, brilliant economist…and he helped me get Australia a permanent seat on the G20.’

The Sydney university graduate was a Rhodes Scholar who got his PhD in economics from Oxford University in the UK.

He’s written books on economics, including Oznomics, which argued for workers’ rights and government investment in technology and education.

The father of three founded an economics consultancy AlphaBeta which he later sold to global consultants Accenture, prompting the purchase of his $16million mansion with spectacular views across the eastern suburbs and Bondi coastline.

The classic six-bedroom property was previously home to MamaMia! founder Mia Freedman and her husband Jason Lavigne, and is just down the road from media magnate Lachlan Murdoch and his wife Sarah.

Mr Charlton is fighting to keep Parramatta for Labor after the retirement of the current MP Julie Owens, who won the seat in 2019 with a slim 3.5 per cent margin.