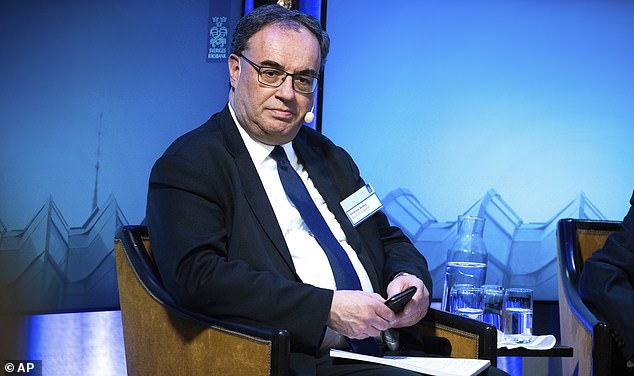 The Governor of the Bank of England has stated that interest rates could reach a top of approximately 4.5 percent this year as he forecasts a “rapid decline” in inflation.

Mr. Bailey oversaw another hike in the Bank’s base rate from 3% to 3.50% at the conclusion of the previous year.

This was the ninth consecutive increase, bringing the level to a 14-year high for the struggling British people.

There are broad predictions that the Bank would raise its key interest rate to 4% at the start of next month.

However, Mr. Bailey warned that we may not be far from the pinnacle of interest rates.

During an official visit to South Wales, the Governor explained to the Business Live website of the Western Mail how the Bank had previously challenged market forecasts of peak rates with which it disagreed.

Mr. Bailey oversaw another hike in the Bank’s base rate from 3% to 3.50% at the end of last year.

The annual CPI rate of inflation was 10.5% in December, down from 10.7% in November, according to data released yesterday.

Mr. Bailey stated, “We don’t aim for a specific peak, but I will say that, back in November, and quite atypically for us, we thought the market curve, and therefore the market’s view of what they thought we would do, was inconsistent with our own thinking.”

Following the events of September and October, there remained what I would term a “UK risk premium” remaining.

“At the peak of that period, the market anticipated an interest rate of over 6 percent.”

“Now, I am not endorsing 4.5 percent, but you may have noticed in December that we omitted the remark we made in November about the market being, in our opinion, somewhat out of whack.”

According to data released yesterday, the annual rate of inflation as measured by the CPI was 10.5% in December, down from 10.7% in November.

Mr. Bailey added that, according to the Bank, the significant spike in prices would continue to moderate for the remainder of 2023.

The Governor stated, “The most likely outcome is that it will fall quite rapidly this year, likely beginning in late spring, and this has a lot to do with energy prices.”

‘Over the course of the winter, energy prices were rather stable, but we anticipate a precipitous decline for at least a few reasons.

It is, of course, an annual calculation, so the large base effects from the previous year will begin to diminish.

And unless something changes, it will begin to decrease pretty rapidly, as we demonstrated in our November report on monetary policy.

Since the beginning of the winter, energy prices in particular have begun to decline during the past few of months, and gas prices have dropped significantly.

However, Mr. Bailey maintained the Bank’s forecast that Britain will experience a recession.

“I am afraid, and I am aware that we have been labeled pessimists by saying, as we did in November, that we anticipate a recession,” he added.

It has the unfortunate quality of being both lengthy and shallow.

»Andrew Bailey of the Bank of England predicts a 4.5% interest rate peak«