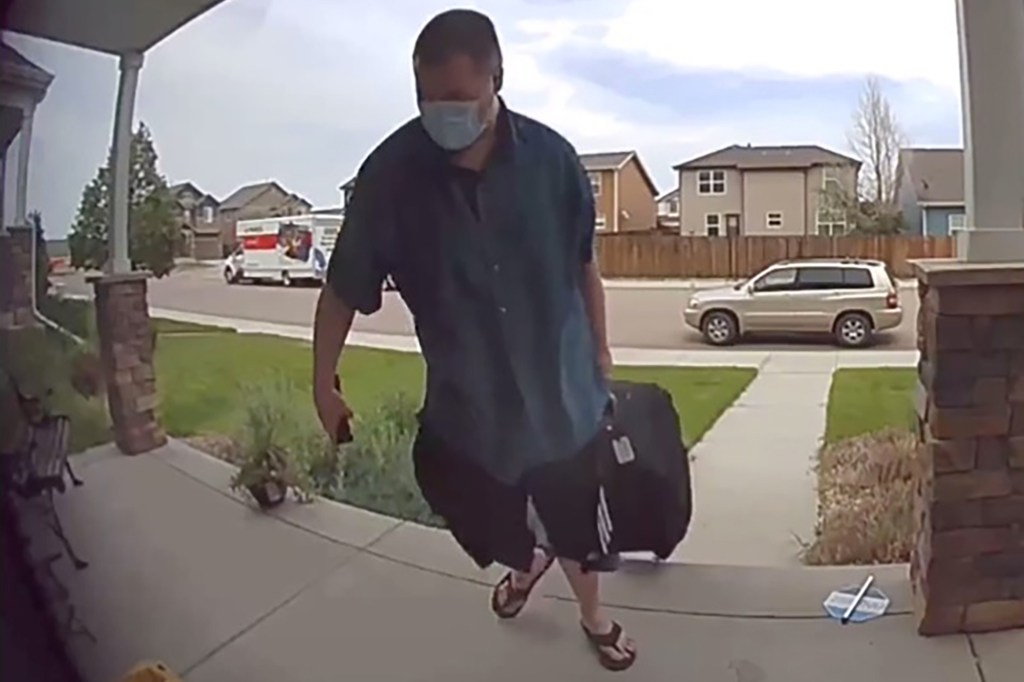 Accused As a child in California and Texas, mass shooter Anderson Lee Aldrich experienced a tumultuous upbringing that was mostly concealed by a full name change before his 16th birthday.

Nicholas F. Brink was Anderson’s birth name until he was 15 years old, according to documents obtained by The Washington Post.

He remains a registered member of the Church of Jesus Christ of Latter-day Saints, which until 2019 referred to those in same-sex marriages as “apostates”

His parents, Aaron Brink and Laura Voepel, divorced in July 2001 when he was a newborn, and he lived in Orange, California, and San Antonio, Texas, before settling in Colorado, according to public records.

His mother, the daughter of Republican Randy Voepel, who compared the Jan. 6 attack on the Capitol to the American Revolution, had multiple brushes with the law, including an arrest for arson in Texas in 2012, when her son was 12 years old, according to the news source. According to The Gazette, she also seems to have three outstanding warrants from previously in California.

Before his 16th birthday, Aldrich changed his name to Nicholas Brink, under which he had grown up.

Nick Brink’s YouTube page was created in 2010, when he would have been 10 years old, according to The Washington Post.

Two years later, it appears to have only produced one video, a profanity-laced, obscene animation titled “Asian homosexual gets molested by floating piece of f—le.” It has 416 subscribers despite having only posted one video. It consists primarily of characters using curse words.

A YouTube video with the same title contains only one profanity-laced clip.
YouTube/Nicholas Brink

At the age of 15, Brink was the subject of what a Washington, D.C., news station called as “a particularly brutal instance of internet bullying.”

A Wikipedia-like website was constructed containing his name, images, and online aliases, as well as a false biography filled with insults and scorn, according to the article, which did not identify the website.

It was unclear why he was targeted, but he shortly officially changed his identity to that under which he was arrested for killing five people and injured 18 others on Saturday night at Club Q in Colorado Springs.

Laura Voepel, the mother of Aldrich, also had frequent encounters with the authorities.

According to the story, he petitioned a Texas court using the identities of two of his grandparents — not his mother’s — to officially alter his name to Aldrich, without providing an explanation. It was unknown why he choose this name.

His grandparents appear to have played a significant role in his arrest in June of last year, when he filmed a four-hour standoff with police after being accused of threatening to blow up his neighborhood.

Relatives told The Gazette that Aldrich lost his mind when he learned that his grandparents were planning to leave Colorado and move in Florida.

In a video of the standoff in which he threatened to “blow it to holy hell,” he also stated, “Today is my last day. They no longer give a f–k about me. Clearly,” a local news source stated.

Despite being jailed for a bomb threat during a 4-hour standoff in June of last year, Aldrich seemed able to obtain the firearms reportedly used in Saturday’s Club Q attack.
CNN

He was accused with kidnapping and criminal threat, but he was never convicted. The case’s records have likewise been sealed.

The arrest also does not appear to have triggered the state’s red flag regulations, despite Aldrich’s claimed use of an AR-15-style rifle and other weapons and ammunition during Saturday’s mayhem.

Officials have frequently refused to disclose how or when Aldrich acquired his arsenal, and all papers related to his case have been sealed.

In 2019, El Paso County issued a resolution stating that the red flag statute “violates the unalienable rights of law-abiding individuals” by requiring police to “forcibly enter premises and seize a citizen’s property without proof of a crime.”

Mayor John Suthers stated on Monday that “we do not know” if the gun legislation would have applied in the situation and maybe stopped the assault if it had been in effect.

He told The Washington Post, “Hopefully there will come a moment when there can be a particular conversation about any past engagement with police enforcement” and the decision on red flag regulations.

Tom Sullivan, whose son was murdered in the Aurora theater massacre and who created the state’s red flag statute, stated that Anderson’s case in 2021 “should have warned them, placed him on their radar.”

Concerning the need to alert unstable gun owners, Sullivan stated, “We need heroes beforehand – parents, co-workers, and friends who sense someone going down this path.”

Jeffrey Swanson, a sociologist at Duke University and specialist on red flag laws, stated that the case in Colorado Springs might be an example of another ignored warning sign.

Swanson stated, “This seems like a no-brainer if the mother knew he had guns.” If weapons were removed from the equation, the narrative may have had a different conclusion.

Aldrich stayed in a local hospital after being attacked by two hero clubgoers who fought back with their own weapon and struck him with it. His situation has not been mentioned by authorities.

The Church of Jesus Christ of Latter-day Saints denounced the shooting while acknowledging that the alleged mass gunman is a member.

“We are deeply saddened and troubled by the terrible act of violence in Colorado Springs,” the church told The Washington Post.

“We are deeply saddened by all acts of violence in our communities and especially condemn violent acts motivated by bigotry towards any of God’s children.”

»Anderson Aldrich, the Club Q suspect, had a problematic background under a different identity«