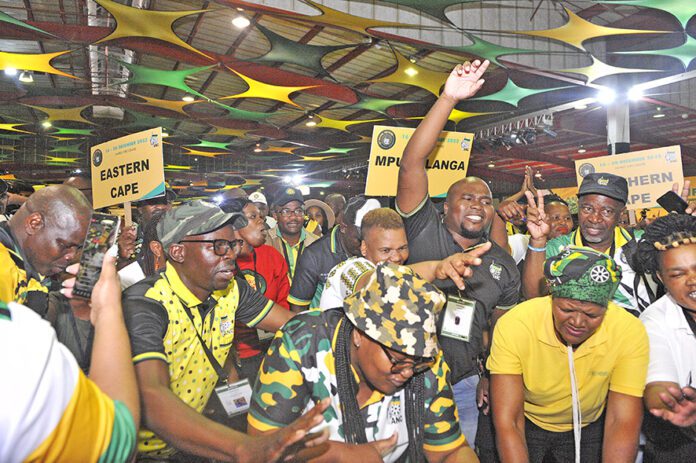 Following the party adjourned its 55th National Conference on Tuesday, allowing delegates to recover after protracted procedures, the ANC announced at the Nasrec Expo Centre on Wednesday the additional 80 members elected to its National Executive Committee (NEC).

On the list of 80 newly-elected members of the party’s highest decision-making structure, 41 are women and the rest are men, bringing the total number of women in the NEC to 44 after the election of three to the ANC’s top seven posts on Monday.

According to the chairman of the party’s electoral committee, Kgalema Motlanthe, there were 4,436 eligible delegates, but only 4,019 cast ballots. There were 133 invalid votes and only one abstention.

Dlamini was disqualified after failing the vetting procedure; at the time, the electoral committee stated that members previously convicted of crimes and punished for more than six months are ineligible to run for leadership posts in the NEC when the elective conference begins.

As minister of social development, Dlamini was found guilty and convicted of perjury after she lied under oath about her role in the 2018 South African Social Security Agency (Sassa) grant disbursement scandal. She was fined R200,000 and handed a suspended sentence of two years.

Dlamini disputed the decision of the electoral committee, but she was nevertheless elected to the NEC.

Lungisa, who ranked eleventh on the list, was also eliminated by the screening procedure. The candidate for treasurer-general, Lungisa, petitioned the electoral committee for interim relief after the Eastern Cape provincial executive committee (PEC) issued his membership suspension until 6 September 2023.

During a heated council brawl, he struck an opposition party member in the head with a glass jug and was charged with violating the ANC’s constitution.

According to newly elected secretary-general Fikile Mbalula, the previous NEC approved Dlamini’s candidacy, but a final decision on Lungisa will be taken on 5 January, when the conference reconvene.

The controversial right-hand man of President Cyril Ramaphosa, Bejani Chauke, who failed to make the top seven for treasurer-general, has also been elected to the NEC, along with Ramaphosa’s former spokesman, Khusela Diko.

Nkozazana Dlamini-Zuma, who was selected to compete for the top seven seat on Sunday but withdrew, has been voted to the NEC. Pule Mabe, the ANC’s spokesperson, was also elected.

Dr. Zweli Mkhize, the former minister of health, was elected to the NEC with 1,673 votes. Mkhize was defeated by President Cyril Ramaphosa, who has since been re-elected. Ramaphosa received 2,476 votes out of the total number of votes cast, while Mkhize garnered 1,897. None of KwaZulu-chosen Natal’s candidates made it to the top seven of the party’s list of favored candidates.

Despite the fact that the ANC in KwaZulu-Natal had previously stated that it would support Mkhize, delegates acknowledged on Monday that they had instead voted for Ramaphosa.

»ANC has announced the addition of 80 new NEC members«